You'd think this part of its business would be more successful. It's not.

For a travel website to prosper, it should ideally see growing business in every aspect of travel. Between hotels, airfare, rental cars, and attractions, travelers spend a lot of money, and investors look to TripAdvisor (TRIP -1.56%) to claim its fair share of that growing pie. Yet in large part due to rising competitive pressures, TripAdvisor has had trouble finding the growth that shareholders expect, and much of what's holding it back comes from a part of the travel business that you'd think would be doing better for the company.

Coming into Wednesday's second-quarter financial report, TripAdvisor investors were hoping that the online travel specialist would be able to accelerate its growth. Instead, challenging trends continued. At this point, it's going to take a lot to reverse the headwinds that TripAdvisor faces in one key area of its operations. 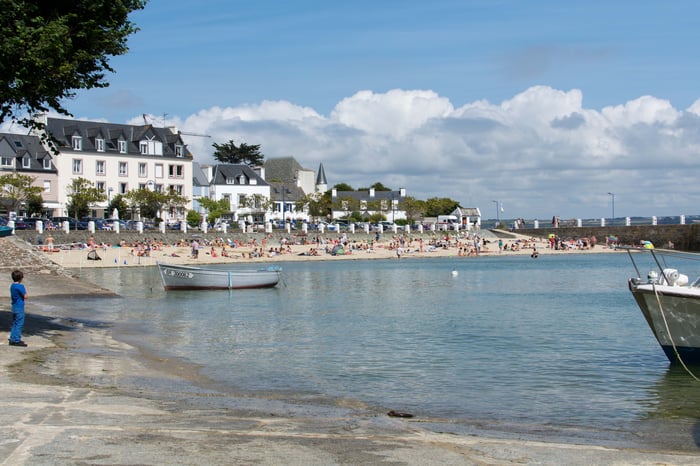 The numbers for TripAdvisor

TripAdvisor's second-quarter results were disappointing for those who had hoped that the travel specialist would regain some stronger positive momentum. Revenue climbed just 2% to $433 million, falling short of the $435 million that most of those following the stock had wanted to see. Similarly, adjusted net income rose just 9% to $58 million, and although the resulting adjusted earnings of $0.41 per share were $0.01 higher than the consensus forecast among investors, it still fell short of the double-digit percentage growth that some of TripAdvisor's peers have generated in the past.

Those who haven't followed TripAdvisor much will be surprised to learn that the key hotel business hasn't been a source of growth for the company lately. Segment revenue was down 4% in the hotel area compared to year-ago levels, and even on an adjusted basis, operating earnings growth of 6% lagged behind the rest of TripAdvisor's businesses. It took strength from the non-hotel side, where revenue soared 22% and adjusted operating earnings were higher by 18%, to salvage overall gains for the company.

A closer look at the hotel business shows the cross-currents that affected the company. TripAdvisor reported an 8% rise in display-based ad and subscription revenue, but that wasn't enough to offset a 7% drop in transaction and click-based ad sales. Revenue from branded websites and other miscellaneous sources dropped double-digit percentages, putting further pressure on the top line.

Yet once again, TripAdvisor was able to gain ground from an operational standpoint. User reviews and opinion counts were higher by 24% to 661 million, with increases across its information spectrum. You can now find more than 7.7 million places to stay and eat or things to do, with 1.2 million hotels and accommodations, 855,000 rental properties, 4.7 million restaurants, and 975,000 activities and experiences. TripAdvisor still boasted 149 million average monthly unique hotel shoppers, but overall visits reached 456 million, up 10% over the past year. In particular, sales of bookable experiences almost doubled to 121,000, showing the value of that side of the business.

Can TripAdvisor get back its mojo?

CEO Steve Kaufer was pleased with the results. "Operational changes have been taking hold," Kaufer said, "[as] our product and marketing initiatives continue to align with the needs of consumers and partners alike, while our investments in newer initiatives position our platform for future profitable growth." He also pointed to better business trends recently, building confidence about what the future will bring.

In addition, TripAdvisor seems confident about the future. The company still believes it will see hotel revenue fall in 2018, but rising non-hotel sales should be able to offset the downward pressure on the hotel side. More importantly, TripAdvisor thinks it can post positive operating earnings in both hotel and non-hotel areas.

One thing to notice, though, is that TripAdvisor didn't add any further buyback activity that it hadn't already discussed. That means no more repurchases between early May and now, and some investors might have taken that as a sign of reduced confidence about the near-term future for the stock price.

TripAdvisor shareholders weren't satisfied overall with the ongoing challenges in the hotel area, and the stock fell 11% in after-hours trading following the announcement. Until it can find a better way to take advantage of all the opportunities in the travel industry, TripAdvisor could see further struggles ahead.