Shares of Varex Imaging (VREX -1.55%) are plunging today, down 27% as of 1:27 p.m. EDT, after the company announced disappointing results for its fiscal third quarter following the closing bell yesterday. Investors are fretting about how a trade war will affect the X-ray component maker's growth prospects.

Revenue increased 12% year over year, but investors were expecting a whole lot more. Management blamed timing of customers' shipments and issues with customers not buying due to "tariff uncertainty."

The first issue of timing doesn't seem to be a major problem. After all, the cutoffs for quarters are arbitrary, so if the sales will just be booked in the next fiscal quarter, investors really shouldn't really be worried.

Customers not buying because they're concerned about tariffs could be a bigger issue for Varex Imaging. The company sells X-ray imaging components, such as X-ray tubes and digital detectors, some of which are shipped to China, where they're made into X-ray imaging systems. It appears those Chinese companies are worried about China slapping a tariff on Varex's U.S.-made products or are concerned about not being able to sell their systems into the U.S. because potential tariffs will increase the systems' overall costs, making it hard to compete with U.S.-manufactured systems.

CEO Sunny Sanyal said, "While the ramp-up of CT tube shipments to our Chinese OEM customers has been slower than planned, shipments have begun and we continue to believe in our long-term growth prospects."

But investors clearly aren't buying it. 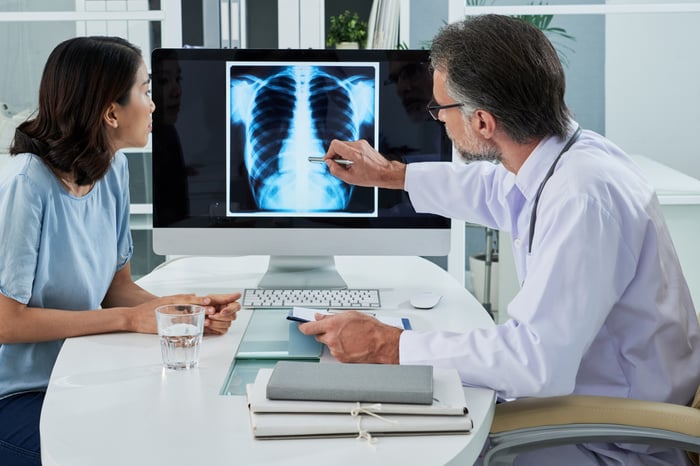 If you think the talk of a trade war is overblown, then now could be a great opportunity to grab shares of Varex Imaging on the cheap. Investors without any insight into whether trade war banter will turn into massive tariffs should probably stay away until it's clear that Varex Imaging's customers are buying again.