Some cryptocurrencies have skyrocketed in value in recent years. While riding that wave on the way up can be fun, it's important for crypto speculators to remember that cryptocurrencies are also prone to huge swings on the downside, too.

Knowing that, we asked a team of Motley Fool contributors to share a stock that they believe holds explosive growth potential but is much less risky than crypto assets. Here's why they highlighted Synopsys (NASDAQ:SNPS), Best Buy (NYSE:BBY), and Novocure (NASDAQ:NVCR). 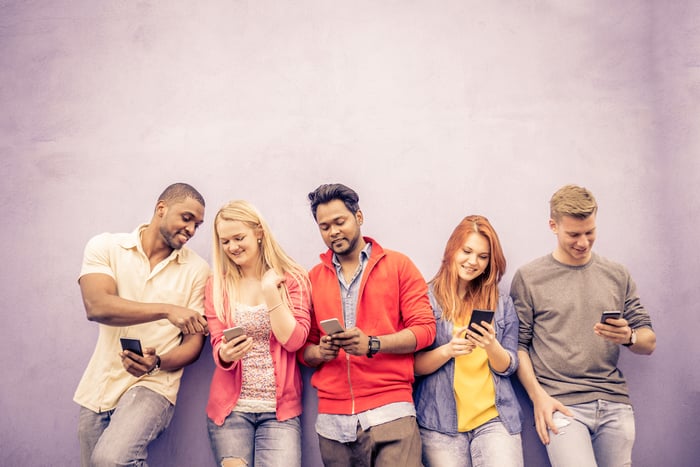 One trend that benefits Synopsys is that many companies are starting to design their own chips.

Synopsys isn't just making pie-in-the-sky promises about the future, though. The company said that its revenue from electronic design automation tools "continues to outpace the competition" (suggesting share gains) and revenue from its intellectual property "continues its double-digit growth."

This all seems to be translating nicely into tangible financial results as the company says that it's "on track for a record revenue and earnings year." Synopsys' revenue guidance for the year is between $3.07 billion and $3.1 billion, with non-GAAP earnings per share expected to come in between $3.76 and $3.83; at the midpoint of each of these ranges, Synopsys' revenue and earnings-per-share growth would be 13.2% and 10.9%, respectively -- both representing good growth.

The stock isn't super cheap -- it's trading at around 23.54 times the midpoint of its non-GAAP revenue guidance -- but considering its strong execution and the opportunities that seem to lie ahead for the company, the shares still seem worth a look.

Tim Green (Best Buy): Six years ago, consumer electronics retailer Best Buy looked like a risky stock. Not as risky as bitcoin -- few stocks are. But Best Buy was struggling, and it desperately needed a change of course.

Fast-forward to today, Best Buy is thriving. Under CEO Hubert Joly, the company has completely turned itself around. Best Buy has made its prices more competitive, slashed unnecessary costs while investing in customer-facing labor, and greatly improved its e-commerce business. It's a true omnichannel retailer, leveraging its stores for online order pickup and for fulfilling some online orders.

The results are nothing short of miraculous. During the first quarter, for example, comparable sales surged 7.1% and adjusted earnings per share jumped 37%. The company is using its rock-solid balance sheet and ample free cash flow to buy back a boatload of shares, with plans to spend at least $1.5 billion on share buybacks in fiscal 2019.

Those buybacks are good news for investors because the stock isn't all that expensive. After backing out the net cash on the balance sheet, Best Buy stock trades for around 14.5 times the midpoint of the company's fiscal 2019 guidance for adjusted earnings.

Best Buy's growth won't remain this strong forever. Slowing demand for smartphones could put a dent in the company's growth rate, as could tariffs that push up prices for TVs and appliances. But given the valuation and Best Buy's track record under Joly, I think the stock is a good bet.

Brian Feroldi (NovoCure): The biggest draw of crypto assets is that they hold massive upside potential if they eventually go mainstream. That's why I think that NovoCure is a good substitute for these types of investors because the company holds a similar amount of upside potential.

NovoCure is a medical device company that is focused on cancer. The company discovered that electric fields can be used to inhibit cell division in cancerous tumors and created a product called Optune to commercialize this property.

Optune is currently FDA approved to treat glioblastoma multiforme (GBM), which is a deadly form of brain cancer. Just over 2,100 patients were actively using the device to fight the disease as of the end of June. That might not sound like much, but that small patient population translated into $61.5 million in total revenue last quarter.

What's exciting about Optune is that the device has barely scratched the surface of what's possible. More than 12,000 patients are diagnosed with GBMin the U.S. each year. The number gets even bigger when you include the rest of the world (the company is actively selling Optune in Germany, Japan, and Austria).

The opportunity ahead in GBM remains large, but the most exciting thing about NovoCure is that studying Optune in several other types of cancer such as lung, pancreatic, ovarian, mesothelioma, and more. To give you a sense of scale, about 300,000 Americans are diagnosed with lung, ovarian, and pancreatic cancer each year.

It remains unknown whether Optune will ever win approval in any of those other disease states, so NovoCure is a riskier-than-average stock. However, the opportunity ahead is so large that I believe this company is still a great choice for risk-loving investors.