With data in hand showing how early riders have been using its autonomous vehicles, Alphabet has inked partnership deals that cater to their most common needs.

Alphabet's (GOOG -3.29%) (GOOGL -2.75%) Waymo is the undeniable leader in the driverless car space. So far, the company has logged 8 million miles of real-world autonomous vehicle testing.

It's already getting the public involved in those tests, most notably in the form of its first rider program in Phoenix, where members have access to Waymo's vehicles for everyday use. Last week, the company announced a move to take this pilot program one step further: Waymo will soon partner with Walmart (WMT -1.33%) to offer rides to and from the retail giant's Phoenix stores.

When participants in Waymo's early rider program order their groceries at Walmart.com, Waymo vehicles will be sent to their homes, and take them to Walmart to pick up their orders. Waymo says the users of the service will also get discounts on their purchases.

Theoretically, participants in Waymo's early rider program in Phoenix could have already been using the self-driving vehicles to travel to and from Walmart, so why is this a big deal? Primarily because Waymo can use the partnership to prove how well its service is suited for everyday errands. 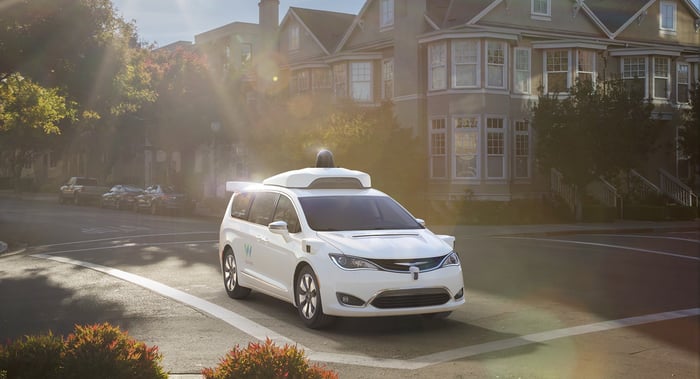 Normalizing driverless cars for everyday use

Waymo is also teaming up with the real estate investment trust (REIT) DDR Corp, to transport people to its Ahwatukee Foothills Towne Center mall in Chandler, Arizona, for dining and shopping options. And it's expanding its partnership with Avis, offering rides to customers who are picking up or returning rental cars.

Finally, Waymo is also partnering with AutoNation -- a national automotive retailer -- to provide customers getting their personal vehicles repaired with access to a self-driving Waymo car instead of the traditional loaner vehicle.

Waymo says that these partnerships focus on eight out of the top 10 activities that its first users are most commonly using its cars for. As the company recently stated: "We know from our early riders that most of their rides are to run errands, shop for groceries, commute to work, head to dinner or fix their personal vehicles."

Here's why this is important for Waymo

These partnerships are just the first step toward a much bigger push for Waymo.

"While these are Metro Phoenix-specific partnerships today, these businesses are national and what we learn from these programs will give us a network of partners when we launch in new cities down the road," a recent company blog post said.

In short, these programs can easily be rolled out nationally in the near future. That's important for investors to note because Waymo is expected to expand its driverless car program soon. You may remember that the company agreed to purchase 20,000 cars from Jaguar Land Rover earlier this year, and it recently announced a deal to buy up to 62,000 minivans from Fiat Chrysler -- all with the goal of launching a  driverless vehicle ride-hailing service by the end of the year and into 2019.

With these trial partnerships, Waymo is proving that it's getting close to realizing its commercial ambitions. It's already figured out how potential customers will use its vehicles, an essential step in the evolution from research project to real business.

Last year, analysts at Morgan Stanley forecast that Waymo could be worth $70 billion in a decade or so. That estimate is based on the idea that the company could account for about 1% of all global miles driven by 2030, with 3 million of its autonomous cars covering about 65,000 miles per year apiece. That's the analysts' conservative view: Assuming the vehicles average more miles per year, or achieve higher revenue per mile, the estimates for Waymo's enterprise value rise to as much as $140 billion.

In short, Alphabet shareholders should recognize how close Waymo is to becoming a viable and valuable business for the company. Its latest partnership deals are just another reminder that Alphabet is taking its driverless car business very seriously -- and investors should too.