When Microsoft (NASDAQ:MSFT) acquired GitHub for $7.5 billion in stock, it sent a signal to the rest of the market: We are a developer-first company. Just listen to how CEO Satya Nadella put it when announcing the deal.

"According to LinkedIn data, software engineering roles in industries outside of tech such as retail, healthcare, and energy are seeing double-digit growth year over year, 25 percent faster than the growth of developer roles in the tech industry itself," Nadella said in prepared remarks. "As every company becomes a digital company, value creation and growth across every industry will increasingly be determined by the choices developers make."

He's absolutely right. And that's why the deal for GitHub makes so much sense. 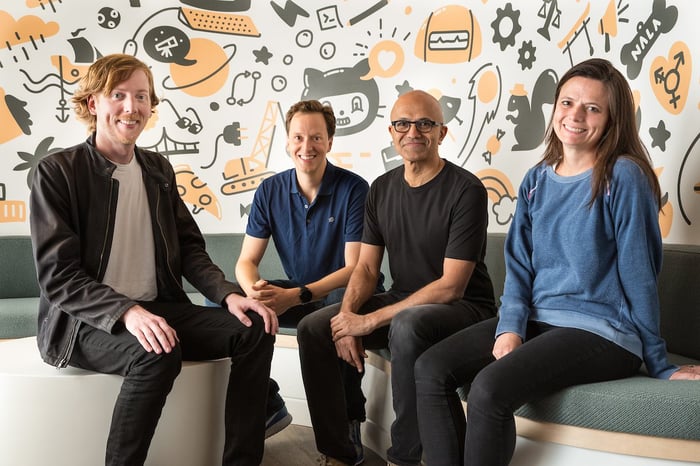 The gist on GitHub

Historically, Microsoft has been at its best when successfully courting developers. GitHub is where developers work -- more than 28 million actively collaborate there. Collectively, the site is home to over 85 million code repositories "used by people in nearly every country," Nadella said in announcing the deal.

But GitHub is also open, founded as a place where developers would collaborate to improve upon Git, a version control tool developed by Linux creator Linus Torvalds. Today it's a community where developers "commit" to projects they'll improve upon and contribute code anyone can use for any purpose. Think of it as part trading post, part truck stop. GitHub's social elements are why it's sometimes known as Facebook for developers.

Microsoft, it turns out, is the most active organization on GitHub, having contributed to over 2 million projects. The company is also doing far more in the open-source arena than in years past. The .NET framework that's popular for creating Windows-driven applications is now open source. So is the code base for the Visual Studio Code software development toolkit. Xamarin, a cross-platform environment Microsoft acquired that coders use to create software for Android, iOS, and Windows, also has open-source roots.

GitHub co-founder Chris Wanstrath praised Microsoft's open-source efforts during the call with analysts. "Their work in particular on open source has been inspiring. In record time, they've gone from dabbling to full-on embracing the community," Wanstrath said in prepared remarks.

No surprises there. Wanstrath will be paid well when the acquisition closes. And yet he's also speaking to the business case for acquiring his company: GitHub gets paid for hosting "private" software development projects, and is paid most for hosted code that it also keeps out of the public eye. The more large companies like Microsoft use, and contribute to, GitHub, the larger its revenue opportunity. (Annual revenue has more than doubled in the last two years -- from a reported $95 million in 2015 to $200 million last year.)

"From our earliest days, we have been a developer-focused company with our very first product, the BASIC Interpreter for the Altair in 1975," Nadella said. "Obviously, a lot has happened since then, but we still focus on creating tools and platforms for this new generation of developers. We've always loved developers, and we love open-source developers."

Will developers love Microsoft back? As it's the most active organization on GitHub, I think it's fair to say some already do, and the rest are probably more than willing to tolerate Microsoft's oversight of GitHub. If I'm right, we'll see the results in the number of open-source and custom code projects that come to live on Microsoft's Azure cloud, driving new revenue growth and higher profits.