Please ensure Javascript is enabled for purposes of website accessibility
Log In Help Join The Motley Fool
Free Article Join Over 1 Million Premium Members And Get More In-Depth Stock Guidance and Research
By Reuben Gregg Brewer - Aug 6, 2018 at 10:07AM

Although there wasn't much news behind the stock's dramatic price move, the excitement about a big new shareholder is ebbing

Clean Energy Fuels Corp.'s (CLNE -5.43%) stock fell 22% between the start and end of July according to data provided by S&P Global Market Intelligence. The month included two separate drops of more than 10%, an 18% plunge on July 5 and a 10% drop on July 9. The shares actually gained back some ground in the back half of the month. An analyst downgrade at Raymond James appears to be the main catalyst for the poor monthly showing.

Raymond James' Pavel Molchanov downgraded Clean Energy Fuels from outperform to underperform based on the natural gas distribution company's huge price run following the announcement that France's Total (TTE 2.21%) would buy up to 50.8 million Clean Energy shares (about 25% of the outstanding shares). The news of that deal pushed the stock up more than 100% between May and late June. 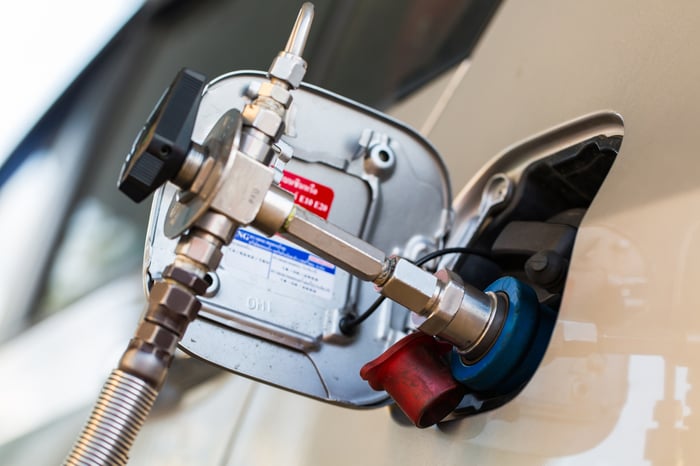 Essentially, Molchanov believed the stock had moved too far too fast. Investors appear to agree with that assessment as well, based on the July pullback. That said, Total's investment is clearly a huge statement of support for Clean Energy's business model and long-term prospects in a world that's shifting away from gasoline and toward cleaner, alternative fuels like the natural gas that Clean Energy distributes. Oil giant Total is making a concerted push into new areas, including taking a majority stake in solar company SunPower Corporation in 2011 and a recent agreement to buy a European electric and natural gas utility. Investing in Clean Energy is a continuation of the theme and a move that long-term investors should think about carefully.

It's hard to argue with the too far too fast argument for a stock that has a history of large price moves, notably to the downside -- despite a roughly 35% year-to-date gain through July of 2018 the stock is lower by around 78% over the past five years. But that's the past. It appears that Total sees a brighter future ahead for Clean Energy's business. The quick price jump following Total's investment may, indeed, have been an overreaction that is now correcting, but if you have a long-term focus in the energy sector, Total's investment suggests it's worth getting to know Clean Energy Fuels a little better, whether you end up buying it or not.