Managment recently explained the rationale behind their head-turning growth upgrades.

Investors have known for a while now that SodaStream's (SODA) business was on the upswing. But in its latest earnings report, the at-home sparkling water machine maker kicked things up to a higher gear. After posting accelerating sales growth and a large jump in profitability, the company dramatically hiked its outlook for both revenue and earnings in 2018.

In a conference call with investors, CEO Daniel Birnbaum and his team revealed additional details about SodaStream's second-quarter performance while explaining why executives are gaining confidence about growth over both the short and long terms. Below are a few highlights from that discussion (all quotes are Birnbaum's). 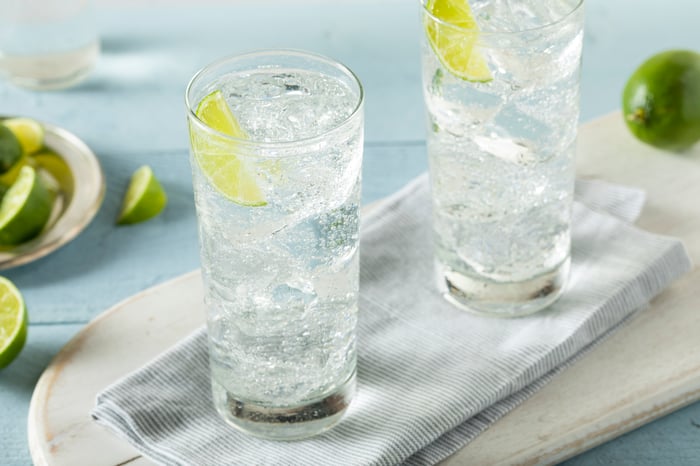 This is the second double-digit revenue growth quarter in the U.S., and we feel a sense of renewed momentum among our customers and consumers and enthusiasm among our U.S. team to chase the huge growth potential in the U.S.

Global sales growth was broad-based, with increases above 30% in each of SodaStream's three biggest geographic markets. Standout countries included Germany, France, and Canada, which shot up to become the company's fourth largest market following a 70% spike this quarter.

Executives were particularly pleased with firming demand trends in the massive U.S. market, where its newest lineup of machines is resonating with retailers and consumers alike.

SodaStream's new line of machines benefits from higher retailing prices and a lower base of manufacturing costs that's a consequence of the company's near-death experience back in 2015. Toss in sharply rising sales, and you have a formula for significant profitability expansion. 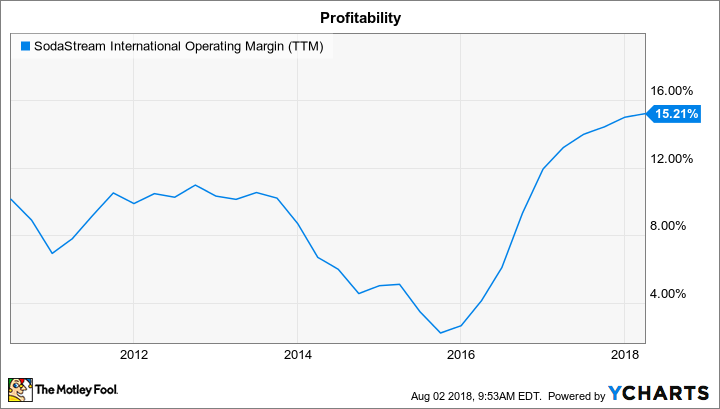 In fact, gross profit margin set a new record, at just below 60% of sales, and operating margin jumped to 18.5% from 12.9% a year ago. Executives credited their fixed cost base and innovative sparkling water makers as two of the biggest drivers behind that growth.

It's just the beginning

We are more bullish about our prospects for the second half of the year than we were 3 months ago. This is based on our strong momentum coming out of the second quarter, which is also adding to our confidence about the long-term trajectory of the business.

SodaStream is seeing robust demand from retailers as they begin preparing for the critical holiday shopping season. At the same time, consumer loyalty has never been stronger, with carbon dioxide canister refills jumping 17% to 9.7 million. Finally, the healthy sales and profit gains over the first six months of the year have put the company well ahead of the targets management raised back in May.

All of these trends combined to support a head-turning round of upgrades to SodaStream's 2018 financial goals. Sales are now predicted to rise 23% -- up from the 15% goal issued three months ago. Gross profit margin should climb to 58% of sales, not 55%. And operating income should jump higher by 44% rather than the 15% increase that executives outlined in early May. As a result, earnings are on track to improve by 31% instead of 8%. "It has been an amazing first half of the year," Birnbaum said as he concluded his remarks, and the momentum "is reflected in our increased outlook for the year."

Is SodaStream Stock Punching Out Too Soon?
420%