The move towards lower-margin services has some wondering if Shopify is all it's cracked up to be.

Few companies have experienced growth that can rival Shopify's(SHOP 3.62%). The company's platform allows anyone to set up a website and establish an e-commerce presence, a necessary service in an age when brick-and-mortar retail is dying out. Sales have boomed, going from roughly $100 million to $850 million in just three-and-a-half years, and the stock has followed suit, gaining 460% since going public in 2015.

The linchpin of the company is its Software-as-a-Service (SaaS) business model. The company develops a platform for businesses to use, then collects monthly subscription revenue. The costs of maintaining the platform are minimal, and Shopify locks customers into its ecosystem with high switching costs. Gross margins are sky-high at nearly 80%. 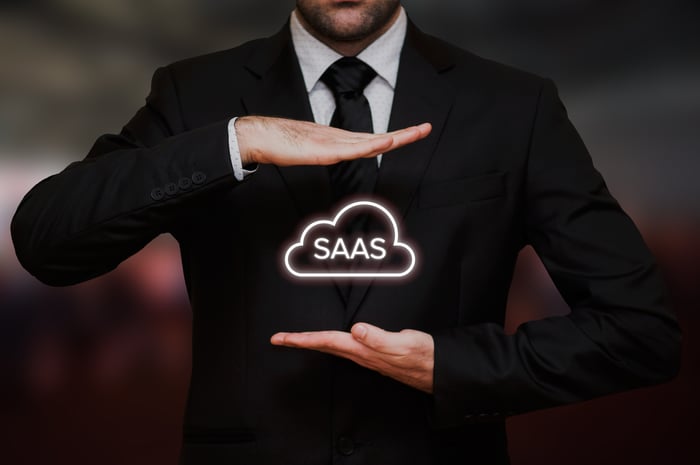 Before diving into the numbers, it's worth understanding the different businesses.

The traditional, high-margin SaaS offering is referred to as "Subcription Solutions." This includes:

Shopify Shipping is sometimes mistaken for an in-house logistics network. It's not; the company doesn't so much take responsibility for shipping as it fully integrates third-party software into the Shopify platform from companies like USPS, FedEx, and UPS.

The same goes for Shopify payments -- the company isn't processing the payments, just integrating third-party solutions (from Mastercard and Visa, for example) into its own platform. In a way, these are still software solutions.

But Merchant Solutions differs from subscription SaaS in two important ways: The solutions aren't developed by Shopify, leading to much lower margins, and revenue from these solutions isn't guaranteed -- it's based on the volume of things bought on Shopify's platform, rather than subscription payments.

As such, Shopify likes to refer to this as "success-based" revenue: The more successful its merchants are at selling stuff, the more revenue Shopify gets. It's worth mentioning, however, that it could just as easily be called "failure-based" when an economic downturn hits. While subscription revenue would likely remain stable in a crisis, merchant solutions could fall off a cliff as consumer spending dries up.

The trends at Shopify

If we peek at sales trends at Shopify, it's easy to see that Merchant Solutions has quickly overtaken the core SaaS business. 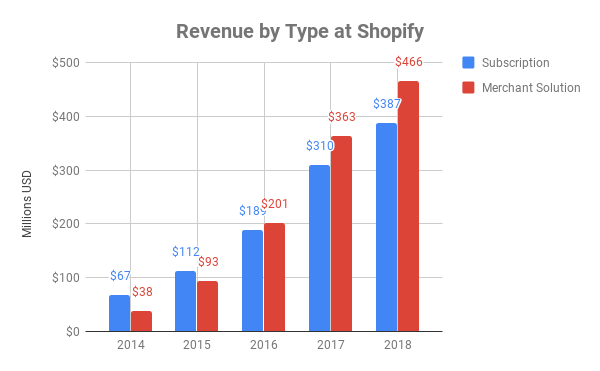 Just a few years back, merchant solutions was just 36% of all sales; today it's 55%. On the one hand, that means that Shopify is doing a great job at helping its merchants sell lots of stuff. On the other hand, it doesn't accurately portray how the company's gross profit is growing.

If we were to break out gross profit dollars by division, the picture would be very different. 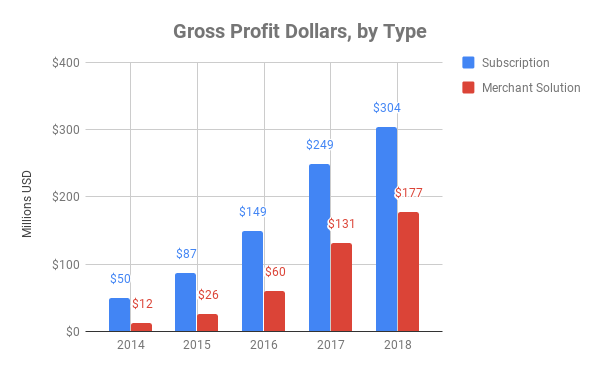 Given this, why would management even both with Merchant Solutions? The answer helps explain the over-arching approach management uses:

Here's what that means to the layman: Shopify doens't spend much of its own money on Merchant Solutions. It might only get to keep pennies on the dollar after paying the credit card company and the merchant, but it spends nothing to develop the tool. The same can be said for shipping.

Over the long run, such spending is still smart: Shopify has an enormous opportunity in front of it, and spending on infrastructure now helps guarantee that the company can fulfill its mission in the future. But it's worth noting that the SaaS growth comes at a cost -- a cost that Merchant Solutions don't have to worry about.

Currently, Shopify accounts for 5% of my real-life holdings. Given the stock's sell-off following earnings last week, some may have become concerned about the company. I'm not in that camp. I don't like to add to stocks once they grow that large in my portfolio, but I'm certainly not selling.

Shopify may not be a pure SaaS company anymore, but it's still very capital-light, and has excellent prospects. For investors who are looking to buy in today, here are two very important things to remember:

If you can balance these two realities while evaluating the stock, I believe you'll have a much better chance of making wise investment decisions with Shopify.