Co-CEO Safra Catz said in the Q4 press release issued in May: "Last year, I forecast double-digit non-GAAP earnings-per-share growth for FY18, and we delivered 14% growth this year, largely driven by strong growth in our cloud businesses."

But it was founder, chairman, and chief technology officer Larry Ellison who delivered the key anecdote: "Some of our largest customers have now begun the process of moving their on-premise Oracle databases to the Oracle Cloud. For example, AT&T (NYSE:T) is moving thousands of databases and tens of thousands of terabytes of data into the Oracle Cloud. We think that these large-scale migrations of Oracle database to the cloud will drive our [platform as a service] and [infrastructure as a service] businesses throughout FY19."

Maybe he's right. In the meantime, Oracle's cloud gains, impressive as they seem to be, aren't yet adding up to sustained net income growth -- and investors have noticed. Oracle stock has trailed the performance of the average S&P 500 index tracking fund over the past one-, three-, and five-year periods. 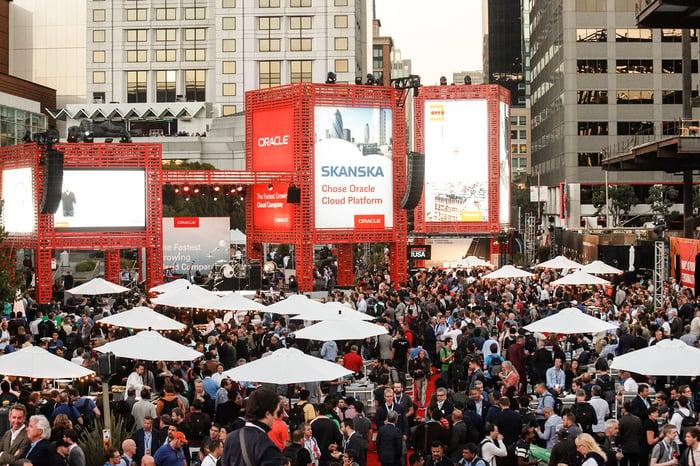 Part of the problem is that Oracle is deeply dependent on writing lucrative services contracts for not just cloud implementations but also for on-premises installations. And it wouldn't be at all surprising if the latter was the more profitable product.

How do we know? We don't -- at least, we don't know for sure. And yet there are a couple of key clues in the Q4 numbers. First, adjusted (i.e., non-GAAP) net income was up 7% when accounting for currency effects, and just 2% in U.S. dollars. Oracle recorded double-digit net income on both an adjusted and unadjusted basis in every other quarter of fiscal 2018 as well as last year's Q4. So when Ellison says AT&T and other big customers are moving "thousands of databases" to the Oracle Cloud, it may or may not be good news.

Certainly it would be good news if these cloud implementations were being migrated from another vendor's software. I'm not so sure that's the case. And even if it is, slowing net income growth tells me Oracle is paying a heavy price to get its customers into the cloud in the first place. Not exactly what I want to see as an investor.

Or maybe it is. Maybe there's a long-term plan here, and what's required is patience as Oracle transitions. Frankly, it's impossible to know looking at the numbers, and as I see it, switching up quarterly reporting in a way that I think obscures cloud results doesn't help.

The only thing that's clear: Oracle remains in a transition that could make the business much stronger and more profitable a few years from now, or maybe sooner. Right now, we don't know, and that makes buying Oracle stock risky -- even at what should be a bargain price of just 14 times estimated earnings.