Please ensure Javascript is enabled for purposes of website accessibility
Log In Help Join The Motley Fool
Free Article Join Over 1 Million Premium Members And Get More In-Depth Stock Guidance and Research
By Adam Levine-Weinberg - Aug 8, 2018 at 8:35AM

The airline's second quarter results and third quarter outlook were disappointing, but its stock is still likely to be a long-term winner.

JetBlue Airways (JBLU 2.17%) has had a rough year so far. Like most of its peers, the sixth-largest U.S. airline is facing a huge jump in its fuel bill. Meanwhile, overcapacity in some of JetBlue's markets has made it difficult to raise fares enough to offset the increase in fuel costs.

As a result, while JetBlue's earnings per share increased slightly in Q1, driven by the timing of Easter and a lower tax rate, adjusted EPS plunged 39% to $0.38 last quarter. The carrier also published weaker-than-expected guidance for the third quarter. This caused JetBlue stock to sink as low as $17.10. While it has recovered a bit in the past two weeks, the stock is still down almost 20% year-to-date. 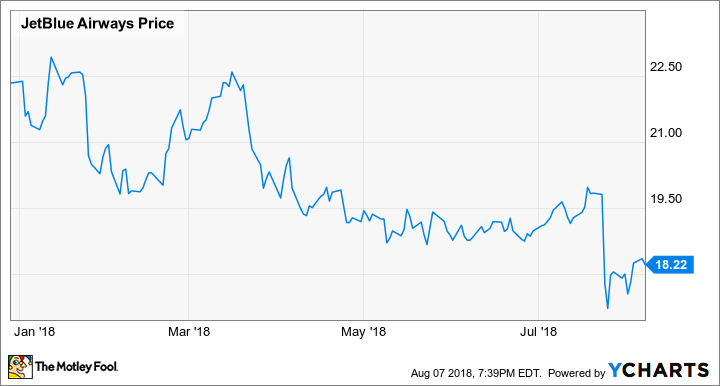 However, while JetBlue has suffered a setback, investors are underestimating its ability to make a strong recovery. As a result, I plan to hold all of my JetBlue stock for the foreseeable future.

A subpar quarter and weak guidance

Even that wouldn't have been enough to offset JetBlue's cost pressure. Adjusted nonfuel unit costs rose just 1.9%, but JetBlue paid $2.28 per gallon for jet fuel last quarter, up a staggering 42% year over year. The increase in jet fuel costs alone represented a roughly 7.5 percentage point pre-tax margin headwind in the second quarter.

JetBlue's third quarter forecast isn't much better. The carrier expects to post modest 0% to 3% RASM growth. Meanwhile, the price of jet fuel is set to surge 38% to $2.33 per gallon, up from $1.69 per gallon a year earlier. Nonfuel unit costs will also rise 3% to 5%, largely due to a new pilot contract containing big pay raises that was ratified in late July.

As a result, the average analyst EPS estimate for 2018 has plummeted from $1.78 three months ago to $1.50 today. 2019 EPS estimates have fallen hard as well. In this context, it's not surprising that JetBlue stock is struggling.

As noted above, overcapacity has been a major factor in JetBlue's recent slowdown in RASM growth. Some of this has been self-inflicted. For example, after slashing capacity in Puerto Rico in the aftermath of Hurricane Maria, JetBlue proudly announced in mid-June that it had returned to its full schedule there: six months earlier than planned. Yet barely a month later, the carrier acknowledged a downturn in RASM trends in Puerto Rico, indicating overcapacity.

Additionally, JetBlue told investors last month that it will face a roughly 1% RASM headwind in the third quarter related to a bumpy transition to a new platform for selling vacation packages.

However, JetBlue is cutting capacity in San Juan and other underperforming markets to shore up fare levels. In total, it has reduced its planned growth for the fourth quarter by 2 percentage points. JetBlue also plans to roll out new ancillary revenue initiatives to help offset the current headwind from the vacation platform switch. Finally, JetBlue will implement already-planned service cuts in Long Beach, California next month.

The net result is that RASM trends could improve significantly by the fourth quarter. JetBlue also expects nonfuel unit costs to decline in Q4, thanks to an easy year-over-year comparison -- and it will finally lap the first part of the recent oil price surge.

The longer-term outlook for JetBlue stock is bright

Looking ahead, JetBlue is poised to steadily improve its cost structure in the coming years. Two years ago, it laid out a target of limiting nonfuel unit cost growth to 0% to 1% annually between 2018 and 2020. Shareholders have been skeptical, but a major structural cost reduction program could enable the company to hit its medium-term cost target, boosting JetBlue stock.

Furthermore, fuel efficiency is set to improve dramatically in the coming years. JetBlue is just starting a project to add 12 seats to each of its A320s, which will improve that fleet's fuel efficiency by as much as 8%. The carrier will also add 85 A321neos to its fleet between 2019 and 2024. In a high-density 200-seat layout, they would probably be about 30% more fuel-efficient than the current JetBlue fleetwide average. Lastly, the A220-300s will use 40% less fuel per seat than the E190s they replace.

In total, JetBlue could potentially improve its fuel efficiency by 20% between now and 2025, while holding nonfuel unit cost inflation to a negligible level. As a result, even with modest RASM increases, it could see a huge improvement in profitability over the next seven years -- along with substantial revenue growth. With JetBlue stock trading for just 12 times analysts' reduced 2018 EPS estimates, there's a massive amount of upside for long-term investors.