Shares of Carvana Co. (NYSE:CVNA), an e-commerce platform for buying used cars with a handful of unique vending machine pickup locations, are popping 16% as of 10:55 a.m. EDT Thursday after the company's second-quarter revenue topped estimates.

Revenue continued flying higher during the second quarter with Carvana recording a 127% gain to $475.3 million, compared to the prior year, which easily topped analysts' estimates calling for $424.1 million. The top line was driven by a 111% increase in retail units sold, up to 22,570 units. Adjusted losses per share reached $0.37, which was higher than analyst estimates calling for a loss of $0.34 per share. 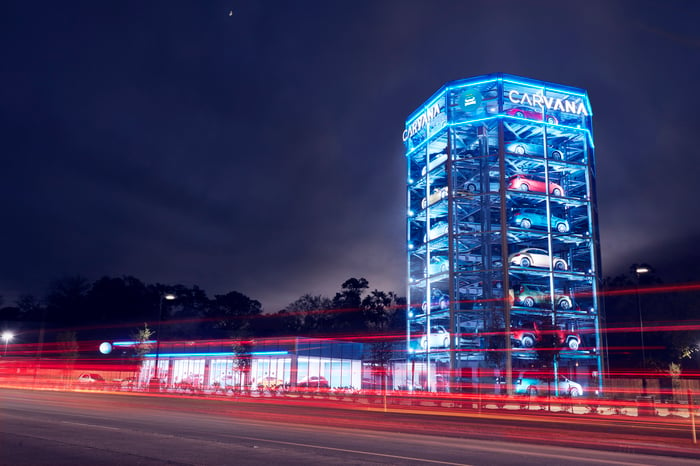 "We had a strong first half of the year and are on track for our fifth consecutive year of triple-digit revenue growth in 2018. We are well-positioned to benefit from continued momentum as consumers demand a new way to buy a car," said Ernie Garcia, Carvana co-founder and CEO, in a press release.

There was a lot for investors to be happy about, including total gross profit per unit jumping $672, compared to the prior year, to $2,173 -- an important aspect for investors. EBITDA margin also improved drastically from -16.1% to -8.8%. And while the company posted a wider loss than Wall Street anticipated, Carvana is in the early innings of growth and it's going to be expensive -- it opened nine new markets and four vending machines during the second quarter, bringing its total to 65 and 12, respectively. Looking forward, after a strong first half to 2018, management upped guidance for units, revenue, and gross profit per unit.