Shares of Sarepta Therapeutics, Inc. (SRPT 2.76%) were up 10.2% as of 3:52 p.m. EDT Thursday after the biotech reported better-than-expected second-quarter results after the market closed on Wednesday.

Sarepta announced revenue of $73.5 million in Q2, up 110% over the prior-year period. The company posted an adjusted net loss of $0.43 per share. However, that was an improvement from the $0.48 per share loss in the same period of 2017. It also came in better than the Zacks consensus estimate of a loss of $0.47 per share. 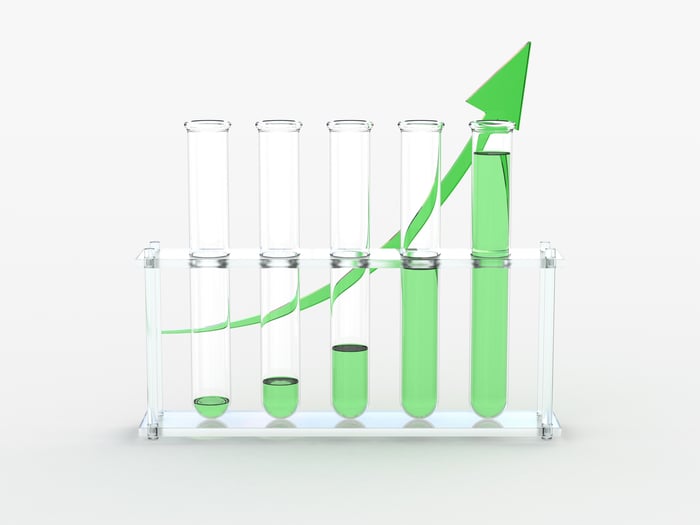 The big story for Sarepta is that its Duchenne muscular dystrophy (DMD) drug Exondys 51 continues to perform even better than many people projected it would. The biotech reported great sales results in the first quarter for the drug, and Q2 was even stronger.

It seems like ancient history now, but the prospects for Exondys 51 didn't look all that great just a couple of years ago. A U.S. Food and Drug Administration (FDA) advisory committee voted 7-3 against recommending approval of the drug in April 2016. However, the FDA stunned many observers by approving Exondys 51 anyway.

All of that is water under the bridge now. Physicians and patients are comfortable with the safety and efficacy of Exondys 51 based on Sarepta's Q2 numbers. The success for Exondys 51 also bodes well for the biotech's hopes to follow up with additional DMD drugs. Sarepta is evaluating two other drugs that target skipping of different exons of the gene that causes DMD in phase 3 clinical studies.

Investors will be eager to see if Sarepta can keep up the momentum when it reports its Q3 results three months from now. There are also a couple of other big milestones on the way.

A final decision by the Committee for Medicinal Products for Human Use (CHMP) of the European Medicines Agency (EMA) in reviewing the negative opinion for Exondys 51 should be made by the end of 2018. Sarepta also expects to complete its rolling FDA submission for DMD drug golodirsen by year end.

There's a key reason for investors to be cautious with the stock, though. Sarepta's market cap currently stands close to $8.8 billion. This level means that expectations of enormous sustained growth are built into the stock price. If CHMP gives yet another thumbs-down to Exondys 51 or there are any pipeline setbacks at all, Sarepta stock could take a nosedive.