Five years ago, in the thick of iPhone-mania, Apple (NASDAQ:AAPL) CEO Tim Cook shocked investors with the bold declaration that "[Apple] is not a hardware company." Cook's point was that a device sale was the beginning of a relationship, and the company would continue to profit from software and services revenue.

Cook has since backed up that lofty promise: Apple has nearly tripled revenue from software and services since then, making it Apple's second-largest revenue source. He noted that total subscription-based revenue increased 60% year over year last quarter.

However, it's possible that Cupertino is leaving money on the table. According to a report from Citigroup, the music industry is due for vertical integration. Much of Apple's services revenue comes from its subscription-based Apple Music service -- meaning Apple could be the next megalabel if it so desired. 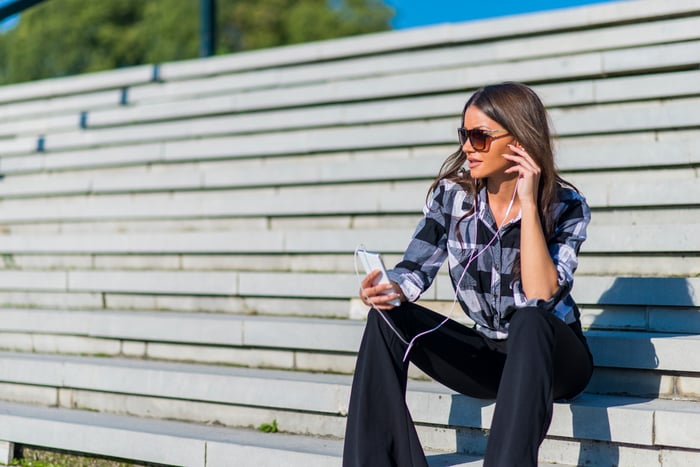 The music industry is thriving. Artists? Not so much

Citi's report paints a picture of an improving music industry. Total revenue -- including radio ads, consumer spending, and business licensing/publishing -- of $43 billion matches the high established in 2006. However, the distribution of direct consumer spending, the largest revenue source, has significantly changed: subscription services like Apple Music and Spotify are now the largest source of spending, versus physical purchasing in 2006.

One thing that hasn't significantly improved is the underlying economics: Artists are still receiving only 12% of total revenue. While this has improved from the 7% share they took in 2000, that improvement has been due to a focus on concerts and touring, rather than better splits from subscription and physical sales.

As a result, many artists no longer look to direct music revenue for the bulk of their earnings. An extreme example is Chance the Rapper: Chance opted not to sign with a label, and offers his music for free, which he uses as advertising for concerts and merchandise. This allows him to keep a larger portion of non-music revenue, keeping the percentage he'd normally be paying to a label.

Citigroup noted that vertical integration would be a way for this industry to evolve, with digital platforms allowing artists to release their music direct-to-consumer. Apple could quickly compete with the three biggest labels -- Vivendi's Universal Music Group, Warner Music Group, and Sony Music Entertainment -- while making its Apple Music product more compelling with exclusive artist releases. Apple is already becoming a publishing company, so this is a logical next step in the integration process.

Simply being able to claim a larger part of the revenue from Apple Music could be worth billions. Of the music industry's $43 billion of annual revenue, $18.2 billion is left for artists or various partners, while the rest is paid to retail outlets (including Apple), streaming service fees (including Apple), and various other vendors. Here's a breakdown of the revenue share: As the chart shows, in 2017, approximately $9.7 billion went directly to music labels, compared to only $5.1 billion going to artists. Apple could vertically integrate and offer artists better rates directly, which would help the company recruit top artists.

To be fair, labels serve critical functions like promotion, developing talent, and distributing risk by backing many artists. However, Apple would be able to circumvent the latter two by working with established artists, and will have no problem with the first considering that Apple Music already performs these functions.

If Apple wants to further boost its software and services division, it would make sense to increase revenue from this fractured industry.