But the real opportunity may be with Ionis Pharmaceuticals.

One year after Akcea Therapeutics ( AKCA ) was spun off from Ionis Pharmaceuticals ( IONS 0.92% ) in order to commercialize drugs to treat rare metabolic diseases, Akcea is poised for a European launch of its first drug. The company updated analysts on its plans when it gave its second-quarter report on Aug. 7, and the stock soared 14%.

Last month, Akcea was granted approval in the European Union to sell Tegsedi, a drug developed by Ionis to treat a progressive and fatal disease called TTR amyloidosis (ATTR). It plans to start shipping the drug in Germany as soon as the summer vacation season is over. And the company anticipates that in early October, the Food and Drug Administration (FDA) will approve the sale of the drug in the U.S.

Also fueling excitement about the company is the expectation of an FDA decision on a second rare-disease drug from Ionis, Waylivra, later this month, and top-line results for a third drug in coming months. 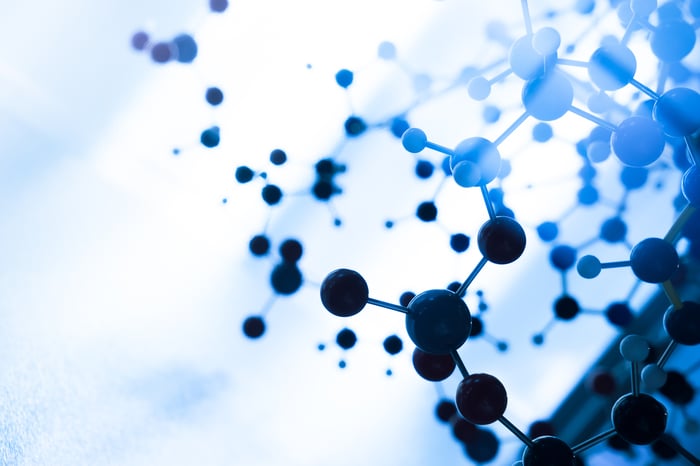 Akcea expects its cash and short-term investments will be sufficient to execute on all its priorities through 2019. Here are key numbers from the quarter:

What happened with Akcea this quarter?

The biggest news was that Akcea won its first-ever drug approval when Tegsedi was approved in the European Union for the treatment of stage 1 or stage 2 polyneuropathy in adult patients with hereditary transthyretin amyloidosis (hATTR). The drug, delivered by subcutaneous injection, is the first RNA-targeted therapeutic approved for the disease, and the first drug approved for hATTR to show benefit in quality of life and measures of neuromuscular disease.

Akcea has a second drug close to FDA approval. The FDA Advisory Committee voted in favor of approving Waylivra, Akcea's drug for the treatment of familial chylomicronemia syndrome (FCS), a rare disease that causes severely high blood lipids and can result in permanent organ damage or death. An FDA decision is expected later this month, and if approval is granted, it would be the first and only therapy indicated for people with FCS.

Akcea completed its licensing agreement with Ionis for the rights to commercialize Tegsedi and AKCEA-TTR-LRx, a next-generation drug for ATTR that utilizes a technology that increases potency and will expand the number of addressable patients. Akcea paid Ionis $150 million in the form of 8 million shares of stock at $18.75 per share for commercialization rights, and Ionis purchased $200 million of Akcea stock at the same price to help Akcea fund development of the drugs.

After the transaction, Ionis owns about 75% of Akcea, totaling 64 million shares. Akcea will still owe Ionis milestone payments, which it will make with newly issued stock, and the two companies will split the profits on the drugs.

What's ahead for Akcea?

The company is optimistic about the reception Tegsedi will get in Europe, and we should get some indication of that in next quarter's report. Meanwhile, though, the FDA decisions for that drug and Waylivra could provide nice boosts for the stock in coming weeks, if approval is granted. The decision date for Waylivra is Aug. 30; and for Tegsedi, Oct. 6. Based on efficacy results from trials of these drugs, approval seems to be a good bet.

Commercial success for Tegsedi is not a done deal even if it's approved worldwide; Alnylam Pharmaceuticals' ( ALNY -6.28% ) competing drug patisiran was approved by the FDA on Aug. 10. Alnylam's clinical testing showed cardiac benefits for patients whose cardiovascular systems have been affected by the disease, and Alnylam believes that will give patisiran an advantage over Tegsedi. But in the conference call, Akcea executives brushed off that concern and pointed to the advantage Tegsedi has in being an injection that can be delivered at home, versus patisiran, which is administered intravenously in a clinic. We shall see.

The other potential catalyst is the results from a phase 2 trial of the Ionis drug AKCEA-APO(a)-LRx, which treats cardiovascular disease caused by elevated levels of lipoprotein(a), a genetic trait found in 20% to 30% of the population. Results from that test are expected before the end of the year.

With some nice potential catalysts ahead, investors willing to take some risk may want to consider Akcea, but what about Ionis? After all, Akcea was spun off to commercialize drugs from Ionis, creating a revenue stream to fund further drug discovery and allowing Ionis to maintain a lean cost structure. The milestone and royalty payments were set up to split the benefits of commercialization between the two companies equitably, but for investors, it hasn't quite worked out that way. Since Akcea's first day of trading as a public company last July, the stock is up 268%. In that same time span, Ionis stock has fallen 5.6%. So far, Akcea's investors have reaped all the benefit from the news flow as commercialization gets closer.

The market's probably being shortsighted. Ionis will get 60% of the profits from Tegsedi, and Akcea will get 40%, with the split changing to 50/50 once the next-generation drug goes on the market years from now.

The opportunity is significant, too. Akcea president Sarah Boyce hinted at pricing in the latest conference call, citing a study that said rare-disease drugs are typically priced between $300,000 and $700,000 annually, and said that Tegsedi would not be priced at the high end of the range. Akcea believes that the label the EU granted means that there are 30,000 addressable patients worldwide, so a $300,000 price tag would imply a $9 billion addressable market. With competition, the companies won't get anywhere near that, but even a small piece would be significant for both companies, and more so for Ionis than Akcea. A Waylivra approval would add to the total.

Ionis has a lot more going for it than Tegsedi and Waylivra, with over 40 drugs in development. The value to long-term investors of its RNA-based platform should be increasing as the technology is proven out with drug approvals, starting with Spinraza -- which brought in $98 million in royalties for Ionis in the first half of 2018 -- and now with the EU approval of Tegsedi. But the market capitalization of Ionis is only about twice that of Akcea and has gone nowhere recently, suggesting that the stock price hasn't factored in all the implications of clinical success and agency approvals.

Drug approvals are never a sure thing, but the clinical results for Tegsedi and Waylivra suggest a reasonable probability that the drugs will cross the finish line. If that happens, shares of Akcea should continue to move higher. On the other hand, long-term investors would do well to realize that most of the profit will accrue to Ionis, a fact that the market has been overlooking.