The company will use its driverless vehicles to allow some members of the public to travel to and from public transportation.

The further we get into 2018, the more we're starting to see Alphabet's (GOOG -1.29%) (GOOGL -1.34%) Waymo driverless vehicle business taking shape. Since the beginning of this year, the company has announced deals to buy up to tens of thousands of vehicles for its upcoming public ride-hailing service, created a partnership with Avis Budget Group to have its self-driving fleet managed by the rental car company, and even launched a pilot self-driving trucking service for long-haul trucks.

The most recent announcement from Waymo involves its commitment to assist cities in making public transportation even more accessible. The company wrote in a blog post on July 31 that it's working with Valley Metro, the Phoenix-area public transportation authority, to launch a pilot program that offers self-driving vehicle rides for Valley Metro employees to get them to and from the city's buses and light rail.

While the program will begin with employees starting in August, Waymo plans to eventually expand it to Valley Metro RideChoice travelers, which the company says covers "groups traditionally underserved by public transit." 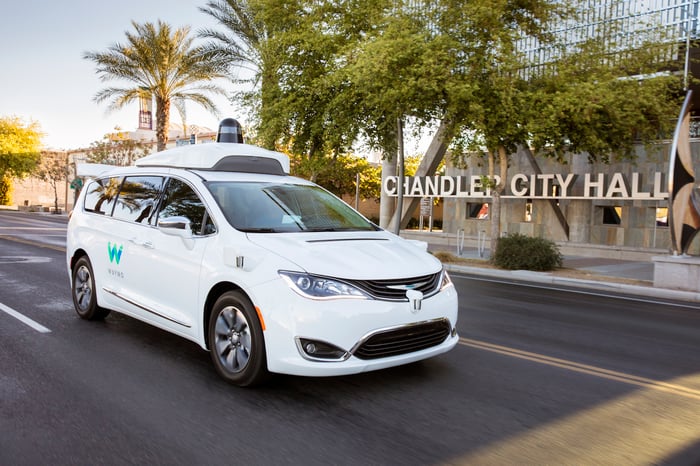 The long-term plan is to launch similar services in other cities as well. "Our goal is to focus on four areas: creating a ride-hailing service, developing self-driving trucks for logistics, licensing with OEMs for personally owned vehicles, and connecting people to public transportation," Waymo said in its post.

Waymo's partnership with Valley Metro helps it begin to deliver on its goal to connect people to existing public transportation services. Let's take a minute to explore why that's important for the company.

How this fits into Waymo's bigger picture

This program is clearly in the preliminary stages, and none of us should expect to call a Waymo car through its app and get transportation to a bus station or the subway anytime soon.

You may remember that the company made a deal earlier this year to buy up to 62,000 minivans from Fiat Chrysler and up to 20,000 cars from Jaguar Land Rover for its self-driving car service. Many of those vehicles may eventually be used for Uber-like services, but with this recent announcement, it's clear that Waymo is focused on a multipronged approach to self-driving services.

So why is that important? Chiefly because self-driving technology is still very much in its infancy, and none of these businesses are guaranteed to work. Waymo is doing the research right now to determine how people will use self-driving vehicles so it can take that knowledge and launch services on a grander scale down the road. Additionally, teaming up with cities and public transportation authorities gives Waymo a foot in the door to getting state and local governments to understand, and ultimately approve driverless vehicles for large-scale public use.

Waymo isn't making any significant money for Alphabet right now, but Alphabet investors should know that driverless cars, mobility services, and autonomous trucking will make up an estimated combined $10 trillion market in the coming decades. Ride-hailing services like the one Waymo is developing will account for more than half of the broad driverless car market.

Allowing riders to use its vehicles to access public transportation services could be a boon not just for riders but also for cities looking to reduce traffic and make their roads safer. And, of course, the move could eventually help Waymo monetize its services. The Waymo ride-hailing app is beginning to show hypothetical pricing to users of its Early Rider program according to a recent report from Bloomberg.  As Waymo continues to take steps to accomplish its core self-driving goals, it can soon focus its attention on generating revenue from its diverse consumer-facing and commercial initiatives.