Please ensure Javascript is enabled for purposes of website accessibility
Log In Help Join The Motley Fool
Free Article Join Over 1 Million Premium Members And Get More In-Depth Stock Guidance and Research
By Danny Vena – Aug 18, 2018 at 8:11AM

A couple of gems from the retailer's management show the company's strategy is succeeding.

There was a lot to like when Walmart (WMT -1.93%) reported the results of its just-completed fiscal second quarter. The company reported revenue of $128 billion, up 3.8% year over year, and adjusted earnings per share of $1.29, which climbed 19% compared with the prior-year quarter. Both crushed analysts' consensus estimates, which called for revenue of $125.97, and adjusted earnings per share of $1.07.

The closely watched comparable store sales in the U.S. increased an impressive 4.5% year over year, with gains in both foot traffic and spending per ticket. Sam's Club saw comps climb 5%, and Walmart reported positive comps in each of its largest international markets.

Beyond those metrics, Walmart provided investors with much more color in the prepared remarks that accompanied its earnings report. The company identified a couple of initiatives that it believes not only contributed to Walmart's impressive results this quarter but are also positioning the retailer for future success. 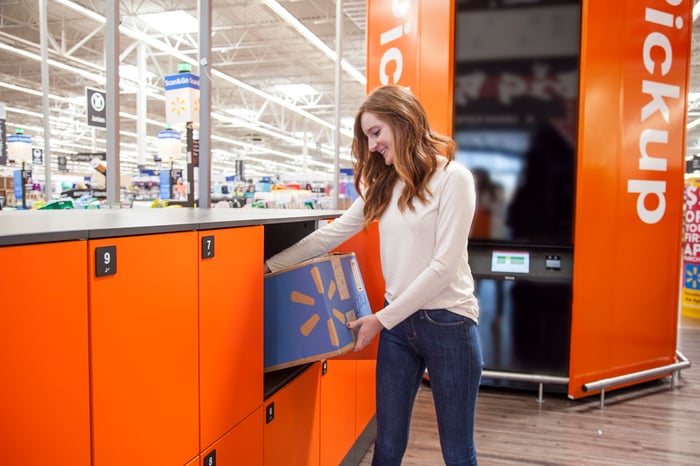 Brick-and-mortar retail and e-commerce were once very different and distinct experiences, but Walmart has engaged in a strategy that increasingly blurs the lines between the two.

One example of how Walmart is accomplishing this feat is through the use of Pickup Towers. These work similar to vending machines, holding orders that customers have placed online. Using the Walmart app on their phone, shoppers can then retrieve their items from the Pickup Tower.

"We're leaning into automated pickup towers for general merchandise," said Doug McMillon, president and CEO of Walmart. "Two years ago, we had no pickup towers and by the end of this year, we'll have more than 700."

Walmart says the response to this initiative has been overwhelmingly positive, encouraging the company to expand the program. The addition of lockers for larger items is now being rolled out with each new Pickup Tower. Walmart is continuing to invest heavily in this strategy, which will be within reach of 40% of the U.S. population by year-end.

Another way Walmart is eliminating the distinction between online and physical retail is by offering pickup discounts for items that are only available for purchase online. Customers can order the item and have it shipped to a Walmart store for pickup, resulting in an overall lower price for the product. Shoppers also have the option of ordering groceries online, which can then be picked up at the store or delivered.

Walmart believes that its associates are one of the keys to the company's success and has taken several steps to invest in its workforce. In his prepared remarks, McMillon said, "We're equipping our associates with the tools they need to better serve customers -- through improved apps, better training, higher wages, and education initiatives."

Walmart announced earlier this year that it was raising its hourly wage to $11 per hour, as well as expanding maternity and parental leave benefits, and helping associates with adoption expenses. 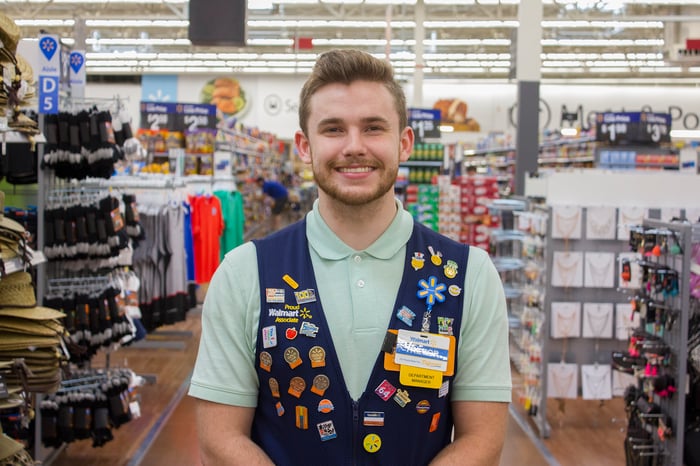 The Walmart Academy is another initiative aimed at employee development. These dedicated locations are found in or near Walmart Supercenters, and provide two to six weeks of training designed to provide a clear path for advancement for front-line hourly supervisors, department managers, and assistant managers. Employees who graduate from the program can also receive free college credit toward a degree.

That's not all. Earlier this year, Walmart partnered with a number of universities to make it easier for associates to go to school while working full time. Thanks to subsidies for the costs of tuition, books, and fees, Walmart employees can pursue a degree for just $1 a day.

Those initiatives appear to be bearing fruit. Walmart reported that it is experiencing better employee retention and lower turnover compared with last year.

The changing retail landscape has been difficult to navigate for brick-and-mortar stores, but by blurring the lines between digital and physical retail, and giving employees the tools they need to succeed, traditional retailers have developed a blueprint for success.

This strategy appears to be working for Walmart, as the success of its most recent quarter demonstrates.