The tech giant is getting more serious about hardware.

Alphabet's (GOOG -2.74%) (GOOGL -2.44%) Google makes most of its money from ads, which generated 86% of the unit's revenues last quarter. But it's also been expanding into the hardware market with Chromecast streaming devices, Nexus and Pixel-branded products, smart-home devices, and AR and VR headsets.

That strategy is surprising, since Google famously shunned hardware in the past. Back in 2007, Google vowed to never make any hardware. Yet Google changed its tune in 2012, when it acquired Motorola Mobility for $12.5 billion to produce first-party handsets. 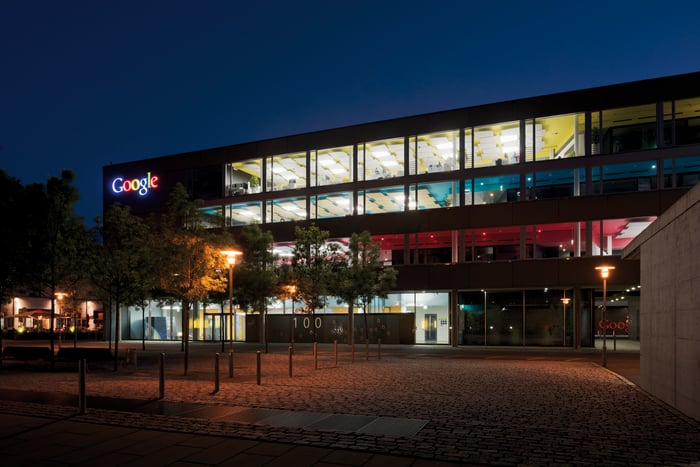 However, that acquisition bombed, and Google sold the money-losing unit to Lenovo for just $2.9 billion two years later. Google once again vowed to avoid hardware, but still worked with OEMs like Samsung and HTC (HTCKF) to produce Google-branded products.

In 2016, Google entered the hardware market again with its own Pixel smartphones and Google Home speakers. It also bought a large portion of HTC's smartphone business for $1.1 billion earlier this year.

With that purchase, Google clearly indicated that it wanted to challenge Apple (AAPL -2.01%), Microsoft (MSFT -2.20%), and Amazon (AMZN -1.65%) with new hardware. Let's take a closer look at four of those upcoming products.

Last year, Google launched the Pixelbook, a high-end Chromebook that targeted Microsoft's Surface devices and Apple's iPads and MacBooks. The Pixelbook received solid reviews, but many critics questioned its ability to win over Windows and macOS users, as well as Google's ability to pivot Chromebooks -- which are generally considered budget or education-oriented devices -- into the high-end market.

Google never released sales figures for the Pixelbook, but the base model's recent price cut from $1,000 to $750 at multiple retailers indicates that it isn't flying off the shelves. However, Google is still expected to introduce the Pixelbook 2 later this year, and recent rumors suggest that it should launch at the same price point with an upgraded CPU, a better webcam, and thinner bezels.

Google's Pixel 2 smartphones were produced by HTC and LG. HTC's Pixel 2 received better reviews than LG's Pixel 2 XL, which was affected by OLED screen defects and performance issues. That's probably why Google decided to buy HTC's Pixel-making division and oversee the development of the Pixel phones on its own. 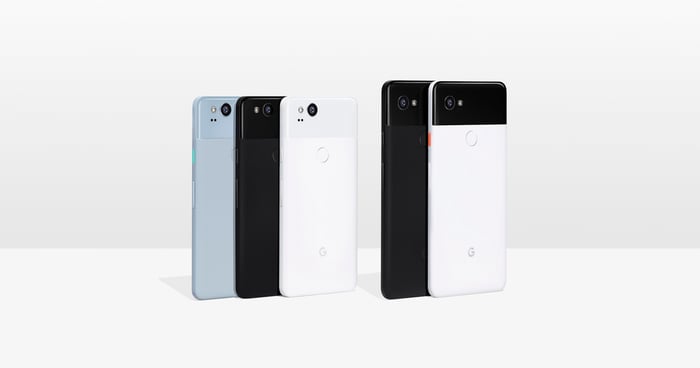 The Pixel 2 wasn't a hit device, but it appealed to consumers who preferred the stock Android experience over the skinned and customized versions of Android, which many other OEMs used.

Google is expected to introduce the Pixel 3 and Pixel 3 XL later this year, and leaked specs indicate that it could sport a newer Snapdragon 845 SoC, a 12.2MP rear camera, and an 8.1MP front camera with three sensors and could cost between $650 and $950. The flagship devices should go head to head against Samsung's Galaxy Note 9 and Apple's updated lineup of iPhones.

Google is also expected to launch the Pixel Watch, a high-end smartwatch that could be powered by the new Snapdragon Wear 3100 SoC and serve as a showcase device for Wear OS, which was previously known as Android Wear. Google will reportedly launch a new fitness-oriented platform called Google Coach with the device, which could counter the fitness features found on the Apple Watch and Fitbit's wearables.

However, Google faces a tough uphill battle in this market. IDC expects Wear OS to run on just 4.3% of all wearables this year, compared to a 16.2% share for Apple's watchOS. Wear OS also faces competition from other smartwatches running on other fragmented versions of Android, which could claim 6.4% of the market this year.

Lastly, Google is expected to launch a video-enabled Home speaker to challenge Amazon's Echo Show, according to a recent reports from Nikkei and 9to5Google. That move wouldn't be surprising, since Google Home has been gaining share against Amazon in the U.S. smart-speaker market.

Google's share of that market grew from 8.5% to 26.9% between this January and May, according to Voicebot.ai and Voysis. Amazon's share fell from 70% to 61.9% during the same period. If Google continues to launch a wide variety of Home speakers with various features at a wide range of prices, it could continue to pull consumers away from Amazon's ecosystem.

But will any of these devices move the needle?

Google's hardware business is expanding, but it probably won't become a major revenue stream anytime soon. Instead, investors should consider its Pixel devices to be "reference designs" that are aimed at spurring innovation among OEMs and promoting new versions of its operating systems. That's similar to Microsoft's decision to launch the Surface, which sparked a form-factor revolution in two-in-one devices.

As for home speakers, Google has a good shot at loosening Amazon's grip on the market, but it should be considered an ecosystem play that probably won't generate meaningful profits from hardware sales alone.