Pipelines will play a huge role in the United States' growing dominance in energy. North America is on track to be able to be completely energy independent from the rest of the world in a few short years, while exporting increasing volumes of natural gas, natural gas liquids, crude oil, and petroleum products. Pipelines will make it possible -- gathering production from the field, transporting it to regional processing facilities, then shuttling it to chemical manufacturing, refinery, or export infrastructure.

That alone should put pipeline stocks on the radars of investors. But don't forget the high yields, steady, predictable earnings and cash flows from fee-based contracts, and billions of dollars of growth projects under way. Two companies that fit that mold and are well-positioned to exploit the long-term opportunity are Kinder Morgan (NYSE:KMI) and Plains All American Pipeline (NASDAQ:PAA).

Both stocks sport yields of 4.4%. Both businesses are in the middle of a building spree in the Permian Basin. Which pipeline stock is the better buy? 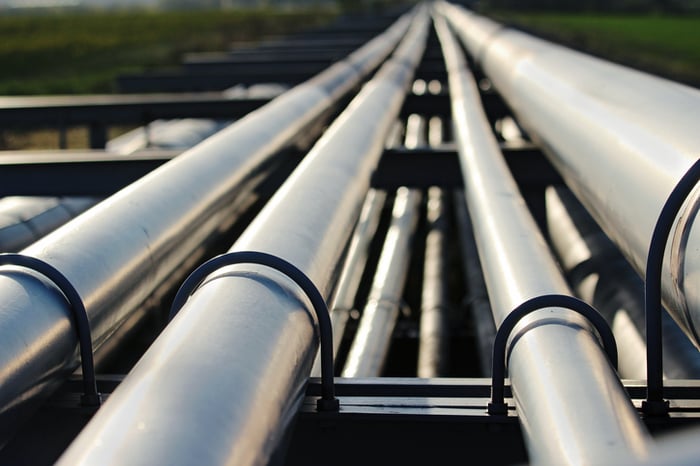 Kinder Morgan has had an eventful 2018. Earlier this year, the Canadian government swooped in to purchase its delayed Trans Mountain Pipeline for $3.5 billion, which would add about $2 billion to the balance sheet after accounting for the subsidiary's share of the bounty. While it was a relatively good outcome for shareholders, who'd experienced years of delays, the loss of the project also meant the company would need to replace hundreds of millions of dollars in annual earnings growth that was expected from the pipeline.

The natural-gas-focused business hasn't wasted much time putting that capital to good use. Kinder Morgan is building multiple natural gas pipelines extending from the Permian Basin to chemical and export infrastructure along the Gulf Coast. They're sorely needed, as record crude oil production in the region has pulled up billions and billions of cubic feet of natural gas with nowhere to go.

The Gulf Coast Express will move 1.98 billion cubic feet per day (Bcf/d) of natural gas when it enters service in late 2019, while the Permian Highway Pipeline is expected to transport another 2 Bcf/d when it comes on line in 2020. At a combined $3.75 billion, they won't come cheap, but they have committed partners and equity owners including Apache and ExxonMobil. The pipelines are also expected to handle up to one-quarter of all Permian Basin natural gas growth between 2017 and 2027.

In the long run, shareholders will likely benefit from an increased focus on booming energy production in the United States rather than the headache from the Trans Mountain Pipeline in Canada. It'll just require a little more patience in the short term. Full-year 2018 adjusted earnings before interest, taxes, depreciation, and amortization (EBITDA) are expected to settle around $7.5 billion, a 4% bump from last year. Distributable cash flow is only expected to increase 2% year over year. But management hasn't budged in its promise to grow the dividend from $0.80 per share in 2018 to $1.25 per share in 2020. With a healthy amount of growth projects just ahead, the confidence might be well placed. 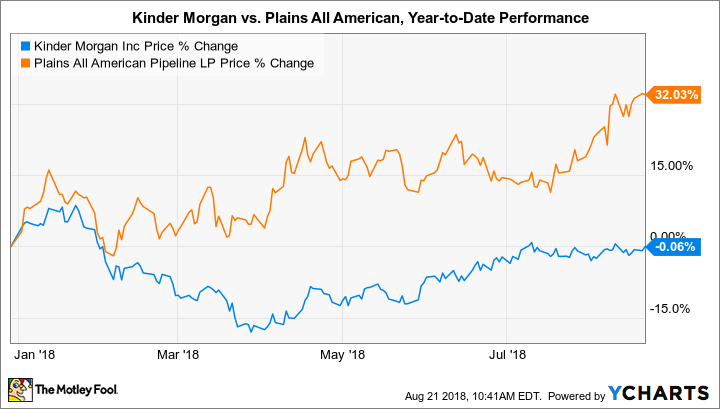 Plains All American is also hitching its growth wagon to the Permian Basin, but focusing on crude oil pipelines instead of natural gas. That's not a bad idea considering the region is expected to produce 3.5 million barrels per day (BPD) of crude oil -- one-third of the nation's total output -- by the end of 2018. That could nearly double to 6.4 million BPD by the end of 2023.

The company is all over the opportunity, aided by the fact it's already the leading pipeline operator in the region. In July 2018 it announced a new joint venture with ExxonMobil to build a 1 million BPD pipeline. Before that enters service, expansions to the company's Sunrise and Cactus networks currently in progress will add about 900,000 BPD of takeaway capacity. They can be expanded by up to another 900,000 BPD combined in the future if needed.

In all, Plains All American is expected to grow its Permian Basin crude oil pipeline capacity 2.3 million BPD by the end of 2019. That'll handle close to two-thirds of the volume increase required to support the region's expected production growth in the next five years. Unitholders could be handsomely rewarded after years of patience.

The business expects to deliver full-year 2018 fee-based adjusted EBITDA of $2.2 billion -- a record -- followed by another 14% to 15% increase in 2019. The expected earnings and cash flow boost will drive considerable financial flexibility and allow the company to comfortably and significantly increase the payout while maintaining healthy coverage. 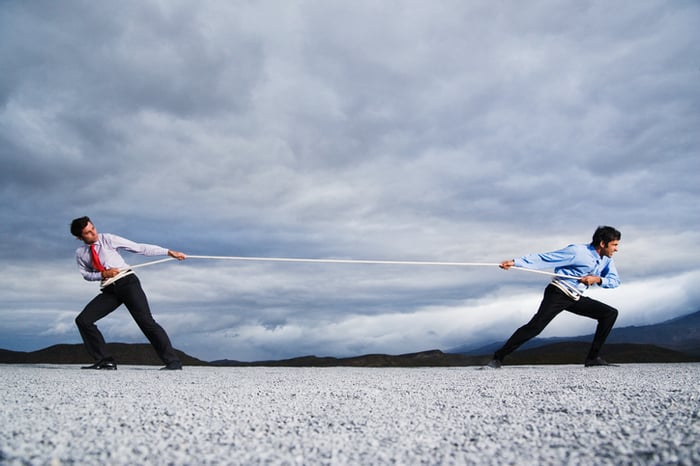 Both Kinder Morgan and Plains All American are looking to exploit the opportunities provided by bottlenecks in the Permian Basin. Both businesses had weaknesses exposed by collapsing energy prices in late 2014. But there were differences, and they're important to consider.

For instance, Kinder Morgan has simply not been very good at creating shareholder value over the years. It has been by far the worst performer of its peer group -- which is chock-full of companies that have faced the same obstacles and pressures concerning cost of capital, rates of return, and maintaining a healthy balance sheet. The inability to bring projects from the backlog into service without diluting shareholders and have the projects deliver the expected return has led to a 42% drop in share price since the company's IPO in 2011.

Plains All American has struggled, too, but mainly because of an outdated business model. As recently as 2013, the pipeline operator generated 39% of total adjusted EBITDA from margin-based business, which can really hurt when commodity markets turn sour. It also doesn't allow for much earnings -- to make debt payments or fund a distribution -- when energy prices are relatively low. The company has since pivoted its business model to rely on steady and predictable fee-based contracts, which is closer to what investors might expect from a pipeline operator. Last year, less than 5% of total adjusted EBITDA was derived from margin-based sales, with the rest coming from fee-based agreements.

So, although both high-yield oil stocks are poised for growth in the next five years or so, it might be difficult for investors to shake off the recent past of Kinder Morgan. That, coupled with impressive growth opportunities and shift in business strategy, makes Plains All American the better buy. That's not to say Kinder Morgan won't deliver on its stated goals, but the simple fact is that historically, it's disappointed shareholders.