CyberArk is pulling the right strings to secure long-term growth in a competitive market.

CyberArk Software (CYBR 2.12%) might not be a very well-known cybersecurity play, but that hasn't kept it from outperforming its more illustrious peers. The Israel-based company has been a stock market darling over the past year, and it isn't hard to see why. Take a look at how it compares to some peers. 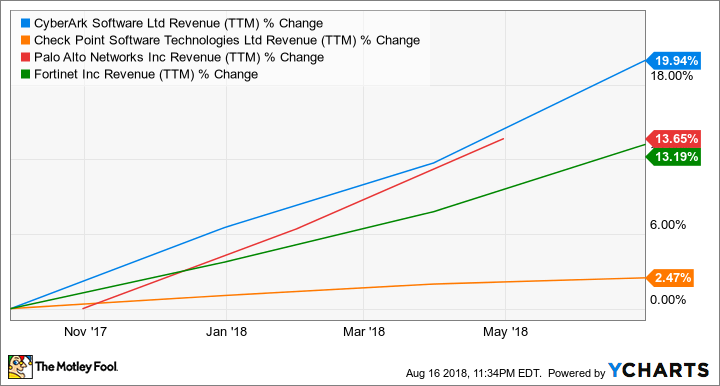 CyberArk has been consistently clocking strong growth rates, and the story was no different during the recently reported second quarter. It crushed Wall Street's expectations and issued strong full-year guidance that was enough to keep investors in high spirits. In fact, the key takeaways from the company's latest quarterly report will have us believe that it won't be losing its terrific momentum anytime soon. Here's why. CyberArk understands that it needs to aggressively augment its customer base to survive in a competitive and crowded cybersecurity industry, which is why it has turned up its spending on customer acquisition. Its sales and marketing spending went up 20% last quarter, helping it add 200 new customers and taking its total customer count to more than 4,000.

CyberArk had around 3,000 customers during the first quarter of 2017, so it has done well to add a thousand customers in the space of just over a year. But what's more important to note is the type of customers it is adding. New customers include four Fortune 500 organizations and 15% of its business comes from government contracts.

CyberArk signed 31 new deals with U.S. federal agencies last quarter, while a European government agency struck a seven-figure deal with the company to shore up its defenses after falling prey to hackers who stole privileged information. This is a great business to be in, as the cybersecurity budgets of governments are increasing year after year, and CyberArk's expertise in protecting privileged accounts puts it in a strong position to tap this trend.

For instance, the U.S. government's cybersecurity spending is expected to increase from $13.15 billion in 2017 to nearly $15 billion next year. But this is just one of the catalysts for CyberArk, as "privileged" access is a top cybersecurity priority, according to Gartner.

In fact, a CyberArk survey has found that around 90% of cybersecurity professionals believe that securing privileged accounts is a vital cog in shoring up an enterprise's IT infrastructure. This is a critical reason why its customers are spending more money on its solutions by buying add-on services.

Terrific bottom-line growth in the cards

CyberArk's increased marketing spending last quarter ensured that its sales growth accelerated. The company's revenue shot up 35% from the prior-year period, outpacing the increase in sales and marketing expenses. This is because the new customers signing up for CyberArk's services are buying more than just one solution.

More importantly, CyberArk looks all set to sustain its impressive top-line growth, as evident from the increase in its deferred revenue, which jumped 56% annually to $129.6 million last quarter. This was better than CyberArk's total revenue growth, indicating that the company is successfully locking in subscription customers and ensuring a steady stream of revenue for the future.

CyberArk looks well placed to accelerate its earnings growth given the strings it is pulling. Wall Street thinks the same, as the company's earnings are expected to increase at a compound annual growth rate of more than 26% for the next five years, up from the 16% growth rate it has clocked in the last five.

But this growth will come at a price. CyberArk trades at 168 times trailing earnings and 52 times forward earnings, which is really expensive considering that the industry average price-to-earnings ratio stands at 56. But if the company keeps hitting its targets -- and there's no reason why it can't given the way its business is growing -- investors willing to pay the premium could be rewarded handsomely.