Norwegian also revised its full-year 2018 outlook for adjusted earnings per share (EPS), setting the bottom of its new range of $4.70 to $4.80 exactly at the high end of its former guidance (between $4.55 and $4.70 per share). Below, let's review three key points from management's earnings conference call that provide context around the company's performance and its strong position heading into the back half of the year. 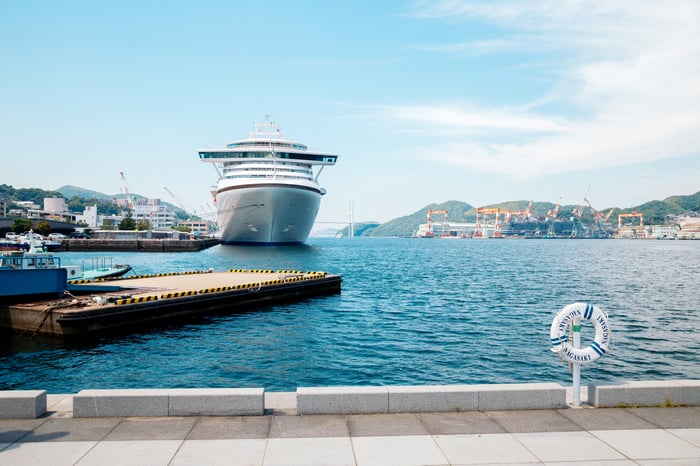 1. A new megaship powered results over the last three months

One reason for our more bullish outlook has been the stellar performance of Norwegian Bliss...Her performance to date has been nothing short of extraordinary. Particularly in terms of onboard revenue, where her yields are surpassing our highest expectations and breaking records sailing after sailing. Bliss' incredible reception from the cruising public is just the latest evidence of the extraordinary demand for cruise vacations that we have been experiencing since late 2016. -- CEO Frank Del Rio

At $5.4 billion in annual sales, Norwegian is the smallest of the big three cruise lines by revenue. Royal Caribbean and Carnival Corporation (CCL -3.31%) boast annual revenue of $8.8 billion and $17.5 billion, respectively. Norwegian has just 26 vessels in its fleet, yet a virtue of its relatively diminutive size is that occasionally, a single new ship can have an outsized impact on results. Launched in 2018, the Norwegian Bliss set a record for the best pre-booking performance for a new ship in the company's history.

The 4,000-passenger capacity Bliss, which cost $1 billion to build, aims to entice older travelers with premium amenities, while also drawing in millennials with contemporary (and fee-based) features like an outdoor laser tag arena and a two-story electric go-kart racetrack. Eleven out of 26 restaurants incur meal charges outside of all-inclusive packages, amplifying the vessel's ancillary revenue opportunities.

CFO Mark Kempa listed higher onboard revenue in the second quarter as one of the factors behind the company's raised expectations for the full year. While the additional spending is occurring fleetwide, it's most pronounced in the company's newest vessel.

2. Industry supply is rising, but Norwegian's fleet expansion is moderate

Given our consistently high load factors, coupled with our reliable year-over-year earnings growth and margin expansion (as evidenced by our 40 quarters of consecutive trailing 12-month adjusted EBITDA growth), we are very confident in our ability to drive demand and continue delivering by a wide margin, I should say, best-of-industry ticket yield, onboard yield, and EBITDA..." -- CEO Frank Del Rio

As CEO Arnold Donald of competitor Carnival Corporation attempted on his own second-quarter conference call, Norwegian CEO Frank Del Rio addressed analysts' concerns over the increasing supply in the cruise industry in the form of new ship builds and launches. Del Rio noted that while the industry's recent annual supply growth rate of 6% comprises a moderately fast pace, Norwegian's own current and projected expansion rates are slightly more modest. Current-year passenger supply growth of 4% will be followed by growth rates of 4%, 8%, and 0% in 2019, 2020, and 2021, respectively.

Norwegian's management argues that utilization metrics demonstrate that shareholders needn't worry over the company's rate of supply expansion. In the quote above, high load factors (berths sold on cruises divided by available supply), maximization of ticket pricing, and high on-board spends all illustrate that new supply is getting absorbed profitably into Norwegian's business model.

The cruise line also strategically optimizes its total capacity by shuffling ships between trending and cooling routes, something it can achieve perhaps more effectively than its larger peers. In July, Norwegian announced a redeployment plan that will see the Norwegian Joy redeploy from Shanghai to Seattle in 2019, and join the Bliss and Jewel to take advantage of the lucrative Alaska cruise market. The Norwegian Pearl will leave the Alaska cruise circuit upon the arrival of the Joy and head to Europe. A refurbished Norwegian Spirit will commence summer cruises in the Chinese market in 2020. These and other changes are expected to add $0.30 in incremental profit to the company's adjusted EPS in 2020.

3. Fuel costs are rising, but contained

Better-than-expected fuel efficiency from our new builds, along with consumptions savings from continued energy conservation efforts, led to a reduction in fuel consumption, offsetting the rising fuel prices and resulting in favorable overall fuel expense versus guidance. -- CFO Mark Kempa

During the second quarter, Norwegian's price of fuel per metric ton rose roughly 2.5% to $481. This figure includes amounts the company spent on fuel hedges. As I discussed in June, Carnival Corporation lowered its full-year outlook in its second quarter 2018 report due to currency and fuel price headwinds. Unlike Norwegian, Carnival doesn't hedge, under the philosophy that even oil industry veterans have trouble projecting the future direction of oil prices, and in a weak fuel market, hedges against upside risk end up adding to a cruise line's costs.

These are persuasive reasons for avoiding the purchase of protection against commodity price increases, but in the current environment, in which fuel prices are in a sustained uptrend, the advantage has flipped over to cruise operators like Norwegian that choose to implement hedging programs.

As CFO Kempa notes above, the company is also benefiting from more efficient consumption as it takes delivery of advanced vessels like the Bliss, as well as its own efforts to constrain fuel usage.

Thus, while Carnival lowered full-year guidance in part because of fuel costs, Norwegian raised its own 2018 outlook this quarter, despite the impact of fuel; the company expects its fuel cost per metric ton to rise to $505 next quarter. As a precaution, Norwegian has hedged 64% of fuel consumption through year-end, and it's already hedged one-half of 2019's projected consumption: Think of these as incremental costs that management feels entirely comfortable putting to risk.