Medicare remains one of the most popular federal programs, ranking only behind Social Security. But it's limited primarily to senior citizens right now. Sen. Bernie Sanders, I-Vt., wants to change that. Sanders is pushing for a plan that he calls "Medicare for All."

It would stand to reason that big pharma companies would oppose Sanders' plan. Many health insurers don't like the idea. If you happen to own pharma or health insurance stocks, you might not be fans of Medicare for All, either.

But another industry also isn't happy with Sen. Sanders' proposed program. Opposition from hospitals could present the biggest obstacle for Sanders and his allies. If you own stocks like HCA Healthcare (NYSE:HCA) and Tenet Healthcare (NYSE:THC), you'll probably hate Medicare for All, too. 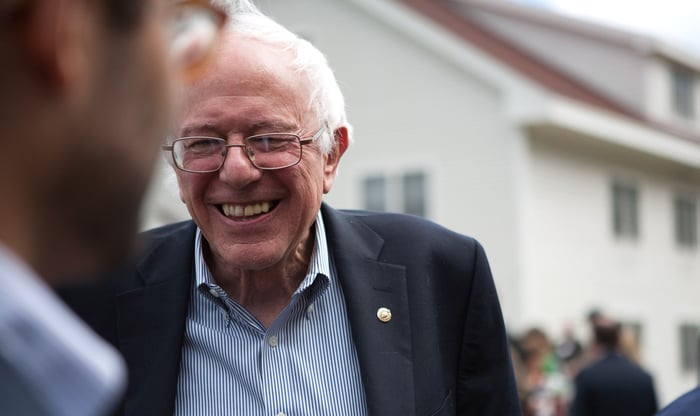 The name of Sen. Sanders' proposed program sums up what he'd like to do. His approach would be to expand Medicare to cover all Americans, regardless of age or income level. It would move the U.S. to a single-payer healthcare system similar to what many other countries have.

Medicare for All would cover pretty much all aspects of healthcare. Inpatient and outpatient care, including preventive care and emergency care, would be covered. So would vision, hearing, and dental healthcare. Prescription drugs, medical equipment, and medical supplies would all be paid for by the federal government. Even long-term care and hospice care would be included. Sanders envisions a cradle-to-grave, comprehensive program.

The U.S. currently spends around $3 trillion annually on healthcare. Sanders thinks that Medicare for All, if it's implemented, would lower overall healthcare spending by $6 trillion over the first 10 years.

Why hospitals hate the idea

On the surface, it might make seem logical that hospitals would favor Medicare for All. Dealing with a single payer would be simpler than interacting with multiple health insurers. Hospitals wouldn't have to write off bad debts from patients who didn't pay, since the federal government would foot the bill for everything.

However, there's a simple reason why the hospital industry opposes Sanders' plan. Medicare often only pays 70% or less of what a private health plan would pay. The financial impact on hospitals associated with transitioning to Medicare for All could be brutal.

For example, HCA Healthcare reported good Q2 results in July, with revenue of $11.5 billion and earnings of $820 million. Nearly 55% of that revenue came from private health plans. Let's assume that 30% of HCA's private-pay revenue wasn't there in the second quarter, under a hypothetical retroactive Medicare for All program: The company's revenue would be slashed by $1.9 billion. Since that's more than twice HCA's earnings, the hospital operator probably would have lost money rather than made a profit.

The scenario would be similar for Tenet Healthcare, which didn't enjoy such a great second quarter. Roughly half of Tenet's Q2 revenue came from managed care plans and individuals paying on their own. If that revenue was reduced by 30%, Tenet's revenue would have been close to $3.8 billion instead of $4.5 billion. And Tenet's net income of $24 million in Q2 would have almost certainly been wiped out entirely.

It's not surprising that Charles Kahn III, president of the Federation of American Hospitals (FAH), recently told the Washington Examiner that he's "disappointed any Democrats are going off on this tangent [Medicare for All]." Kahn added, "They should be focusing on the advances that were made under the Affordable Care Act."

The Federation of American Hospitals is an organization comprised of investor-owned hospitals, so its opposition isn't surprising. However, in 2016, both FAH and the larger hospital industry group, the American Hospital Association (AHA), opposed the public option -- a proposal to create a government-run health insurer that would compete against private insurers. Since Medicare for All goes much farther than the public option would, it's likely that the AHA, or at least many of its members, could view Sanders' plan in a negative light.

Don't go selling your hospital stocks in fear that their top and bottom lines are about to be in jeopardy. The chances for passage of Medicare for All appear to be very slim -- for now.

Trump administration officials have slammed the idea. Secretary of Health and Human Services Alex Azar recently stated that "Medicare is running out of other people's money, and those other people happen to be our children." He said that the administration's goal is to reduce the federal role in healthcare rather than expand it. Seema Verma, administrator of the Centers for Medicare and Medicaid Services (CMS), publicly stated that Medicare for All would be too costly and could "run the risk of depriving seniors of the coverage" that they currently have.

Should Republicans lose control of the U.S. Congress in the November elections, you can expect Medicare for All to become an even more visible topic of debate. It's also likely to be a lightning rod in the 2020 presidential election.

Hospitals are major employers, though, and are important members of their communities. If they actively oppose Medicare for All, even a change of the political party in control in Washington probably won't be enough to move to a universal healthcare system. But the uncertainty could mean that hospital stocks will be highly volatile over the next couple of years.