The S&P 500 (SNPINDEX:^GSPC) made news last Friday when it closed at an all-time high of 2,874.69. By doing so, the broad-based market benchmark set its first record since late January, beating its previous best by less than two points, or about 0.06%.

Yet the S&P 500 is just one measure of the stock market. There are dozens of other gauges of market performance, and the different benchmarks that they track include different stocks that share common characteristics like size, industry, or geography. When you look more closely at some of these other indexes, you can see that some parts of the market have pushed sharply higher throughout the past seven months, while others have gotten left behind. 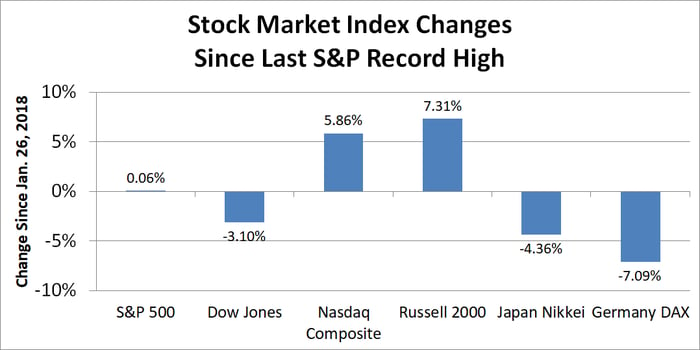 On one hand, the Nasdaq Composite (NASDAQINDEX:^IXIC) and the Russell 2000 (RUSSELLINDICES: ^RUT) have both seen extremely strong performance since January. For the Russell 2000, the smaller U.S. companies whose stocks are included in the benchmark give it less potential exposure to some of the geopolitical and macroeconomic issues that have dominated headlines, especially the ongoing trade disputes between U.S. and many of its major trading partners. Small companies tend to do more of their business domestically and rely less on foreign trade for their prosperity than larger companies. The Nasdaq has thrived as the technology stocks that make up a large part of that benchmark have led the way higher, with investors concluding that tech advances have to occur no matter what happens on the trade front.

On the other hand, the weak performance of the Dow Jones Industrial Average (DJINDICES:^DJI) as well as foreign markets like Japan and Germany more fully reflects the manufacturing-heavy multinational companies that make up substantial portions of those benchmarks. Many of their constituent companies will bear the brunt of ongoing trade tensions if they continue.

Many investors will celebrate the S&P 500's new high as a landmark event. But those who've focused on other parts of the stock market have already had plenty of reason to celebrate -- and they continue to do so.