In any corporate turnaround, there are tasks that are hard and those that are easy. Lowe's (NYSE:LOW) new CEO, Marvin Ellison, so far is checking off all the boxes in the latter column. It's time he started making the tough choices.

Following a C-suite shakeup that eliminated certain job titles while creating others that were directly reportable to him, Ellison is now closing all 99 Orchard Supply Hardware stores because they're not really adding anything to the business. That's fine, but in my opinion, what he's planning to do next is a big mistake. 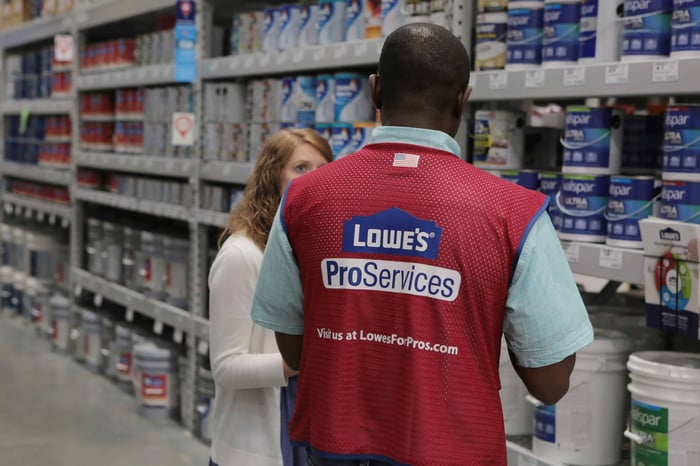 Primarily a California-based operation that had a local feel as it focused on paint, repair, and backyard products, Lowe's failed to do much with the chain it bought out of bankruptcy in 2013. Despite a booming California real estate market, Lowe's was also unable to use the brand to dent Home Depot's (NYSE:HD) lead in the state.

Orchard Supply was saddled with sizable debt by Sears Holdings during its 2012 spinoff and the chain was never able to gain traction. Last year it generated around $600 million in sales, but suffered operating losses of $65 million. Ellison told analysts on Lowe's second-quarter earnings conference call that "hindsight is 20-20" and it was largely a mistake that the company wouldn't make if it could do it all over again.

But as I see it, Ellison's just going to compound the error. In announcing the closure of Orchard Supply, the CEO said Lowe's would be simplifying the overall business, which meant canceling $500 million in scheduled capital investments because they weren't directed at the core business. Yet instead of channeling those resources to projects that could improve Lowe's footing, he will funnel the money to buy back company stock.

That's a short-sighted objective that might temporarily boost shareholder value, but does nothing to turn Lowe's around, improve its long-term outlook, or catch up to Home Depot.

A series of self-inflicted wounds

And Lowe's has some heavy lifting to do. Ellison admits Lowe's suffers from being out of stock on key merchandise, has trouble executing store resets efficiently, and experiences high levels of online order cancellations because its inventory systems don't function properly.

Sales at Lowe's rose 5.5% last year, and they're up another 5% so far in 2018, but it is expecting sales to only be up 4.5% for the year on a 3% rise in comparable-store sales. Home Depot sales were up 6.7% last year and has regularly posted even better same-store sales, while the co-op Ace Hardware registered 5% sales growth for last year and the first six months of 2018.

Home Depot has benefited from professional contractors who, although they only make up 3% of its customer base, spend $6,500 on average and account for 40% of its total revenue. Lowe's, which has typically favored the homeowner, and female consumers at that, has been trying to narrow the pro customer gap by making several acquisitions, including Central Wholesalers and Maintenance Supply Headquarters, two leading building maintenance, repair, and operations wholesalers.

Yet Home Depot still has excellent services that Lowe's needs to step up to match, including ship-to-site; buy online, pick up in store; and e-commerce. Home Depot continues to invest in its online operations, which are the fourth largest of all online retailers, generating some $6.7 billion in annual sales for its website. More importantly, Home Depot says 60% of its total sales, whether online or in-store, are influenced by its website.

The right answer for Lowe's

Figuring out how to provide these vital services requires hard decisions, and Ellison is going to have to make them if he wants to change Lowe's direction. Reshuffling executive offices and closing an underperforming chain won't be enough. Having extensive experience in store operations should also make Ellison's task of getting Lowe's inventory in order a natural outcome.

But diverting money to buy back stock when it already has $5.1 billion remaining on its current authorization is a mistake and not one of the difficult choices he needs to make if he's going to succeed in turning Lowe's around.