Call it a buzzkiller from BuzzFeed.

On Wednesday, online news site BuzzFeed reported that the Trump Administration is engaged in a "secret war on weed." BuzzFeed stated that the Marijuana Policy Coordination Committee told multiple federal agencies to submit "data demonstrating the most significant negative trends" about marijuana use. The goal appears to be to try to prevent further support for relaxing federal anti-marijuana laws.

If the committee is successful in its efforts, companies with U.S. marijuana operations such as Scotts Miracle-Gro (NYSE:SMG), CannaRoyalty (OTC:ORHOF), and Kush Bottles (OTC:KSHB) could see their hopes of operating in a fully legal environment dashed.

But don't go shorting these stocks. Here are three reasons why this plot to derail marijuana momentum will flop -- and do so bigly. 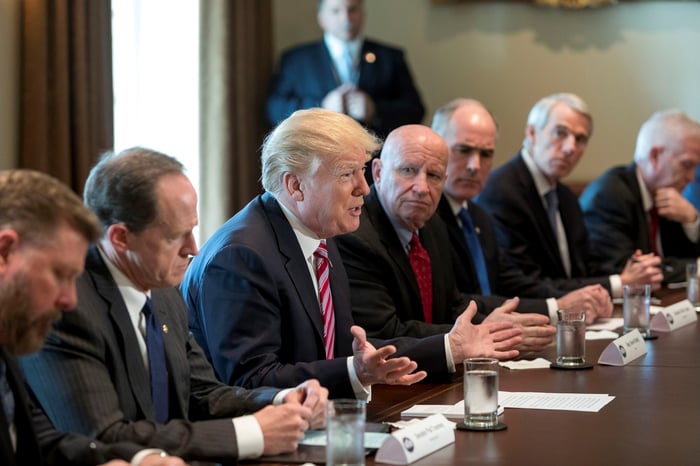 1. It's not coming from Trump

Love him or hate him, one thing pretty much everyone will agree on about President Trump is that he marches to his own beat. He stated in his presidential campaign that his top adviser was himself. So far, that statement appears to be pretty accurate.

The effort to cast marijuana in a negative light isn't coming from Trump. Instead, it's being coordinated by the Office of National Drug Control Policy (ONDCP). Jim Carroll is the head of the ONDCP, a position also known as the "drug czar." Carroll isn't a close confidante of the president. He wasn't even Trump's first pick for the position.

President Trump has publicly expressed his view that states should be allowed to make and enforce their own marijuana laws. In April, he pledged to support legislative efforts led by Sen. Cory Gardner (R-Colo.) that would prevent federal interference in states that have legalized marijuana (like Gardner's home state of Colorado). The Denver Post reported that Sen. Gardner's spokesman stated that the senator "remains confident in the commitment the president made to him to support a states' rights solution to the current disconnect on marijuana law."

2. It's a bad political move

Coming out swinging against efforts by states to legalize marijuana is a bad political move on multiple fronts. First, President Trump would be blatantly going against what he has publicly stated he supports. I know, what a shock it would be for a political figure to do a 180. But Trump would catch a lot of flak -- and he knows he would.

Speaking of flak, a major reason why the president came out in favor of relaxing federal marijuana laws earlier this year was that Sen. Gardner was holding up confirmations of political appointees. If Trump breaks his word, you can bet that Gardner will resume the logjam that worked pretty effectively in the past.

It's no secret that the American public has grown increasingly supportive of the legalization of marijuana. I doubt that a report from a group called the Marijuana Policy Coordination Committee based on data collected from more than a dozen federal agencies is going to sway public opinion. Quite honestly, the committee itself sounds like a creature from the swamp in D.C. that Trump has promised to drain.

3. The cat's out of the bag already

The nail in the coffin for the "secret" effort to derail the momentum for marijuana is that it's not a secret anymore. The cat's out of the bag already thanks to the reporting by BuzzFeed. And because it appears that the committee's report will be intentionally biased, I suspect that it will be largely discredited from day one.

More important, though, the cat's out of the bag already with respect to legalized marijuana in general. Thirty states plus the District of Columbia allow legalized medical marijuana. Nine states allow the legal use of recreational marijuana. More are likely to follow in their footsteps.

The U.S. Food and Drug Administration (FDA) even recently approved a marijuana-based drug for treating rare forms of epilepsy. That would make it hard for the committee's report to convincingly argue that there aren't medical benefits associated with marijuana.

I suspect the official report from the Marijuana Policy Coordination Committee will end up where lots of reports from federal committees and agencies go -- the trash can. Investors appear to be betting that's what will happen. Scotts Miracle-Gro stock moved higher the day after the BuzzFeed story went public. CannaRoyalty's share price was up, too, while Kush Bottles stock was basically flat. If investors thought the president would renege on his commitment to Sen. Gardner, these stocks would have fallen.

There's still a long way to go before federal marijuana laws are revised. But I don't think the odds of that happening are one smidgen lower now that the committee's anti-marijuana campaign has made the news. I continue to believe that it's only a matter of time before the federal government gets out of the way and allows states to make their own decisions with respect to marijuana.

Even if this view proves to be correct, though, it doesn't mean that all marijuana stocks are smart picks. Investors still need to do their homework before buying any marijuana stock. However, I think that the U.S. cannabis industry is here to stay. Companies like Scotts Miracle-Gro should be winners over the long run. The Marijuana Policy Coordination Committee won't be.