Please ensure Javascript is enabled for purposes of website accessibility
Free Article Join Over 1 Million Premium Members And Get More In-Depth Stock Guidance and Research
By Leo Sun - Sep 3, 2018 at 11:05AM

The purchase strengthens one of its most promising business segments.

Garmin ( GRMN -0.98% ) recently acquired Flight Plan -- which provides flight planning, scheduling, and trip support services through FltPlan.com and the FltPlan Go mobile app -- for an undisclosed sum. FltPlan has over 165,000 registered users across North and South America and is used to create 6.3 million flight plans per year.

Garmin will integrate FltPlan into its aviation unit, which provides navigation, flight control, hazard avoidance, and ADS-B (automatic dependent surveillance-broadcast) solutions for OEM, aftermarket, military, and government customers. Let's take a look at why Garmin wanted to beef up that business. 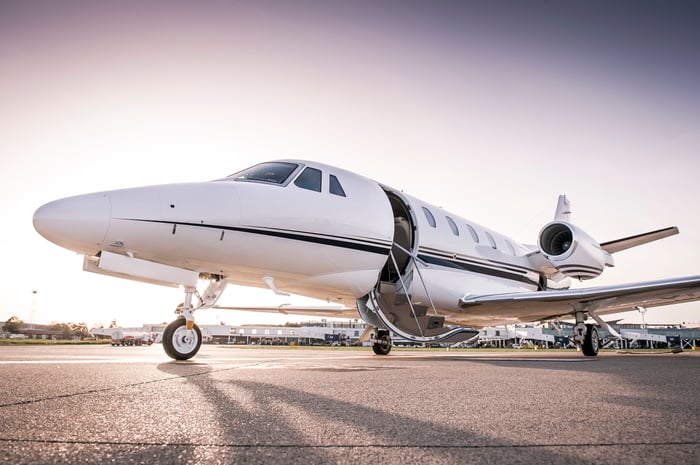 Garmin is often recognized for its automotive GPS devices, fitness trackers, and outdoor smartwatches. However, its automotive GPS business has struggled over the past few years due to the growing use of smartphones. Here's how Garmin's core businesses fared last quarter.

Garmin's total revenue rose 8% year over year to $894 million and beat estimates by nearly $60 million during the quarter, but the automotive unit remains a dead weight on its top-line growth. Garmin is expanding its higher-growth businesses to reduce the overall weight of the declining auto business.

In previous years, Garmin focused on expanding its fitness portfolio to profit from rising demand for fitness trackers. That enabled Garmin to capture 5% of the global wearables market during the first quarter of 2018, according to IDC, making it the fifth largest wearables maker after Apple, Xiaomi, Fitbit ( FIT ), and Huawei -- in that order.

However, the market for wearables (especially basic fitness trackers) has started to cool off due to market saturation and competition from higher-end smartwatches. That's why analysts expect Fitbit's revenue to slide 8% this year as its earnings stay in the red.

Garmin sidestepped that slowdown by selling more advanced wearables and cycling GPS devices, but its sales of basic fitness trackers continued to wane. That's why it's now focusing on other businesses for growth.

Last quarter, Garmin attributed the growth of its aviation unit to robust demand in the OEM and retrofit markets. It experienced "particularly strong" growth in sales of its ADS-B products, as well as newer products like its G5 indication system, TXi displays, and GFC autopilot products.

Garmin notes that demand for its ADS-B products was boosted by the FAA's Dec. 31, 2019, deadline for all aircraft to install ADS-B equipment to continue flying in Class A, B, or C airspace. During the conference call, CEO Clifton Pemble stated that based on the FAA's estimates, the ADS-B market was "just past the halfway point" of the cycle. Pemble also believes this growth opportunity could "continue past the deadline" because of limited capacities in maintenance shops.

Garmin also recently launched a new G3000H integrated flight deck for the Part 27 turbine helicopter market and was selected by Tactical Air Support to provide an integrated flight deck for its fleet of supersonic F-5 fighter aircraft. All of these catalysts -- along with the Flight Plan acquisition -- should help Garmin's aviation unit generate double-digit sales growth for the foreseeable future.

How profitable is the aviation business?

Garmin's aviation and outdoor units are its two most profitable segments. Here's the breakdown of the company's gross margin and operating margin by segment for the most recent quarter.

It's unclear how much revenue Flight Plan generates through its website and app. However, software and services usually generate higher-margin revenue than hardware, and bundling together software and hardware could lock in more aviation customers.

Investors often compare Garmin to Fitbit, but the former is a more successful and better-diversified company than the latter. That's why analysts expect Garmin's revenue and earnings to grow 7% and 12%, respectively, this year.

Looking ahead, Garmin will likely generate steady growth as it leans more heavily on the growth of its fitness, aviation, and marine businesses. It will also likely make more acquisitions, like Flight Plan, to widen those businesses' moats.