Chip giant Intel (NASDAQ:INTC) regularly returns a significant amount of cash to its stockholders through a combination of share repurchases and a quarterly cash dividend. In fact, the company said in its July earnings release that it "generated $13.7 billion in cash from operations, $6.3 billion of free cash flow, and returned $8.6 billion to shareholders (dividends of $2.8 billion and share repurchases of $5.8 billion)."

In other words, Intel gave back all of the free cash flow that it generated during the first half of 2018 -- and then some.

What has that meant for shareholders? A rising quarterly dividend, putting cash into shareholders' pockets, and a reduced share count (something that has helped to boost earnings per share): 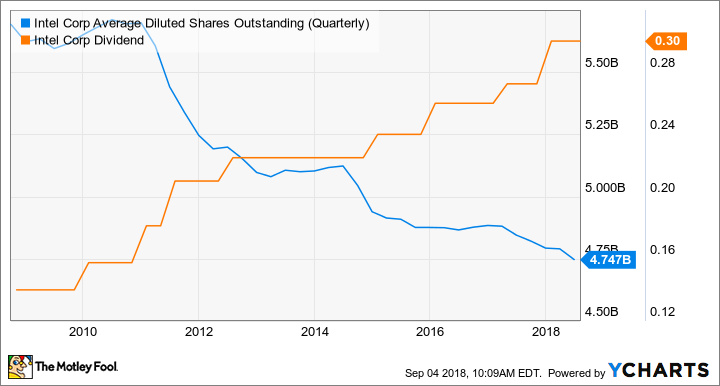 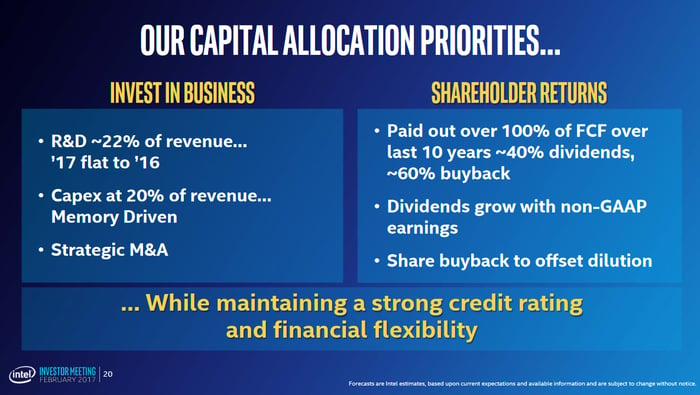 Swan summarized Intel's big-picture capital allocation strategy by saying, "Simply put, two things: invest in our business to strengthen our competitive position, and return value to our shareholders along the way."

When Swan talks about investing in the business, as the slide indicates, he's talking about the company's investments in research and development (which fuels the company's technology and product pipeline), capital expenditures (Intel manufactures logic and memory chips, which requires substantial spending on equipment), and "strategic [mergers and acquisitions]" (Intel has made several big acquisitions in recent years such as its $16.7 billion purchase of Altera and its $15.3 billion Mobileye buy.)

As for shareholder returns, here's what Swan had to say about the company's dividend strategy: "Our intentions are to grow our dividend in line with non-GAAP earnings growth. Our desires are to keep that around 40% of our free cash flows."

With that in mind, let's go over Intel's financial performance for the year thus far and what it could mean for both the dividend and the buyback.

Intel's original financial guidance for 2018 was for revenue of $65 billion (up 3.5% year over year) and non-GAAP EPS of $3.55 (up 2.6% year over year). However, Intel's business has performed better than the company had expected when it gave that initial guidance, so the company wound up boosting its financial guidance when it reported its first-quarter results and again when it reported its second-quarter results.

What's interesting is that there seems to be two potentially competing priorities that Intel will have to try to balance as it decides where to take the dividend next.

On one hand, Intel's aim to boost the dividend in lockstep with non-GAAP EPS could point to a significant dividend increase this year, since the company's current guidance calls for a big boost in non-GAAP EPS. A roughly 20% increase to the dividend (in line with the guidance Intel is giving for non-GAAP EPS) would suggest a dividend bump up to $1.44 a share annually, or around $0.36/share.

At the same time, though, Swan said on the company's most recent earnings call that the company expects to generate $15 billion in free cash flow during 2018. If we take 40% of that (Intel's target dividend as a percentage of free cash flow), we get $6 billion, or about $1.26 per share for the year.

It'll be interesting to see by how much Intel increases its dividend when the time comes.

Although Swan did say during the company's February 2017 investor meeting that buybacks would be used to "offset dilution from our comp-based program," the company's buyback program has been doing more than that as the diluted share count has come down noticeably since that time, suggesting that Intel has been more aggressive about the buyback than simply trying to keep the share count from going up. 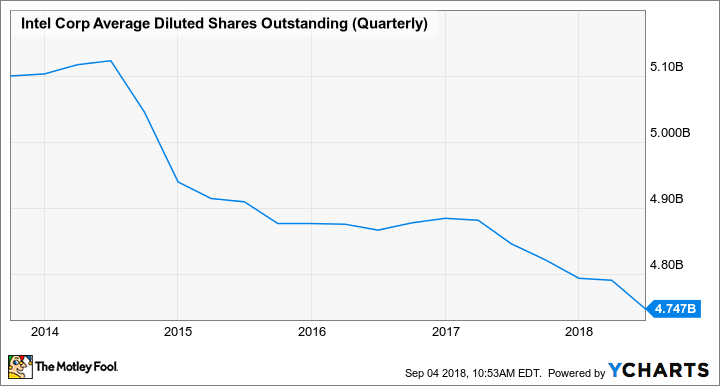 The company said in its most recent form 10-Q filing that the company can, under its current stock repurchase program, scoop up $7.2 billion worth of its shares. It wouldn't surprise me to see the company's board of directors authorize additional share repurchases in the coming quarters.