Investors had mixed feelings about second-quarter earnings, and a competitive threat looms on the horizon.

Shares of watch and accessory maker Fossil Group ( FOSL -2.95% ) fell 14% last month, in part due to its second-quarter earnings results. Investors initially sent shares higher following the report, only for the stock to close lower the next day.

Fossil continues to make progress navigating the transition to wearables, with its wearables business nearly doubling during the quarter. Watches revenue, the biggest business, declined 1% to $463 million during the quarter, but CEO Kosta Kartsotis noted on the earnings call that wearables continue to represent a growing proportion of sales. Wearables were 20% of total watch sales in Q2, up from 10% in the year-ago quarter. 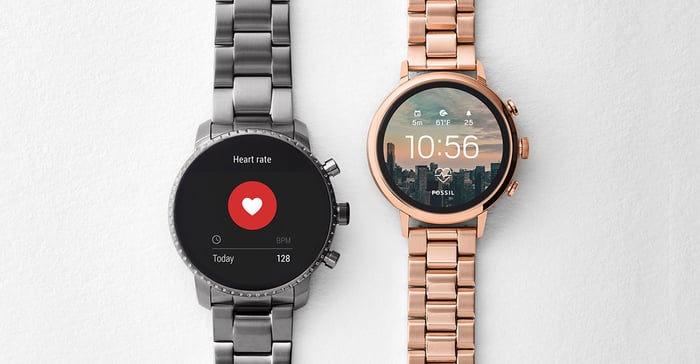 The company was able to significantly narrow its net loss, though, losing just $7.8 million, or $0.16 per share, during the quarter. That was a massive improvement compared to the $344.7 million, or $7.11 per share, in red ink a year prior.

Fossil shares have soared overall this year as the company pivots to wearables like smartwatches and fitness trackers in order to accommodate shifting consumer preferences. Fossil says that it will have over 250 smartwatch styles available for the holiday shopping season. It's also worth noting that Apple, which dominates the wearables market with Apple Watch, is expected to release a redesigned Apple Watch Series 4 later this month, which represents the most prominent competitive threat on the horizon.

The company's guidance for 2018 calls for net sales to fall by 6% to 10%, including the impacts of business exits. Gross margin for the year should be 51% to 52%, and operating expenses including restructuring charges should be $1.25 billion to $1.3 billion.

3 Stocks That Could Put NVIDIA's Returns to Shame

Can This Fashionable Underdog Challenge the Apple Watch?