Please ensure Javascript is enabled for purposes of website accessibility
Log In Help Join The Motley Fool
Free Article Join Over 1 Million Premium Members And Get More In-Depth Stock Guidance and Research
By Daniel B. Kline - Sep 5, 2018 at 5:43AM

Walmart, Amazon, and J.C. Penney are among the retailers making intense pushes to attract toy-buying customers, but this battle is about more than direct profits.

The death of Toys R Us has led to a land grab for the company's share of the highly competitive toy retail market. That's not an insignificant chunk of revenue, as the retailer held a high-teens percentage of the roughly $20 billion annual business.

Walmart (WMT 2.85%) has already said it plans to expand its offerings of toys for the holiday season by 30% in its stores and 40% online, CNBC reported. Also vying for shares of the spoils: J.C. Penney, which has added toy sections to all its stores, and Kohl's, which has expanded its toy offerings. In addition, Party City has plans to open 50 pop-up toy stores for the holiday season. And Amazon (AMZN -0.03%) has already become a serious player in the category.

Now, another major retailer has thrown its hat into the ring: Target (TGT -0.94%) says it will stock an expanded selection of toys this holiday season. 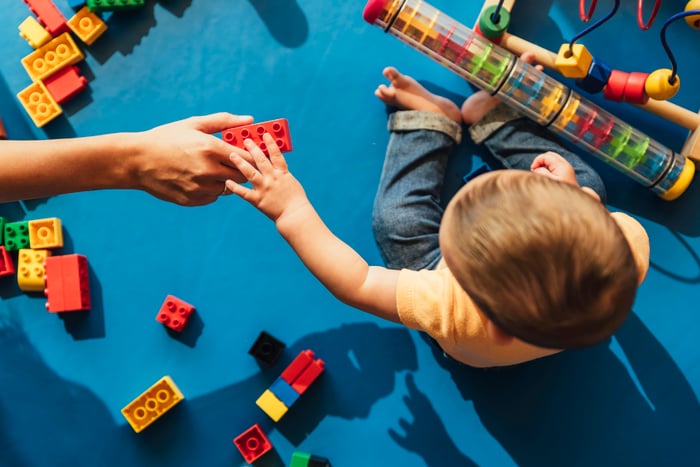 The retailer has always had a moderately good selection of toys both in its stores and on its website. With this expansion, the company intends not only to add to its selection, but to improve the digital experience for toy-seeking e-shoppers as well.

This will include showing off top toys categorized "key trends of the season," according to a press release. It will also offer an expanded digital version of its annual kids gift catalog.

"This holiday season, we're pulling out all the stops to make Target the ultimate destination for toys, and this curated list of top toys is just the beginning," said Chief Merchandising Officer Mark Tritton in a press release. "We're going bigger, offering guests thousands of toys, including more than 2,500 new and exclusive items – nearly double compared to last year – and creating even more engaging experiences in stores and online."

Is this a smart play?

The shuttering of Toys R Us has created an opening, and Target is better-positioned to take advantage than chains like fresh-entrant J.C. Penney, or Kohl's, which is expanding from a very limited selection. It's likely that Target, Walmart, and Amazon, will divvy up the largest portion of the now-defunct toy chain's market share.

The challenge -- and it's one that was a contributing factor in the collapse of Toys R Us -- is that heavy competition leads to low margins. That's a condition in the toy business that will only get worse with Walmart and Amazon doubling down on their attempts to grab market share.

In many ways, Target's latest maneuver can be seen as one designed simply to defend its turf.  By adding low-margin toy sales, it keeps traffic flowing to its stores and website. The retailer will likely claim its piece of the Toys R Us pie, and that will be a win even if it doesn't have a major direct impact on its bottom line.