Retailers are constantly trying to one-up the competition. Mobile ordering apps, free shipping to stores, and home delivery have all been broadly adopted as retailers have looked to gain an edge -- or at least keep pace with their rivals.

Walmart (WMT -0.28%) is expanding its nascent partnership with Handy -- a service that connects homeowners with professionals for in-home installation and assembly -- to online orders. Walmart aims to match similar services being offered by Amazon.com (AMZN -2.49%), Best Buy (BBY -2.92%), IKEA, and Target (TGT -0.47%). 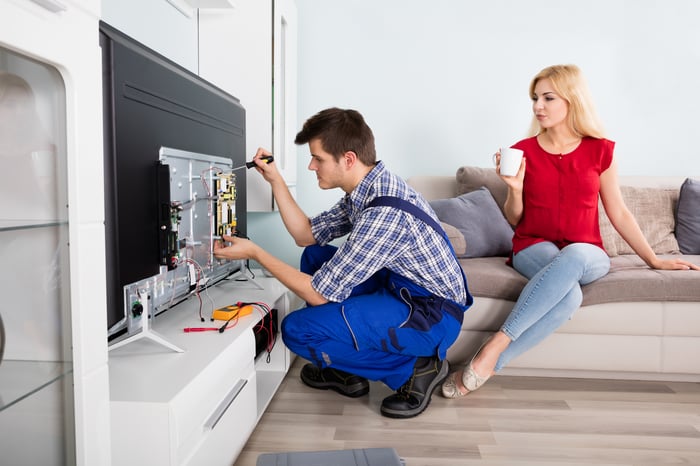 Do-it-for-me services are quickly becoming a prime point of differentiation for retailers, which have found that many customers don't have the time, skill, or inclination to take the do-it-yourself approach.

Best Buy's Geek Squad may be the biggest, best-known, and arguably most-successful do-it-for-me service. Geek Squad helps customers make sense of all the tech gadgetry they've purchased. Best Buy has credited Geek Squad with leading its turnaround and has begun offering subscription services to give customers 24/7 tech support for all their gear, regardless of whether it was purchased at Best Buy or not.

Yet there are more mundane needs for help, too. Anyone who has faced the daunting task of assembling a piece of IKEA furniture -- with its multitude of pieces and plastic bags full of parts -- understands that having someone complete the job for them is an option worth considering, even if assembly supposedly only requires a Phillips head screwdriver. The time invested in the endeavor is an expense, too.

A year ago, IKEA acquired TaskRabbit, an odd-jobs start-up that matches local handymen with customers who need services performed around the home. Customers can buy a piece of IKEA furniture today and have it assembled the next day by a "Tasker" for as little as $36.

Others have begun offering such services as well. Target bought supply chain and logistics specialist Grand Junction because it will allow Target to begin offering other services like assembly and installation. Even Amazon began offering its own in-home tech support service last year.

Home is where the handyman is

The concept of bundling services with merchandise purchases is not new. For example, home improvement centers like Home Depot allow you to buy doors, windows, flooring, and appliances, and one of their affiliated contractors will install them. Use of these services by broadline retailers, however, is more recent. Walmart is the latest retailer to jump on this trend.

In March, it added Handy's services to 2,000 stores across the country as the home category becomes an increasingly competitive space.

In 2017, Walmart.com doubled the number of home assortment items it carried, adding a wide selection of furniture and decor. J.C. Penney is also counting on the home department to help turn its fortunes around. Home accounted for 15% of sales last year, up from 13% in 2016, thanks to double-digit sales growth in that category. Furthermore, Target recently launched its Project 62 furniture line and Amazon has introduced several private label furniture lines, like Rivet.

Wayfair, which also has a partnership with Handy, has proven that consumers are increasingly comfortable buying big-ticket items online. However, that means consumers now expect the same amenities for their online purchases as they could find at a brick-and-mortar store.

By extending Handy to its e-commerce site, Walmart is creating a one-stop shop for online customers, who will no longer have to arrange services on their own. It also builds on an existing assembly and installation service Walmart has for online customers with Porch.com.

Because consumers more often than not begin their online shopping journeys at Amazon.com, Walmart needs to raise its profile online. Competing on something other than price can help ensure that the competition doesn't gain the upper hand.