Shares of Apple (NASDAQ:AAPL) surged in August after the company delivered a strong third-quarter earnings report at the end of July. The iPhone maker reported revenue growth of 17% year over year, which is the strongest growth rate in 11 quarters. On top of that, earnings per share exploded 40% year over year, which got a boost from share repurchases and a lower tax rate as a result of the 2017 Tax Act.

Apple shares finished the month up 19.6%, according to data provided by S&P Global Market Intelligence. 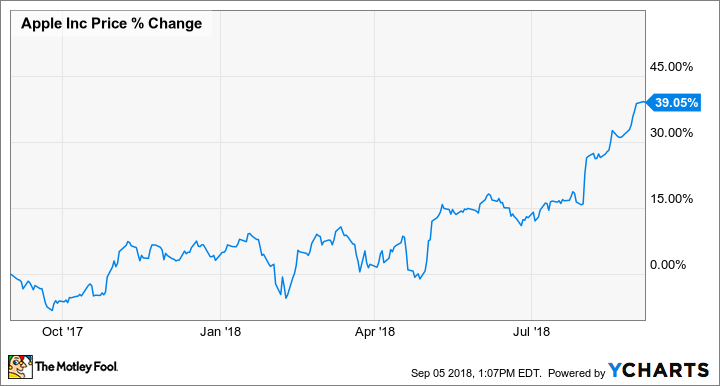 When Apple launched its new flagship iPhone X at an astoundingly high price of $999 last fall, many people feared consumers wouldn't pay up. There has also been an ongoing concern about what impact a peaking smartphone market may have on Apple's revenue growth over time, especially because iPhone sales made up 62% of trailing-12-month revenue.

For now, those concerns have been put to rest. The second-quarter earnings report showed continued strong sales of iPhone X, which caused a 19.5% year-over-year increase in average selling prices. This drove a 20% year-over-year spike in iPhone revenue, despite only a 1% increase in units sold across all iPhone models.

All in all, the increase in selling prices has investors hopeful that management will be able to cleverly find ways to keep customers upgrading to higher priced phones, and thereby keep revenue growing, even with flatlining unit sales. 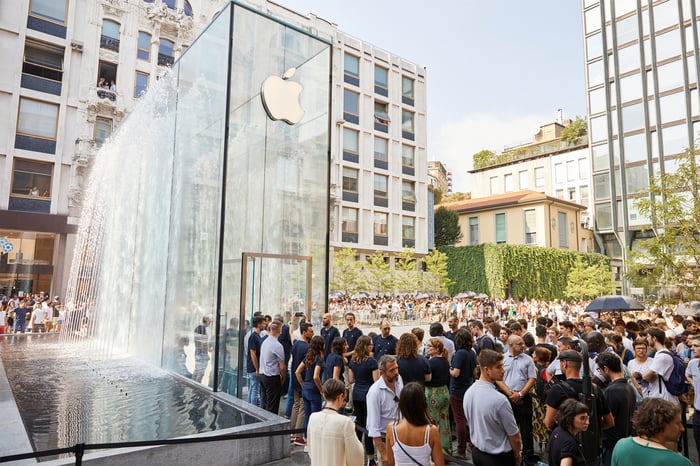 Additionally, Apple continued to see robust growth out of the services category, which includes Apple Pay and third-party subscriptions through Apple TV. Services grew 31% year over year and made up 17.9% of total revenue in the quarter.

Sales of wearables and accessories, including Apple Watch and the HomePod smart speaker launched earlier this year, grew 37% year over year to $3.74 billion. The robust growth in services and other products is very encouraging to see as it reflects Apple device owners tightening their attachment to the Apple ecosystem.

Apple is expected to announce a new round of updates to its iPhone line at an event on Sept. 12. Rumor has it that Apple will introduce a plus-size version of the iPhone X. Assuming that happens, if it launches at a higher price than the $999 last year's version sold for, Apple's increasing average-selling-price story may not be over yet, which would have positive implications for Apple's revenue growth.

Overall, Apple's ability to persuade customers to trade up to higher priced phones is a testament to the appeal of its services and software. This has investors feeling much more optimistic about Apple's long-term potential to keep growing its top line even as global sales of smartphones begin to plateau.