Please ensure Javascript is enabled for purposes of website accessibility
Free Article Join Over 1 Million Premium Members And Get More In-Depth Stock Guidance and Research
By Jeremy Bowman - Sep 6, 2018 at 11:07AM

Shares of the airport-based retailer gained on strong profit growth in its earnings report.

Shares of Hudson Ltd. ( HUD ) were climbing higher in August after the travel retail specialist posted a solid second-quarter earnings report, and investor optimism built for the recent IPO.

According to data from S&P Global Market Intelligence, Hudson finished the month up 22%.

As you can see from the chart below, the stock jumped early in August on the earnings report and then gained toward the end of the month for reasons that were unclear. 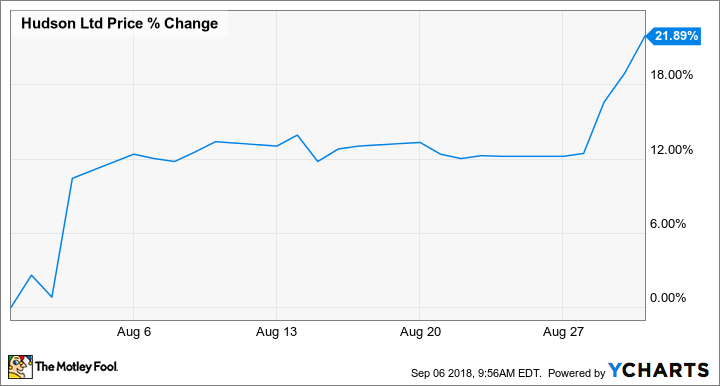 Shares of Hudson, which operates retail stores and newsstands inside airports, train stations, and bus stations, jumped 9% on Aug. 3 when the company delivered upbeat results as its strategy to pivot to higher-margin products like grab-and-go foods paid off.

Overall revenue increased 7.4% to $499.4 million, essentially meeting estimates of $499.8 million. Organic sales, which strips out the effect of acquisitions and divestitures, were up 8.2%,  and comparable sales, a key retail metric, rose 4.5%, showing that individual stores are becoming more productive.

Gross margin increased from 62.2% to 63.9% due in part to the new grab-and-go offerings, and a reduction in franchise fees lowered general and administrative costs by 23%. As a result, adjusted earnings per share more than doubled to $0.28, beating estimates at $0.23.

CEO Joe DiDomizio said, "The execution of our productivity initiatives, including expanding our grab & go food offerings, and our strategic wins this quarter, most notably at Boston Logan Airport, are all key to the sustainability of our organic growth profile," and noted the ample whitespace opportunities for expansion in the nation's top airports.

Toward the end of the month, the stock gained again, and it has continued to rise in the beginning of September, though there was little news driving those gains.

Hudson didn't provide specific guidance for the quarter or the full year, but management touted the long-term opportunity on the earnings call to open in additional airport terminals and further expand into food and beverage, as the company now occupies less than 20% of total retail and restaurant square footage in most major airports.

With the strong economy and relatively low airline ticket prices, Hudson seems poised for more steady growth. After jumping on two straight earnings reports, Hudson stock could be emerging as an under-the-radar winner.