Many income investors focus solely on the dividends that stocks pay their shareholders. But the best investments are ones that not only pay you the income you need, but also deliver the long-term gains you want.

The past year has been a good one for stocks, but only the best dividend stocks have been able to deliver gains of 50% or more while still sporting at least a 4% yield. Still, a handful of stocks have made the cut. Below, we'll look more closely at Mesabi Trust (NYSE:MSB), Macy's (NYSE:M), and Seagate Technology (NASDAQ:STX) to see how they accomplished this impressive feat and whether they still have further gains in store for new investors.

An iron grip on the metals industry

Mesabi Trust has benefited greatly from the rise in interest in iron ore over the past year, posting gains of almost 80% since September 2017. Mesabi is a special type of investment known as a royalty trust, which entitles shareholders to receive distributions of income on a regular basis. The trust has historically been quite generous with its payouts, and its current yield of 9% looks quite attractive among dividend stocks right now.

The thing to understand about Mesabi, though, is that as a trust, it has a finite life span. That means that to some extent, dividend distributions also have to offset the fact that the remaining value of the assets that the trust holds get depleted when its business operations remove iron ore from its mines. Nevertheless, in the short run, demand for iron ore and resulting changes in prices for the commodity can have dramatic impacts on what Mesabi brings in and then pays out to shareholders. If the metals markets remain strong, then further gains for Mesabi are quite possible. 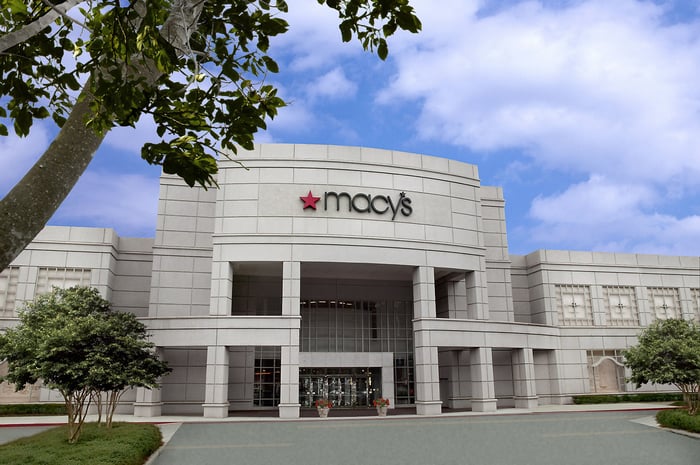 Macy's is a household name for most Americans, with its famous Thanksgiving Day parade helping to promote its traditional big-box retail department stores. The company hasn't been immune to the challenges facing brick-and-mortar retailers over the past several years, but lately, Macy's has been exemplary in its ability to turn around its operations and get moving in the right direction again.

Even after an impressive run-up of 67% in its stock price over the past year, Macy's still features a dividend yield of 4.2%. Its smart strategic decision to turn to its Backstage off-price store chain is in keeping with the trend of the retail industry toward discount stores, and other acquisitions like the Story concept store and the Bluemercury line of beauty products also look like they'll contribute to future growth. As we enter the critical holiday season, Macy's has a lot of momentum that could keep it moving higher even as it keeps rewarding its shareholders with ample dividends.

Finally, Seagate Technology has been a favorite among dividend investors for a long time. The hard-disk drive and data storage specialist has sustained a 4.7% yield even as its shares have soared by 55% since September 2017.

Seagate's gains have come as a result of a couple of favorable factors. First, demand for traditional hard-disk drives has been quite strong, as enterprise customers look for cost-effective solutions to gather, keep, and analyze the data they collect in their efforts to keep up with the pace of technological innovation throughout the economy. At the same time, prices for the flash memory that goes into higher-end solid-state drives have also been cyclically strong, supporting good revenue and profit growth.

The challenge, though, is that an increasing number of those following Seagate see these favorable cyclical trends reversing course in the near future. As competitors add more production capacity to meet demand, downturns in the industry's business cycle have historically led to poorer conditions that hurt players throughout the space. Given Seagate's potential loss of hard-disk-drive business if alternatives become cheaper, some believe that the declines the stock has suffered in just the past week could be the beginning of a new downtrend for the company.

Be smart with your dividends

A stock that pays high yields and delivers great performance is a great find, but past performance doesn't guarantee continued success. Macy's looks like it's still on track to deliver further gains, but Mesabi and Seagate will both need help if they expect to duplicate their huge gains over the past year.