When Apple (NASDAQ:AAPL) introduced the iPhone X last year, it was positioned as an ultra-premium product, with a price tag to match. The entry-level version had a list price of $999 -- $30 more than the most expensive product in Apple's prior-generation lineup -- and the variant with a larger 256GB storage configuration went for a whopping $1,149.

Even at high price points, customers bought the iPhone X in droves. In fact, on Apple's July 31 earnings conference call, CEO Tim Cook told investors that the iPhone X "has been the top-selling iPhone since the launch, and so we feel terrific about iPhone X." 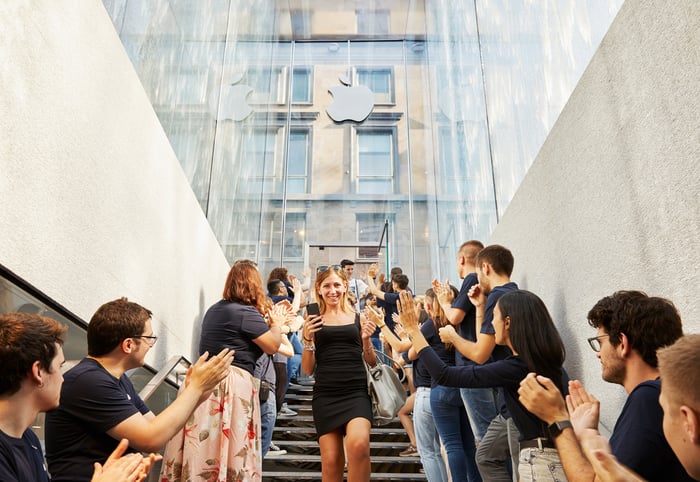 There's certainly some debate about how Apple will price its upcoming trio of new iPhones and, in particular, the successor to the iPhone X (which is reportedly going to be called the iPhone XS). Per one report, the iPhone XS could start at $799 -- a full $200 cheaper than its predecessor cost at launch.

Allow me to explain why such pricing makes sense, even in light of Apple's apparent strategy to drive iPhone revenue growth through average selling price increases.

Three capacities instead of two

The lower entry price for the 64GB version could help drive unit shipments up, while less price-sensitive customers opting for the versions with 256GB and 512GB of storage could help keep the average selling price of the iPhone XS product in good shape.

Push it to the Max

It's also worth noting that while the iPhone X was Apple's highest-end iPhone in the lineup that was announced in September 2017, the iPhone XS won't be the highest-end product in the soon-to-be-announced lineup. That honor is expected to go to the larger variant of the iPhone XS, which 9to5Mac says is probably going to be called the "iPhone Xs Max." (As an aside, 9to5Mac's original reporting said that the iPhone X's successor would be called the "iPhone XS" but its more recent reporting says that the larger variant will be the "iPhone Xs Max," so it's unclear whether the "s" will ultimately be capitalized in the branding of these products.)

Apple has historically charged a premium for the larger versions of its devices -- something that's understandable because they also tend to cost more to manufacture -- and I'd expect that practice to continue with this year's lineup.

If the iPhone Xs Max starts at, say, $999 for the version with 64GB of storage and the variants with 256GB and 512GB of storage go for $1,149 and $1,299, respectively, then sales of those products could serve to help Apple's iPhone average selling price story. Given the rising popularity of Apple's "Plus" line of smartphones, I'd expect iPhone Xs Max sales to be robust.

Ultimately, figuring out how to properly price products isn't a trivial task. Apple has to consider many factors, including (but certainly not limited to) product manufacturing costs, how demand for its products is affected by pricing, and the kind of product mix that it will ultimately ship (e.g., iPhone XS vs iPhone Xs Max, what storage configurations customers will choose, and so on).

Nevertheless, Apple's upcoming iPhone product line looks even stronger than what it launched last year. If the company plays its cards right (something that it clearly did with the lineup that launched in 2017), the new products could ultimately deliver another nice boost in sales and profit for the company's highly-important iPhone business.