Improving sales trends and low valuations could make this a great time to consider the parent companies of Outback Steakhouse and Chili's.

The restaurant industry has had a rough few years. Bloomin' Brands (BLMN -1.96%), owner of Outback Steakhouse, and Brinker International (EAT -1.57%), owner of Chili's Grill and Bar, were hit particularly hard by traffic trends. Some of this can be attributed to shifts in consumer behavior, as diners more than ever are demanding faster service and quality food preparation.

But these two companies weren't idle over the last few years. Management teams at Bloomin' Brands and Brinker have been investing to improve the overall dining experience, and those investments are starting to pay off.

Bloomin' and Brinker have seen noticeable improvement in comparable-store sales recently. The kicker is that their valuations look cheap, which means investors might want to consider these forgotten stocks before additional positive news sends their prices higher. 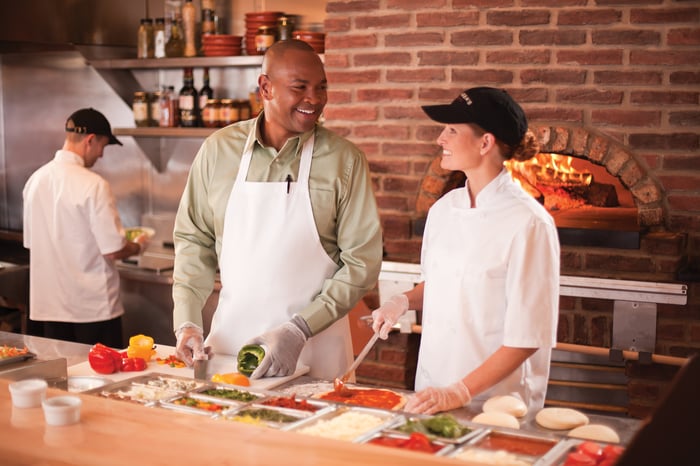 Bloomin' Brands is the parent of Outback Steakhouse, Carrabba's Italian Grill, Bonefish Grill, and Fleming's Prime Steakhouse and Wine Bar. It has 1,490 restaurants across 48 states and 21 countries. Outback, the largest chain, generated 51% of total sales on a trailing 12-month basis through March 2018.

After a few years in which declining traffic across the industry hurt Bloomin' Brands' comparable sales, Outback began to turn upward in 2017, with the company's other restaurants following suit, reflecting several improvements the company made to drive traffic.

Most notably, Outback went through a complete makeover, remodeling restaurants and relocating some of them. Management also shifted its spending away from discounting toward brand building, such as investing to enhance the overall dining experience with better food and portion sizing, all of which seems to be paying off.

Outback has been performing well over the last year, with five consecutive quarters of positive comps. In the second quarter, companywide U.S. comps were up 2.8%, while Outback's comps were up 4%.

Going forward, management sees a growth opportunity in offering delivery, as well as combining Outback and Carrabba's into express outlets that offer catering, delivery, and takeout. Management is also targeting international growth (it now has 255 locations in 21 countries).

The stock has been roughly flat over the last five years, yet adjusted earnings per share grew 48% through share repurchases. At a forward earnings multiple of 13 times next year's earnings estimates and a current dividend yield of 1.9%, Bloomin' Brands stock could begin climbing from here if the company continues to show growth in comps. 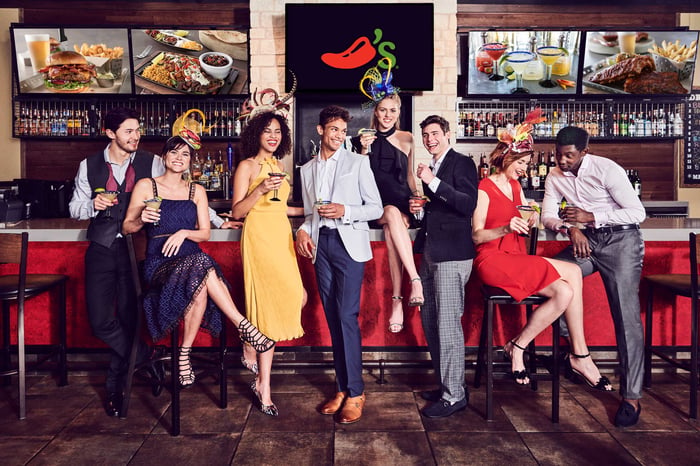 Brinker is one of the world's largest casual dining operators. It owns Chili's Grill and Bar, and Maggiano's Little Italy. The company has more than 1,600 restaurants across 32 countries, with Chili's generating over 80% of the annual revenue.

As with Bloomin' Brands, the restaurant recession over the last few years caused a string of comparable-store sales declines. The stock is up only 17% over the last five years, with share repurchases helping to keep earnings up on a non-GAAP basis.

But the last few quarters have shown positive traffic trends. In the company's recent quarter, comps companywide increased by 0.6%, as Chili's reported its best quarter in more than three years. Management attributed the improvement to reducing the menu by 40%, which allowed faster delivery of food -- something that's become very important to restaurant diners. Management has also worked on quality and value.

The My Chili's Rewards loyalty program grew about 20% in fiscal 2018 (which ended in June), giving management an opportunity to directly market to these customers to drive incremental traffic in the short term.

Also in the near term, management plans to invest in technology, particularly its mobile app and other digital areas to make employees' jobs easier, improving efficiency and speeding up delivery.

Longer term, Brinker is looking at international expansion by working on new franchise agreements in Asia, where it's expected to open 30-plus restaurants in fiscal 2019.

Compared with McDonald's, Brinker's forward P/E of just 11.5 times earnings estimates looks very appealing. Analysts expect Brinker to grow earnings 7.8% per year over the next five years, while McDonald's is expected to grow 8.6% annually. Yet McDonald's trades at a far more expensive forward P/E of 20.

With comps starting to turn positive and the broader economy looking strong, now might be the time to consider adding shares of Bloomin' Brands or Brinker -- or both -- before the market wakes up.