Limited in-store presence and a crowd of meal kits challenge the company.

Americans are eating about 80% of their meals at home, up from 75% 10 years ago, according to global information company The NPD Group. More eating is happening on the home front and how people prepare meals is also changing. Shortcuts, like buying the already cooked rotisserie chicken or the premade side of potatoes from the deli and adding a homemade fresh tossed salad are creating blended, time-saving meals.

Blue Apron's (APRN 2.94%) meal kits, with pre-measured ingredients and step-by-step recipes, should be a go-to solution for people not crazy about from-scratch cooking but interested in convenient, healthy meals. But despite offering kits that line up with consumers' needs, Blue Apron is struggling to connect with people who now have many more meal-prep options. Year-to-date, the company's stock is down 53% and Q2 revenue decreased 25% year over year as the customer count dropped 24%. 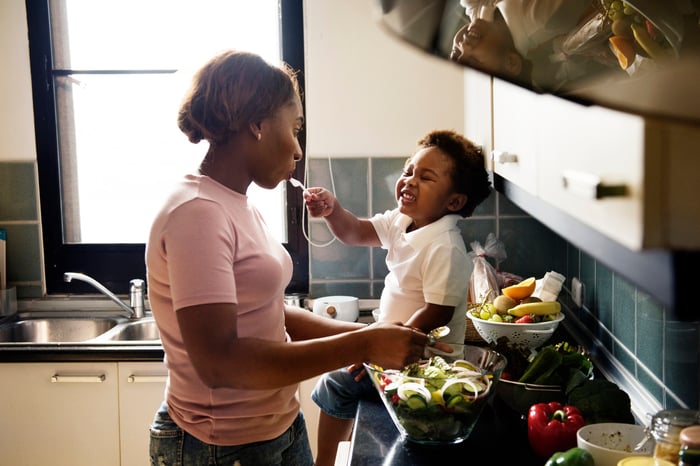 When it comes to buying for in-home eating, most Americans still head to the grocery store to choose ingredients or prepared foods.

Online grocery sales aren't big, currently estimated to be less than 5% of the $683 billion the Food Marketing Institute says people spent on groceries in 2017. Meal kit subscription revenues are small, too, estimated to be between $2 billion and $4.6 billion, less than 1% of grocery dollars. Although the popularity of online shopping and meal kits is growing, consumer habits are slow to change. The Food Marketing Institute predicts about 80% of food sales in 2025 will still come from Americans who prefer trekking through the grocery store aisles.

Blue Apron has worked to become part of the grocery shopping trip, offering two meal kits in roughly 80 Costco stores across the U.S. The four-serving meals rotate monthly and retail for $24.99, about 30% cheaper than the subscription price. The program that started in May has gone well, according to CEO Brad Dickerson, who commented during the August earnings call that, "The past three months have further validated to us the power of Costco's retail platform." The company plans to continue expanding within Costco and is exploring options to get into more brick-and-mortar stores.

Although Blue Apron has had early success in Costco, its program is small compared to competitors. Other meal kits are now available in hundreds of grocery stores with more varieties than Blue Apron offers.

Some grocery stores offer their own lines of meal kits. Southeastern grocer Publix offers six kits, from heat-and-eat to simple prep and rotates the menu every week across its 1,200 stores.

Most of Blue Apron's competition sells two-serving meals priced between $15 and $20 per kit or $7.50-$10 per serving. Blue Apron's $6.25-per-serving price for the meals sold in Costco is a better value, but the company faces pressure from meal kit newcomers Walmart and Target.

Getting same-day delivery off the ground

Blue Apron is trying new ways to reach customers. Recognizing that about 80% of Americans decide what to fix for dinner only a few hours ahead of time, Blue Apron is getting ready to test same-day delivery. This service may allow Blue Apron to get consumers meals when they want them and offer more variety (its current weekly subscription menu features eight kits).

Importantly, delivering to doorsteps could provide the company with a competitive edge. Same-day delivery could serve last-minute shoppers who don't want to stop at a grocery store on their way home from work.

A Blue Apron on-demand program with in-store and same-day delivery options should be able to meet shoppers on their turf. But grocery stores and meal kit competitors continue to surge forward with lots of meal choices. With its meal kits in less than 100 stores and the same-day delivery test in the planning stages, the company is having a tough time becoming top-of-mind and first choice with consumers. But there's opportunity for it to hit the gas and gain a bigger share of home-cooking sales.