That lucrative used-games business, long GameStop's cash cow, has been faltering for much of the past few years. Sales have been slumping since the first quarter of 2016, and gross profit has been shrinking for even longer. What's worse, the decline has accelerated in 2018, reflecting the ongoing shift away from physical game discs.

GameStop makes a killing from used games, thanks to a wide spread between what it's willing to pay for a used game and what it can later resell it for. Here's an example: The current trade-in value at GameStop for the PlayStation 4 version of Grand Theft Auto V is $7.20, or $9.00 in store credit, according to the company's website. GameStop sells used copies of that popular game for $27.99 on its website, just $2 less than the new version and nearly four times the cash trade-in value. That's one heck of a markup.

In a world where there was no option other than to buy physical game discs for the major game consoles, this model worked like a charm. Gamers could get at least something for their old games, and they could save a few bucks on their next game by buying used. But digital games, bought and downloaded directly through the game console's online store, are slowly replacing physical discs. And there's no such thing as a used digital game.

Against the backdrop of this digital shift, it shouldn't be all that surprising that GameStop's used-games business is in decline. But that decline has picked up steam in the first half of the year: 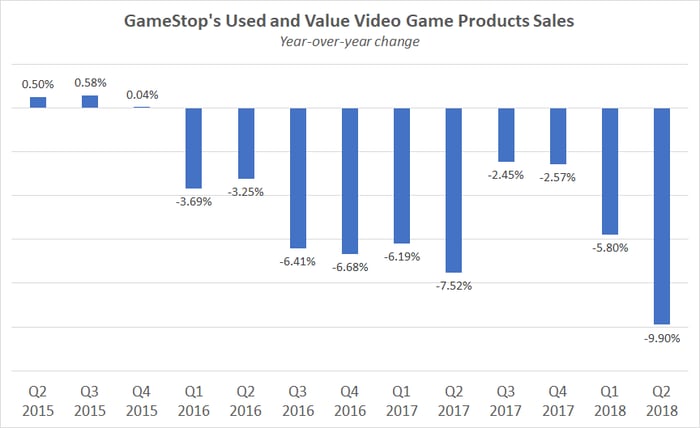 The second quarter of this year marked the worst year-over-year decline in sales of used and value games for GameStop since this slump started. And the gross profit picture is even worse: 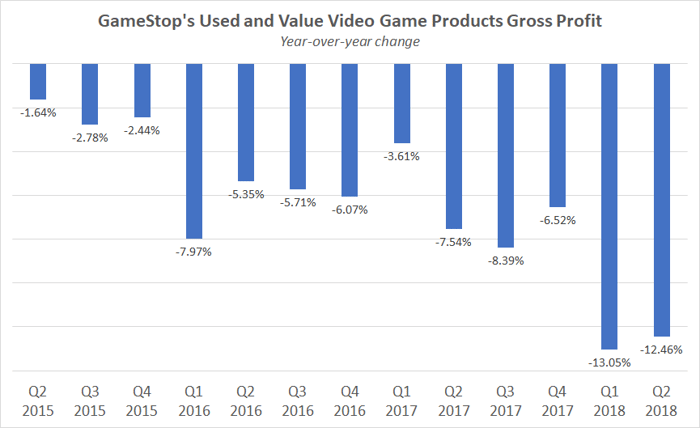 In 2017, used and value products accounted for about one-third of GameStop's gross profit. Other areas picked up the slack in terms of sales, but GameStop's overall gross margin contracted by two percentage points thanks to slumping used-games sales.

Not a turnaround play

The used-games business is in an accelerating decline. The company's diversification into selling technology products led to a massive write-off last year and a rethinking of that strategy. Profits are falling, and the pace of that decline could hasten as gamers increasingly opt for digital copies of their favorite games. I don't see much hope for a turnaround here.

GameStop is actively exploring strategic options, and a buyout remains the best hope for investors. The alternative is to watch GameStop's core business wither away.