Please ensure Javascript is enabled for purposes of website accessibility
Free Article Join Over 1 Million Premium Members And Get More In-Depth Stock Guidance and Research
By Rick Munarriz - Sep 11, 2018 at 9:14AM

The pioneer of wireless high-end multiroom speakers sees sales decline in its first quarter as a public company, but it's not the end of the world.

Investors were bracing for a rough quarter out of Sonos ( SONO -0.66% ) shortly after Monday's market close, and that's exactly what they got. Shares of the high-end speakers specialist initially moved sharply lower after posting its first financial report as a public company, though to be fair the stock had also soared 13% on Monday just ahead of the announcement.

Revenue declined 6.6% to hit $208.4 million in the fiscal third quarter. It's not a good look on the top line, but it's actually better than what Wall Street and Sonos itself were expecting. Comparisons were going to be rough, pitted against last year's release of PLAYBASE -- Sonos' first home theater sound base -- during the third quarter. In last month's prospectus, Sonos was warning that revenue would fall to between $206.4 million and $208.4 million, so it landed at the very top of that range. 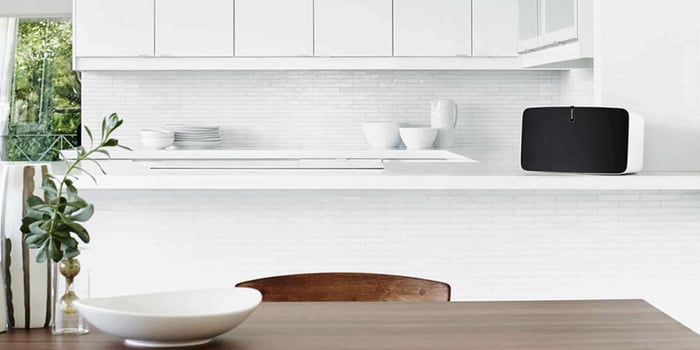 The sound of sirens

Sonos is pointing out that it sold more products than it did a year earlier, up 11% to 886,514 units. Once again, we have rough comparisons. The $699 PLAYBASE last year pushed average selling prices higher, while its rollout of the $199 entry-level Sonos One wireless speaker is stretching the average price tag in the other direction this time around.

A silver lining in the product mix shift is that it does expand Sonos' installed base of customers. Unfortunately, Sonos One is a lower-margin product, driving total margins lower for the period. Sonos' quarterly deficit widened to $0.45 a share. Wall Street pros were modeling a much smaller loss.

In the big picture, wireless speakers -- leading the way at 45% of product sales -- saw its sales rise 16%, held back by a modest 6% uptick in home theater speakers and an outright decline in component sales.

Sonos isn't standing still. It launched in Japan after the end of the fiscal third quarter, and it continues to crank out new hardware. Sonos is also sticking to its long-term goals calling for 10% in revenue growth and 20% improvement in adjusted EBITDA. It naturally fell well short on both fronts this time around, but this is also why Sonos is reinforcing the notion that its quarterly lumpy results should be viewed in annual installments.

There's been a lot of volatility in the stock since Sonos went public at $15 just last month. It continues to trade above its early August starting line.

These are challenging times, as tech giants flooding the market with reasonably priced voice-activated smart speakers will weigh on the low end of the market. Sonos is issuing guidance for the entire fiscal year ending later this month. It sees $1.109 billion to $1.114 billion in revenue for all of fiscal 2018, 12% above fiscal 2017. It sees adjusted EBITDA growing slower -- up 6% to 11% -- flipping the script of its long-term goal where EBITDA grows twice as fast as its top line. If we whittle away the first three quarters of both fiscal years, we see Sonos eyeing 14% to 16% growth in the fiscal fourth quarter, in line with analyst expectations and accelerating from the 11% pace it was on through the first nine fiscal months of the year. Adjusted EBITDA will also return to growth.

Wall Street's initial response to Monday afternoon's numbers was to be unimpressed with the results, but the mixed quarter isn't bad. Sonos investors will just need to be patient until the current quarter delivers a confirmed return to positive gains on both ends of the income statement.

Why Sonos Stock Spiked on Monday

Why Sonos Stock Jumped 12% This Morning