We posed that question to three Motley Fool contributors. Here's why they picked Abiomed (ABMD -1.22%), Laboratory Corporation of America (LH 0.86%), and Vertex Pharmaceuticals (VRTX 1.23%) as top healthcare stocks to buy in September. 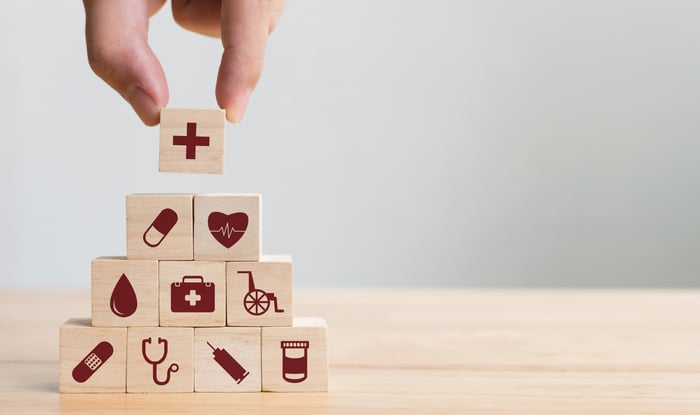 Hold your nose and buy

Brian Feroldi (Abiomed): It can be awfully hard to call a company a "buy" when it trades at a nosebleed valuation and is up almost 150% in the last year. However, I'm willing to go out on a limb for Abiomed because I think it's one of the best healthcare companies on the planet.

At its core, Abiomed is a medical device company that is focused on heart recovery. The company makes a family of minimally invasive heart pumps that are implanted during surgery to help keep a patient's blood flowing. Abiomed is currently the only company in the world that offers a product like this, and it has been growing incredibly fast in recent years as it convinces more hospital systems to use its products.

Abiomed's near-monopoly position has enabled it to pump out jaw-dropping financial results. In the last five years, Abiomed's revenue and net income have grown 280% and 2,760%, respectively. Wall Street has responded to the prosperity by bidding up shares more than 1,500%.

As impressive as Abiomed's run has been, I think there's reason to believe that we are still in the early innings of the company's growth cycle. The company has only penetrated about 10% of its market opportunity in the U.S. and only recently launched in Japan. Abiomed is also actively pursuing a number of label expansion claims that promise to expand the company's total market opportunity even further. That's why I believe that double-digit revenue and profit growth can continue for the foreseeable future.

Offsetting that huge potential is the fact that shares are currently trading for 80 times next year's earnings estimates and more than 24 times sales. Those are tough numbers for any potential investor to swallow. However, my view is that the company's growth potential and competitive position are strong enough to justify the extreme valuation, which is why I recently became a shareholder myself.

How does your doctor know what treatments you need?

Chuck Saletta (Laboratory Corporation of America): Typical medical checkups include some form of lab testing to determine what treatments might be necessary. If the doctor finds something suspicious, chances are good that diagnosis and treatment will require more testing.

As one of the biggest providers of lab tests in the country, Laboratory Corporation of America is well positioned to continue to profit from all that testing. Being already part of so many medical procedures, Laboratory Corporation of America doesn't look like a rapid-growth business. Still, what makes it worth considering buying today is the fact that it looks reasonably priced compared to its prospects.

Analysts are expecting around 11% annualized earnings growth over the next few years from the testing giant, in part because it's leveraging Splunk to ensure its equipment remains effective. That should help drive operating efficiencies to allow Lab Corp's earnings to rise faster than revenues. The company's projected 11% earnings growth is coming from a business trading at around 14 times its anticipated earnings, which makes it a relative bargain in today's market.

Backing up those earnings projections is a solid balance sheet, anchored by a debt-to-equity ratio below 1.0 and a current ratio around 1.4. That balance sheet indicates that even if the company's operations were to stumble for a bit, it has the financial backing to give it a strong chance of recovering before the stumble becomes a crisis.

In a somewhat frothy market, a strong company available at a reasonable price can make a compelling investment. That combination is what makes Laboratory Corporation of America reasonable for your consideration this September.

Keith Speights (Vertex Pharmaceuticals): Biotech stocks and high risk seem to go hand in hand. That's to be expected since biotechs face potential clinical study failures, regulatory rejections, and intense competition even when the first two issues don't materialize. One biotech that I don't think is all that risky right now, though, is Vertex Pharmaceuticals.

Vertex already has three drugs approved for treating cystic fibrosis (CF): Kalydeco, Orkambi, and Symdeko. These products are the only approved therapies that address the underlying causes of CF. They also have helped make the biotech very profitable, with a cash stockpile of $2.8 billion at the end of June.

There are around 34,000 CF patients across the world who can be treated by Vertex's three drugs with their current approved indications. But Vertex thinks that number should jump to 44,000 as it secures label expansions based on age and approvals for additional mutations that cause CF. But the biotech also has triple-drug combos in late-stage testing that could boost the addressable population to 68,000 patients.

Vertex's prior success with its current drugs and earlier clinical studies of its triple-drug combos should bode very well for approval of these pipeline candidates. The chief potential rival for Vertex, Galapagos, reported such disappointing results in June for one of its primary CF drugs that its partner, AbbVie, backed out of a planned study. This means that Vertex is likely to keep enjoying a monopoly in CF for a while, making the stock one of the least risky biotechs around.