Marriott International, Inc. (NASDAQ:MAR) continues to amplify its room inventory while exhibiting steady progress on several key hospitality-industry metrics. Two quarters into the current year, Marriott's global systemwide average daily rate (ADR) has improved nearly 2% to $161.42. Global systemwide occupancy has inched up more than one percentage point against the prior six months, to 73.1%.

Our three loyalty programs lead the industry and are getting better ... While we will retain all three loyalty-program brand names until next year, customers will experience them as one great program.

In late August, Marriott completed the integration of its three loyalty programs -- Marriott Rewards, Ritz-Carlton Rewards, and Starwood Preferred Guest (SPG) -- into a single unified program boasting over 110 million members. As Sorenson points out, the three names will be rolled into a single moniker in early 2019.

The advantage of this merger from a customer perspective is the opening up of Marriott's 29 hotel brands to members of each separate program. Due to equivalence conversions between points across the three platforms, the company says that on average, members are earning 20% more in points per dollar spent than they did before unification.

From Marriott's perspective, revenue per available room (RevPAR) should experience an incremental lift. A unified platform, in terms of user experience, means that customers see the full suite of Marriott's brands when accessing branded web sites and mobile apps. Greater choice spread across a variety of price points should result in higher booking conversions, and a resulting positive effect on RevPAR.

With over 6,700 properties, we are positioned to take care of guests, whether they are on a Midwest road trip, making a sales call in Johannesburg, or enjoying a luxury resort getaway in the South Pacific. This growing breadth of product, and the growing number of earning and redemption opportunities, increases the value of our loyalty program, as guests don't need to look further than our properties virtually anywhere they may travel.

Marriott maintains the largest inventory of hotel rooms globally, and the company intends to extend this advantage for many years, as it also has more inventory in development than any other hotelier. Marriott's total pipeline of rooms in development at quarter-end reached 466,000 -- roughly 25,000 more than the tally at the end of the second quarter of 2017. Sorenson observed during the company's earnings call that of the brand tiers in which Marriott competes, it's responsible for 30% of all rooms under construction in the global industry and 45% of all rooms under construction in North America.

Further increasing the scale of Marriott's reach should result in revenue expansion, as loyal customers flock to new units in both developed and underserved markets. The company appears to be chasing an ultimate goal of ubiquity, but is far from overbuilding; evidence points to Marriott's skill in matching increased capacity to latent demand. For example, the company added 23,000 rooms in the second quarter of 2018 alone, yet RevPAR rose 3.7% year over year, as decent RevPAR growth of 3.1% in North America was augmented by 5.7% growth internationally. 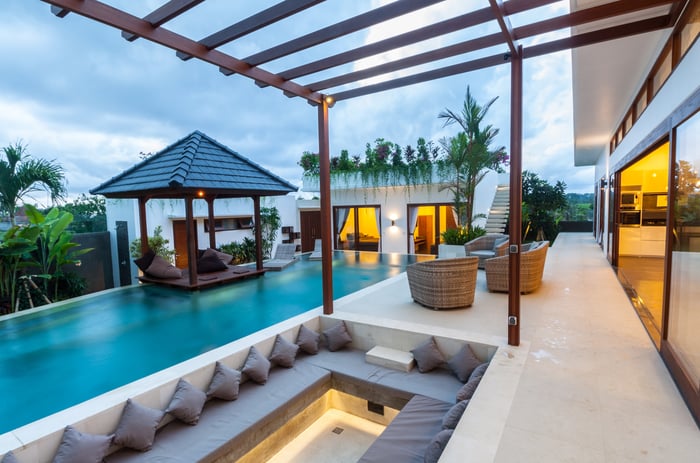 A loyalty program with significant luxury destinations and experiences is magnetic. Dreams about luxury Hawaiian holidays are motivating, particularly for travelers who spend a meaningful part of their lives on the road ... In 2017, the 477 properties in our seven luxury brands represented just 9% of our rooms worldwide, but 17% of our loyalty-point redemptions.

It's no surprise, then, that between affluent core customers and point-redeeming vacationers, the company's luxury collections enjoy enviable occupancy rates. The North American luxury brands' composite occupancy rate of nearly 78% through the first half of 2018 marked the highest occupancy of any geographically grouped brand tier in Marriott's system. Climbing occupancy opens additional opportunities for on-property fee revenue.

Like loyalty and luxury, our booking engines are also a significant competitive advantage. Guests can book our hotels directly through our websites, apps, call centers, [or] group sales offices, or on property.

Increasingly, Marriott is seeking to capture bookings directly instead of relying on online travel agencies (OTAs). As the company has upgraded its booking technology and implemented an advanced revenue yield management system, it's more willing to price-match rates offered on third-party sites -- provided customers book through its loyalty program.

According to Sorenson, two-thirds of transient business in 2017 was booked via the company's direct channels listed above. Marriott says it's focused on direct digital bookings for loyalty members on high-occupancy nights. This is a yield strategy that should appeal to shareholders: During high-occupancy windows, the company should seek to book travelers directly, thus maximizing revenue. It makes little sense to incentivize third-party reservations at promotional rates during periods when substantial demand already exists.

Rather, customers enrolled in the company's loyalty program are being trained to expect reasonable discounts when reserving rooms through Marriott's branded apps. And of course, the garnering of points provides another incentive -- typically, bookings through OTAs generate no loyalty points for customers.

Sorenson cited a somewhat surprising metric which speaks to Marriott's success in securing room nights through proprietary channels: In the second quarter, booked revenue on the company's mobile apps and websites grew faster than booked revenue from OTAs. Simply improving on this trend could boost RevPAR, irrespective of new rooms the company adds to its various markets. Proprietary channels represent a competitive strength with a direct impact on both Marriott's top and bottom lines.