It had long been known that Apple ( AAPL -1.17% ) would launch a more cost-effective iPhone at its September event, alongside its more premium iPhone Xs and iPhone Xs Max. But the actual pricing of that device -- officially called the iPhone Xr -- remained a source of significant speculation. Ahead of the launch, one analyst predicted that the phone would start at $849 "with some flexibility down to $800" -- something that I disagreed with. 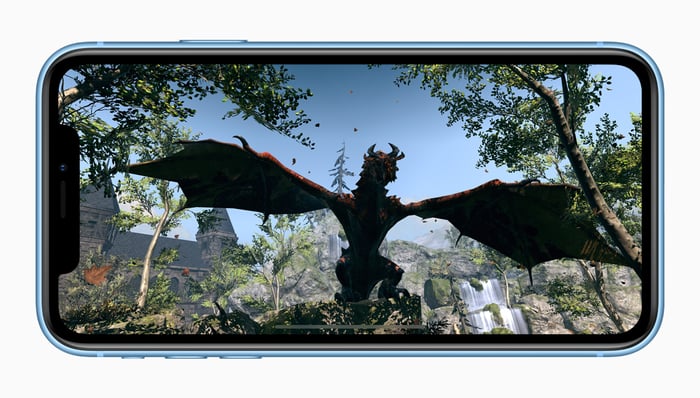 Consider also that Apple tends to discount its previous iPhones as it takes advantage of the fact that manufacturing costs of a product tend to come down over time. Apple dutifully followed that playbook this year, lowering the prices of the entry-level iPhone 8 and iPhone 8 Plus models by $100 each to $599 and $699, respectively.

Value relative to the older iPhone 8/8 Plus

One thing that could potentially be a positive for iPhone average selling prices is that the iPhone Xr seems to better justify the increased price over the older discounted iPhone 8 series models than the iPhone 8 series did over their iPhone 7 series counterparts at the launch last year.

The iPhone Xr has a new form factor relative to the iPhone 8, with a dramatically improved screen-to-body ratio thanks to the use of the company's Face ID technology (allowing it to eliminate the large bottom bezel that it needed to house the home button and fingerprint scanner), as well as a new edge-to-edge liquid crystal display (LCD) that the company markets as a "Liquid Retina HD display."

By contrast, the iPhone 8 series devices looked quite similar to their predecessors and didn't introduce any big changes to how the devices were used relative to the iPhone 7 series.