Barnes & Noble (NYSE:BKS) has been in a slow, steady decline driven by the failure of its digital strategy and a loss of relevance for its stores.

Sales in its most-recent quarter fell again, dropping by 6.9% to $795 million. Comparable store sales dropped as well, falling by 6.1% during the chain's first quarter of fiscal 2019.

In the chain's Q1 earnings release, chairman Len Riggio said: "We fully realize that cutting expenses does not alone provide a path to the long-term viability of any retail business. Therefore, our short- and long-term focus is to grow our top line, and, by doing so, provide us the cash flow needed to grow our business." 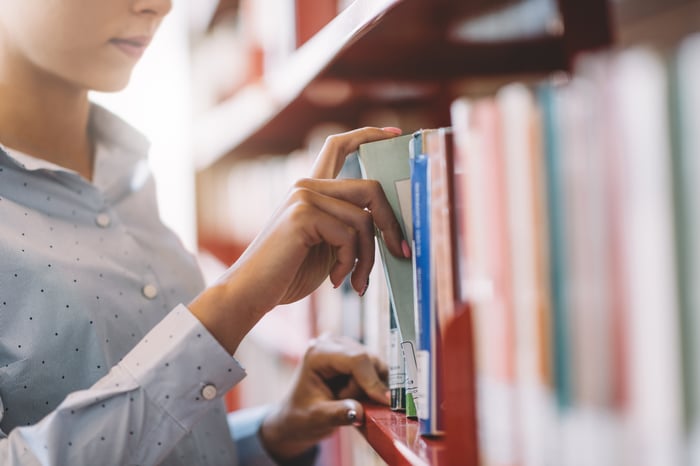 It's worth noting that Barnes & Noble has steadily declined in a strong economy. It lost $16.2 million in Q1, after losing $15.1 million in the same period last year.

Riggio believes that the company has started to turn the corner as its comps did improve during each month of the past quarter. After being down 7.8%, 6.1%, and 4.5% in May, June, and July, respectively, they were only off by 0.8% in August.

That could be taken as a sign the company has improved. It's more likely, however, that it simply shows that the chain is still part of people's back-to-school shopping plans.

Its cash position is OK

Barnes & Noble has done a good job of managing its cash, though you could argue that its layoffs of some senior in-store staff will hurt its ability to recover.

The company finished Q1 having borrowed $179 million of its $750 million credit line. CFO Allen Lindstrom expects that number to increase in Q2 as the chain stocks its stores for the holiday season.

During the Q1 earnings call, which was transcribed by Seeking Alpha (registration required), Lindstrom said: "We expect debt to peak early in the fiscal third quarter commensurate with historical trends. During the quarter, we amended and extended our credit facility through July 2023, which provides us continued flexibility to support the seasonality of our business and execute upon our strategic initiatives."

The problem is that while the bookstore chain has done a lot of behind-the-scenes work to control costs, none of its efforts to revive interest from customers have been successful. Barnes & Noble has held events, changed its merchandise, and upgraded its cafe offerings, but sales continue to slip.

The company does point to its book club as a success. Chief merchandising officer Tim Mantel said during the earnings call that the club has shown that the chain can drive incremental traffic to stores. He was also bullish on the chain's merchandising plans for the holiday season:

By holiday, we will have fully updated our in-store and our on-shelf signage to provide better navigation and to more clearly communicate our promotional offering. We will have also introduced hundreds of in-section shelf talkers to help our customers find a great book through on-shelf recommendations, reading lists, and reviews. To drive sales in books, our goal is to create excitement and stimulate conversation among our customers, and a key way to do this is through well-planned and executed local store events.

Barnes & Noble has been in turnaround mode for years -- and it's not turning around, it's actually slowly sinking. The chain has no real digital strategy, with its NOOK readers having failed. So its business is largely its stores, and success is predicated on getting people to come out more often.

That's a dicey proposition in the current retail environment, as the company could be hurt by declining mall traffic and nearby stores closing. Barnes & Noble can certainly limp along under current market conditions. Should the market take a downturn, however, it could end up in trouble because it's already struggling mightily.