Okta (NASDAQ:OKTA), the leading identity-as-a-service provider, reported another expectations-smashing quarter in its recent earnings report. The move seems to have validated the company's assertion that its Identity Cloud offering has the product, ecosystem, and data advantages I discussed when the company went public a year and a half ago.

Like many small- and mid-cap software companies, Okta still makes losses. Still, even those losses showed incremental improvements, and the case for the company's large market opportunity remains intact.

In the second quarter:

Investors were apparently impressed: Okta's stock rocketed 16.7% the next day, and now trades at an extremely lofty price-to-sales ratio of 24. Clearly there's a ton of excitement around Okta's future -- but how good could it really be? 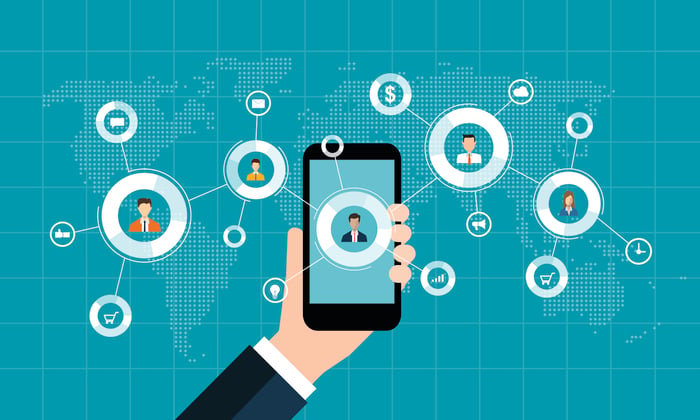 A mighty wind at Okta's back

Any business growing as fast as Okta's is probably riding a big trend. Okta is actually riding several all at once -- CEO Tom McKinnon put it well when he said, "Every organization is moving to the cloud. Every company has to become a technology company, and everyone is worried about security."

Okta is enabling companies to solve those security problems by enabling secure logins across a large enterprise and among that enterprise's suppliers and customers. Integrating with over 5,500 applications and platforms, Okta allows customers to seamlessly secure all of their data and applications without having to write their own internal code.

How big can the consumer-facing market be?

Okta is also benefiting from its new innovations around identity-as-a-service. As the first-mover and leader in the field, Okta has complemented its core employee sign-on offering with a customer-facing sign-on.

This likely is what has the market rather excited. Because while employee sign-on is a compelling market (estimated at $18 billion in Okta's S-1), companies usually have many more customers than employees.

Chief Operating Officer Jacques Frederic Kerrest gave some color to how large the potential market is, though there is considerable uncertainty about the ultimate size:

...when we talk about it being an early market but growing fast, that's the dynamic we're referring to. I think what's interesting to think about is the market for custom developed applications by companies in the world achieves tens and tens of billions of dollars. And all of these applications need to use identity. So if you think about organizations who want to take Twilio (NYSE: TWLO) off the shelf to use them for SMS communication and they want to take Stripe off the shelf to use it for payments, we want to make it very easy for them to take identity off the shelf with Okta and put it right into their application.

A large, growing market that's hard to pin down is clearly leading investors to picture big dollar signs, causing them to bid Okta's stock up to new heights.

In addition, Okta is heavily investing in more security features -- a huge area of interest these days. The company's new ThreatInsights offering incorporates all the data that Okta collects, and displays the whole spectrum of threat activity that is taking place across a customer's platform. The product is only in beta testing at the moment, however, which means ThreatInsights' impact hasn't even been felt yet in the company's financials.

The same goes for ScaleFT, a start-up that Okta purchased last quarter. ScaleFT provides secure administration for server access without a virtual private network. ScaleFT its pretty much an acqui-hire that will bolster Okta's research and development capabilities in its core IDaaS market.

Cloud-neutral software is where it's at

Okta is firing on all cylinders, and executing effectively amid huge tailwinds. It's also benefiting from its cloud-neutral posture, meaning it works with all major clouds seamlessly, enabling it to fend off competition from the giant cloud infrastructure competitors that may have their own ID products. While the stock is awfully expensive, it's hard to argue with this quarter's great results and outlook.