Please ensure Javascript is enabled for purposes of website accessibility
Log In Help Join The Motley Fool
Free Article Join Over 1 Million Premium Members And Get More In-Depth Stock Guidance and Research
By Chris Neiger - Sep 16, 2018 at 7:47AM

Take the plunge with these easy steps.

You've likely heard that setting aside some money every month for an emergency fund as you build up to having enough to cover three to six months worth of expenses is a wise way to keep yourself out of debt. But with many Americans already struggling to cover a $1,000 unexpected expense, many wonder where they can find the money in their budgets to start a savings plan.

If that's you, here are three easy ways to find $100 every single month so you can jump-start your savings. 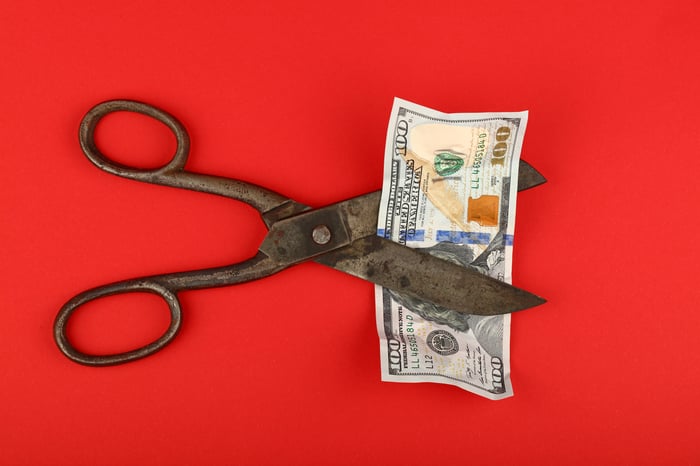 1. Sign up for a cheaper smartphone plan: Potential savings of $25

It's tempting to think that the only smartphone plans available to you are the ones the major carriers offer. But you can save a significant amount of money by going off the beaten telecom path and choosing services from a mobile virtual network operator (MVNO). These companies often charge lower prices for the same or similar cell phone coverage, and you can even keep your existing phone, in most cases.

For example, I recently signed up for a smartphone plan through Mint Mobile that costs me just $20 per month for unlimited talk and text, and 5GB of high-speed data. Mint uses T-Mobile's network, so I'm receiving the same coverage and quality I would get through a major carrier, but I pay a deep discount because I'm buying the coverage at wholesale through Mint.

If you prepay for several months, which I've done, you get the cheapest rates, and they blow T-Mobile's plans out of the water. A comparable T-Mobile plan at 4GB per month costs $45 and a 6GB per month plan costs $55. So at the very least, I'm saving $25 every single month. All I had to do was get a free SIM card from Mint, plug it into the iPhone I already had, and set up an account.

Of course, Mint isn't the only company offering alternative smartphone plans. The largest MVNO in the U.S. is America Movil, which operates under several brands including TracFone, Straight Talk, and Total Wireless, and it offers similarly priced plans that are cheaper than most of the name-brand carriers. If you're leery about switching from one of the big carriers, at least explore different plans with your current cell phone provider. Track your own data usage, and you might find that you can ditch your pricey plan for a cheaper one.

2. Cut out the cable bill: Potential savings of $65

I know, I know -- this idea isn't new, but it's such a simple way to save extra money every single month that it's worth repeating. The average cable subscriber shells out about $85 per month for the service, and satellite customers hand over around $100 every single month. That means many Americans with cable or satellite are spending more than $1,000 a year on television programming! Even if you love watching TV, there are far cheaper options.

Live video streaming services like YouTube TV, Sling TV, and PlayStation Vue cost far less money -- YouTube TV starts at $40 per month, for example -- and often offer many of the same channels. You can even add additional sports and premium channels to your service as well. If you ditched your cable or satellite provider and replaced it with a $40 YouTube TV subscription, you'd save between $45 and $60 per month.

As an added benefit, these video-streaming services don't charge cancellation or setup fees, so you can easily drop the service whenever you want.

3. Find subscription services you're not using: Potential savings of $20

Spotify, gym memberships, Netflix, Birchbox, Blue Apron...we all have our must-have monthly subscriptions, but among the I-can't-live-without are bound to be a few subscriptions that you could comfortably live without. According to a recent study conducted by Waterstone, Americans spend an average of $237 every month on subscription services. The scariest part is that when asked how much people think they spend on subscriptions, respondents guessed they only paid about $111 every month.

The difference between those two figures means there's likely at least one monthly subscription that you can cut out of your budget. Perhaps you pay for both Netflix and Hulu, but you haven't watched one of them in months. Or maybe you're not using your Apple Music or Spotify subscription enough. The point here is to identify at least two subscription services that you're not utilizing enough and cut them out. Scrapping two of the cheapest subscriptions services, at $10 each, would save you $20 every month.

It's easier than you think

By looking at just three areas of a hypothetical budget, we were able to identify $110 worth of potential savings every single month. Of course, you need to examine your own budget to know where you're spending your money and what you can cut out. But these three ideas can act as a guide for you to get started. Once you start examining your spending, you'll likely find even more money you can trim out of your monthly expenditures.