Please ensure Javascript is enabled for purposes of website accessibility
Log In Help Join The Motley Fool
Free Article Join Over 1 Million Premium Members And Get More In-Depth Stock Guidance and Research
By Keith Speights - Sep 16, 2018 at 8:31AM

On one hand, there's the promise of a groundbreaking technology. On the other hand, huge risk. Which hand wins?

There's no hotter gene-editing stock on the market right now than CRISPR Therapeutics AG (CRSP -0.27%). It's up close to 130% so far in 2018, much higher than other biotechs that are also focused on developing gene-editing therapies.

But CRISPR Therapeutics' market cap now stands at nearly $2.6 billion with no products on the market or even in clinical testing yet. Is the stock still a buy at its current price tag? 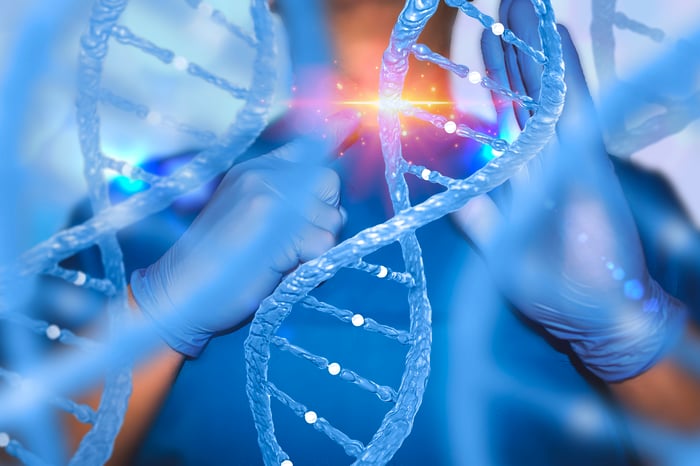 As its name indicates, CRISPR Therapeutics is developing therapies using CRISPR gene editing. Some have called CRISPR the biggest biotech discovery of the century. Using CRISPR, which stands for Clustered Regularly Interspaced Short Palindromic Repeats, scientists can use bacterial enzymes to cut DNA at a targeted location. This targeted editing opens the door to treating a wide range of genetic diseases and even some diseases not caused by genetic mutations.

CRISPR Therapeutics isn't alone in its excitement about the potential for CTX001. Vertex Pharmaceuticals (VRTX 1.23%) announced a collaboration with the small biotech in 2015, a deal that included a sizable up-front cash payment and Vertex buying a stake in CRISPR Therapeutics. In late 2017, the two companies announced that they would co-develop and co-market CTX001.

CRISPR Therapeutics and Vertex are on track to begin a phase 1 clinical study of CTX001 in beta thalassemia later this year. This will be the first clinical study in humans using CRISPR gene editing conducted outside of China.

However, the planned phase 1 study for CTX001 in sickle cell disease was placed on clinical hold by the U.S. Food and Drug Administration (FDA) in May. CRISPR Therapeutics CEO Samarth Kulkarni said last month that the biotech has "a clear path to resolve the current clinical hold."

Success in beta thalassemia and sickle cell disease could realistically make CTX001 a multibillion-dollar product. However, CRISPR Therapeutics isn't just looking at those two diseases. The company is also conducting preclinical testing using CRISPR gene editing for half a dozen other genetic diseases.

Allogeneic therapies are kind of the holy grail for CAR-T. Current autologous CAR-T therapies require taking T cells from a patient's blood, genetically engineering them to target cancer cells, allowing them to multiply, then putting the T cells back into the patient's bloodstream. Allogeneic CAR-T is an "off-the-shelf" approach that uses other individuals' donor cells. Allogeneic CAR-T holds the potential to be faster and much less expensive than current autologous CAR-T therapies.

But tremendous risks, too

The downside for CRISPR Therapeutics is that it's still really early for using CRISPR gene editing in humans. Several potential risks have already been identified with CRISPR.

There are also questions about patent rights. A U.S. Court of Appeals recently announced a decision that was favorable to Editas and not-so-favorable for CRISPR Therapeutics.

On top of all of this, it's possible that other gene-editing approaches are developed that make CRISPR obsolete. While that doesn't seem likely to happen over the next few years, it's nonetheless a real risk.

Is CRISPR Therapeutics a buy?

The stock's valuation is lofty considering how far CRISPR Therapeutics has to go before having an approved product on the market. But if the biotech's gene-editing therapies are successful, the stock should be worth a lot more than it is today. The risks are real, but so is the promise.