The U.S. stock market has soared to record levels recently, pushing forward toward the 10th anniversary of the beginning of the current bull market. Many investors have been worried about the potential for a big downturn. Yet when you look beyond the borders of the U.S., you can already find many bear markets in what were formerly some of the highest-growth areas of the world.

Emerging markets have been under pressure in 2018, as a combination of a rising U.S. interest rates and the threat of global trade barriers has caused a major reversal in interest in emerging market stocks. With many emerging market nations having relied on borrowing in U.S. dollars, currency crises have hit two countries especially hard. 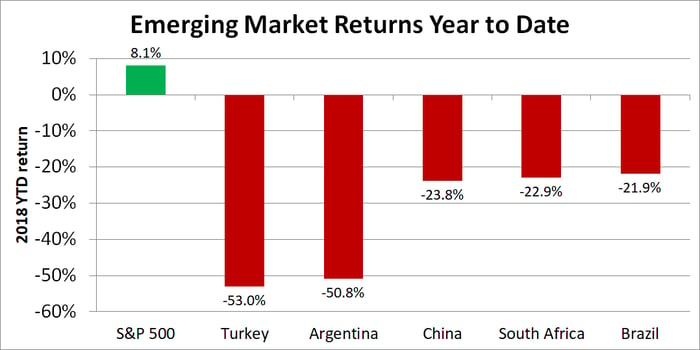 Stock markets in both Turkey and Argentina have seen losses of more than 50% this year, as their central banks have had to boost interest rates dramatically to try to stem capital flight from their borders. Yet even though their losses are less severe, the declines that China, Brazil, and South Africa have suffered could potentially have an even greater overall impact on emerging markets globally. Given these three nations' reliance on trade, any further escalation in the trade disputes that the U.S. has had this year could weigh on their markets even more.

It's easy for U.S. investors to ignore what's happening elsewhere in the world, especially when returns in the markets they follow most closely are strong. But what's happening in emerging markets could spread and cause trouble even for the high-flying U.S. stock market if the problems those nations face can't get solved quickly.