Cronos Group appears to be riding the wave generated by heavy investor interest in its fellow marijuana grower, Tilray.

Shares of Cronos Group Inc. ( CRON 4.40% ) were 22.8% higher as of 2:49 p.m. EDT Wednesday. The Canadian marijuana grower announced a partnership with Aleafia Health to conduct a study evaluating the use of medical cannabis in treating insomnia and daytime sleepiness. But this news probably wasn't the main reason behind Cronos Group's big jump.

The more likely factor for Cronos Group's big move today was a halo effect resulting from Tilray's ( TLRY ) even bigger gain of more than 40%. An interview on CNBC Tuesday evening with Tilray CEO Brendan Kennedy sparked excitement about the prospects for Tilray and for the cannabis industry overall. 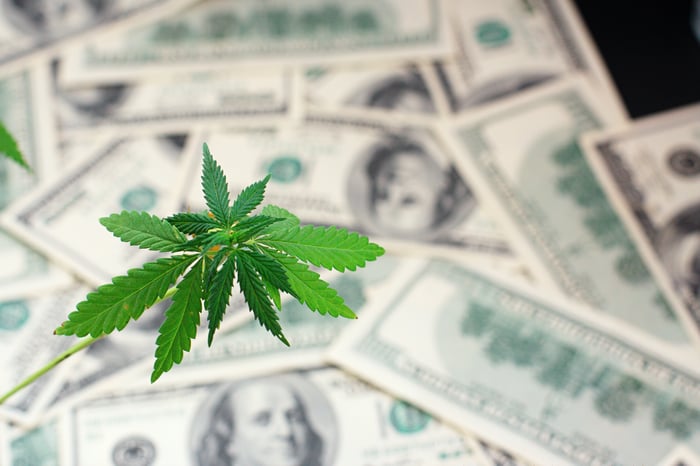 Tilray CEO Brendan Kennedy told CNBC's Jim Cramer that he thinks pharmaceutical and alcoholic beverage companies need to hedge their bets by partnering with cannabis companies. He also predicted that there will be "multiple hundred-billion-dollar companies" in the cannabis industry.

That kind of talk is music to the ears of investors looking at Cronos Group. The company doesn't have a major partnership with a beverage company or drugmaker yet, but it would likely be on the short list of any major players looking to find a cannabis partner.

Cronos Group's announcement of a partnership to study medical cannabis as a potential treatment for insomnia and daytime sleepiness underscores the possibilities for the company in the healthcare space. Progress on this front could arguably make Cronos even more attractive to major pharmaceutical companies.

And if Kennedy is right that there will be several marijuana stocks worth $100 billion or more, there's a reasonable chance that Cronos could be one of them. The company currently ranks No. 5 in terms of market cap among Canadian marijuana growers.

Investors need to remember, though, that Cronos Group doesn't have a deal in hand with any large company yet. There are several other big Canadian marijuana growers in that category as well -- and they could be higher on the list for potential partners than Cronos is.

Cronos Group could certainly move higher, especially if the Canadian recreational marijuana market enjoys a bigger launch than expected or if the company snags a lucrative partnership with a major player outside of the cannabis industry. Investors should be prepared for a potentially bumpy ride, though.