After a slew of analyst downgrades over the last few weeks, Micron (NASDAQ:MU) and other memory chip maker stocks have been clobbered. The industry has been highly cyclical in the past and susceptible to big swings in pricing due to supply and demand changes. NAND memory pricing -- used for storage on things like MP3 players, digital cameras, and flash drives -- has been falling fast. Now worries are mounting that DRAM -- used for storage on computers and a growing list of other things like data centers and cars -- will also decline. As a result, Micron is down more than 30% from its high-water mark reached earlier in the summer.

As of this writing, Micron is valued at seemingly rock-bottom prices, with a trailing and forward P/E of just 4.4 and 3.8, respectively. Fellow Fool contributor Timothy Green does an excellent job of explaining why that's the case here. While I've made numerous calls on Micron over the last few months as shares have declined, I could have done a better job explaining the situation and my purchase strategy. Here's my attempt to clear the air.

What happens when memory falls out of favor

In the past, memory chips have exhibited characteristics of a simple commodity. Small changes in supply and demand send revenues and profits soaring and crashing. Micron illustrates this past problem nicely, as the company has experienced multiple boom–bust cycles in just the last decade. 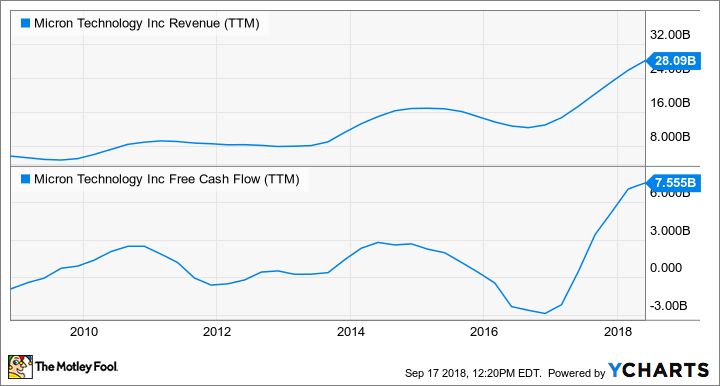 The latest run, which started in 2016, has been particularly strong. A shortage in supply from memory manufacturers was a contributing factor, but demand has also been high. Data center build-out has been booming with growth in the cloud computing industry. Micron's automotive, graphics cards, video game, and connected industrial equipment end markets have also been on the rise. By all indications, the trend for all of those markets looks like a positive long-term one. The side benefit of that is that these new uses for chips help Micron with its goal to increase the complexity of its product so it is less cyclical -- a move that peers like Cypress Semiconductor (NASDAQ:CY) have successfully made in recent years.

However, it would appear the current upswing is coming to a close, or at the very least slowing down. That has caused the stock to drop in recent months. To date, some of the slowing momentum has been masked by higher pricing on chips as well as Micron reducing its costs to keep the bottom line propped up. Nevertheless, the worry is that history will repeat itself and that lean times are right around the corner. 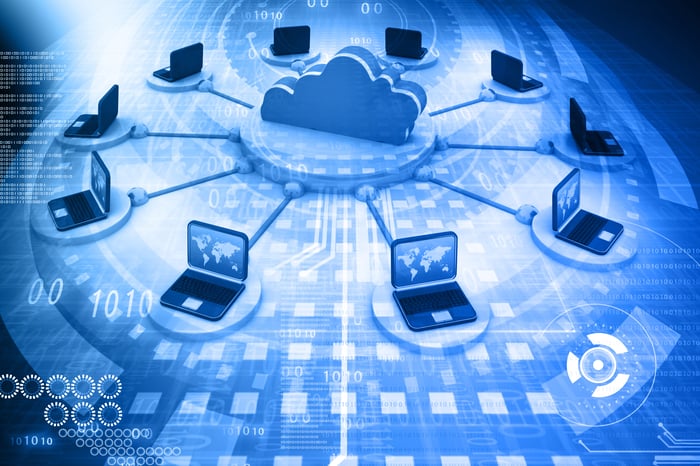 Under CEO Sanjay Mehrotra -- who took the reins in May 2017 -- Micron has been using its recent windfall to pay off debt and initiate a $10 billion share repurchase plan in the 2018 calendar year third quarter. It might seem unconventional to announce share repurchases at the peak of a cycle, but with analyst worries that Micron is already in the midst of a downturn, the plan puts management in position to use cash to buy on the way down and gear up for the next upturn.

That should be investors' plan as well. Micron might look cheap, but that doesn't mean the stock can't continue its slide if business does hit a rough patch. Mehrotra and the managing team have reiterated numerous times that memory chips are not the commodity product they used to be; they are getting more complex with the needs of end customers, and that is leading to more stability on the profitability front. Plus, demand is still expected to rise even as pricing on memory moderates. Nevertheless, the chip industry still goes through cycles, and investors should be prepared.

Given the downside risks, investors who think Micron will rebound ought to keep their initial bets modest. If the stock continues to slide, investors can purchase more shares if the long-term outlook for the company remains positive. That was likely management's thinking with its big share repurchase announcement back in the spring. It should be a bumpy ride, but with memory chips finding new and increasing uses in a variety of industries and Micron's work to strengthen its finances and product lineup, analyst pessimism is setting up buying opportunities for this stock.