But so did its earnings guidance.

When Under Armour ( UA 0.10% )( UAA -0.13% ) told investors in late July that the cost of its ongoing business restructuring would be higher than initially expected, shares plunged more than 13% over the next few days in response.

Early Thursday, however, the performance apparel and footwear specialist increased the price of that restructuring yet again -- only this time, the market rewarded shareholders with a 5% pop. So what gives? 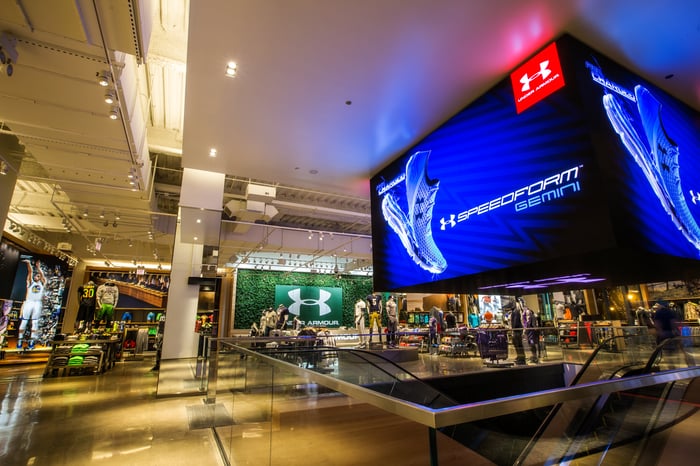 The third time's the charm?

More specifically, Under Armour says "following further evaluation" after its latest quarterly report, it has decided to reduce its global workforce by roughly 3%. The move will result in roughly $10 million of cash severance charges, bringing the pre-tax cost of its restructuring this year to a range of $200 million to $220 million.

This marks the third time this year that Under Armour has boosted the anticipated expenses for the effort. But this modest increase was significantly smaller than the $80 million Under Armour tacked onto its restructuring tab almost two months ago.

Better yet, for anyone wondering whether Under Armour will continue to "identify" new opportunities to refine itself, it also insists this "represents the final component and update to the company's 2018 restructuring plan."

"In our relentless pursuit of running a more operationally excellent company, we continue to make difficult decisions to ensure we are best positioned to succeed," explained Under Armour CFO David Bergman. "This redesign will help simplify the organization for smarter, faster execution, capture additional cost efficiencies, and shift resources to drive greater operating leverage as we move into 2019 and beyond."

The workforce reduction should be fully implemented by the end of March 2019. In the meantime, Under Armour now expects to report an operating loss of $60 million this fiscal year, or near the high end of its previous $50 million to $60 million guidance range. Excluding the impact of its restructuring, Under Armour's adjusted (non-GAAP) operating income will arrive in the range of $140 million to $160 million, an increase of $10 million from the bottom end of its prior range.

To recap, Under Armour is modestly reducing the size of its workforce to streamline the business and better position itself for sustained, profitable growth. It also drew a line in the sand in firmly stating there will be no more revisions to its restructuring plan. And coupled with its positive revision to earnings guidance -- another encouraging sign with only a month left in the current quarter, and with its North American segment only recently returning to growth in Q2 for the first time in a year -- it appears as though Under Armour is finally, once again, operating from a position of strength as it strives to expand its global presence.

So even with Under Armour stock having rebounded 75% from its 52-week lows -- albeit still trading nearly 60% below its 2016 highs -- I think now is a great time for patient investors to consider opening or adding to a position.