Please ensure Javascript is enabled for purposes of website accessibility
Log In Help Join The Motley Fool
Free Article Join Over 1 Million Premium Members And Get More In-Depth Stock Guidance and Research
By Daniel B. Kline - Sep 21, 2018 at 5:47AM

The e-commerce leader is weighing plans to open as many as 3,000 Amazon Go stores by 2021, and many of them might not be what you're expecting.

Sometimes, people stop for a bite at McDonald's (MCD -0.65%) not because of the quality of its food, but because it's quick and cheap. That same logic explains why people eat the meal-like offerings of convenience chains like 7-Eleven or Casey's General Store.

Fast-casual restaurants like Panera Bread and Chipotle (CMG -0.60%) may not be able to deliver your food quite as rapidly, but they've been speeding up the process by adding mobile payment and app-based ordering options. And when patronizing such chains, consumers know the trade-off they're making -- spending a bit more time to get higher-end food. It's a model that has done well by many fast-casual operations in recent years.

Still, in a market where success is driven at least partly by speed, there's room for disruption. And that disruption may not come from the restaurant or convenience store sectors. Instead, it could come from Amazon (AMZN -1.62%). 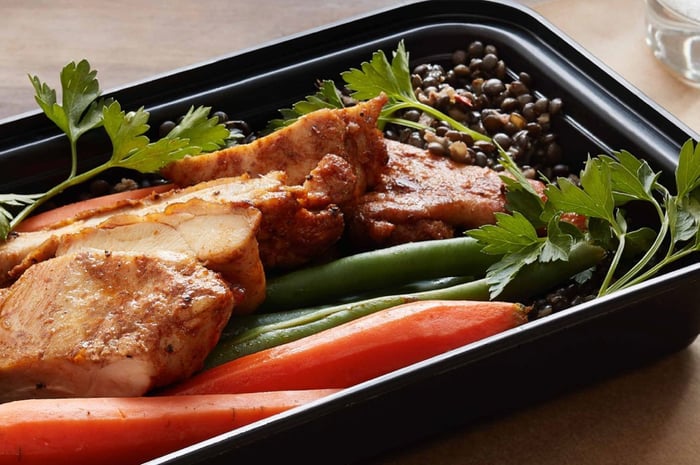 The online retail leader has dipped a toe in these waters by launching a handful of cashierless convenience stores. Some of its early Amazon Go stores offer selections not unlike those of a 7-Eleven (albeit fresher) with prepared meals, sandwiches, and salads alongside a limited selection of groceries and snacks.

However, two Seattle-area Amazon Go locations carry only ready-made meals and snacks. That makes them less an upscale version of a convenience store, and more of a variation on the fast food/fast casual dining model -- but with a self-serve, no-wait twist that offers an unprecedented level of ease for consumers.

Amazon Go shoppers simply open an app, pass their smartphone over a scanner as they enter the store, grab what they want, and leave. Payment is automated, and there's no need to interact with a human, nor any wait for orders to be filled.

The company has not commented on its plans for the brand, though CEO Jeff Bezos did say at a recent Economic Club event in Washington, D.C., that he was very interested in physical stores, but only if they have something new to offer. "If we offer a me-too product, it's not going to work," he was quoted as saying in Bloomberg article, which further noted that Amazon is considering building about 3,000 Amazon Go locations by 2021.

Boosting turnaround speed has been a major focus of fast-food and fast-casual restaurant chains lately. McDonald's now offers mobile order and payment, and it's adding automated ordering kiosks to its U.S. stores at a rapid clip. Chipotle and Panera have both added app-based ordering and payment options too, and made a number of in-restaurant changes designed to accelerate service.

Amazon Go makes all of those efforts look about as modern as using a landline phone to call in a takeout order. The nascent chain's technology could make it a game changer, but speed is not the only factor Amazon needs to consider. Amazon Go might be able to disrupt the the model of convenience stores that offer metal-roller hot dogs and premade sandwiches of unclear origin by simply being more convenient, but a 2015 report from Zagat suggests that speed will need to be paired with quality to upend fast casual.

In that survey, nearly all consumers (94%) ranked food and ingredient quality as the most important attribute of fast-casual restaurants. Cleanliness (46%) and value (45%) also outranked speed (39%) among the things that mattered most to people. Since Panera and Chipotle have built their business models and their images around offering quality food  -- and even McDonald's has stepped up its efforts in that area with its premium burger line -- Amazon Go would likely have to offer a similar level of  quality if it truly hopes to make a mark in the restaurant space.

That doesn't mean Amazon has to go that route to succeed here. Convenience is clearly the more important attribute for some consumers, as the continuing success of chains like McDonald's and 7-Eleven demonstrates.

But Amazon has the technology to offer ultra-convenience. It also has the wherewithal -- thanks in part to its purchase of Whole Foods -- to offer high-quality, affordable grab-and-go meals. That combination could make the e-commerce giant a major player in the fast casual/fast food space.