The under-the-radar utility stock has dropped 20% in the last year. Does that create an opportunity for long-term investors?

Investors would be forgiven for overlooking National Grid ( NGG -1.02% ) when evaluating utility stocks. Over half of the company's asset base is located in the United Kingdom, along with its corporate headquarters. That means it reports financial performance in pounds, and it's a lot easier to avoid currency conversions and the painful effects of currency exchange rates, which have significantly weighed on the business in recent years thanks to a strong U.S. dollar.

However, the business is investing heavily to expand its American asset base -- and therefore its future rate base in the country -- which generated a record 49% of total operating profit in fiscal 2018. In fact, the company has $5 billion of capital expenditures planned in New York alone in the next three years. Considering the plans for long-term growth, and a healthy dividend yield well over 5%, should opportunistic investors considering National Grid stock a buy? 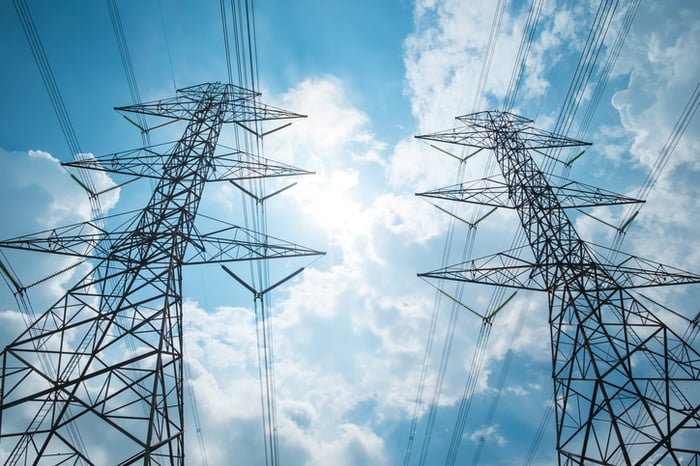 It's common practice for European companies to report financial results in half-year increments, rather than the quarterly updates provided by their North American counterparts. National Grid's fiscal year ends in March, which means investors won't learn of the business' performance for the fiscal first half of 2018 (or, for the six months ended September 30) until sometime in November. That also means the latest data are for fiscal 2018. How'd the business fare?

While analysts weren't thrilled that the usually steady U.K. electricity business encountered a double-whammy of falling revenue and rising per-unit costs, investors should be encouraged by the performance of U.S. assets and the NG Ventures segment -- both of which contain important near- and long-term growth prospects for the business. Here are some highlights from fiscal 2018 compared to the prior year.

The main takeaway for investors is that the business remains on track to execute its growth strategy. While the U.K. electricity business took a step backwards in fiscal 2018, the segment is expected to deliver annual net revenue growth of over $100 million, or approximately 4%, in the current fiscal year. Importantly, the new Hinkley-Seabank transmission project, which weighed on shares last year following a spat with regulators, was approved in early August.

National Grid is also successfully increasing its U.S. asset base, which could become the top profit engine within the next few years. It's certainly the most important segment when it comes to growth. It will be critical to achieving the stated goal of increasing the total asset base 20% from fiscal 2018 to fiscal 2021. That would earn the business significant rate base increases in the early 2020s.

Investors should also keep an eye on NG Ventures. Although small and seemingly insignificant today, the segment houses various future-oriented projects including liquefied natural gas (LNG) activities, renewable energy investments, electric vehicle charging stations, robotic natural gas pipeline inspection technology, and smart meters. It could prove critical to the long-term trajectory of National Grid -- and it's slated to receive a healthy amount of capital investment over the next three years. 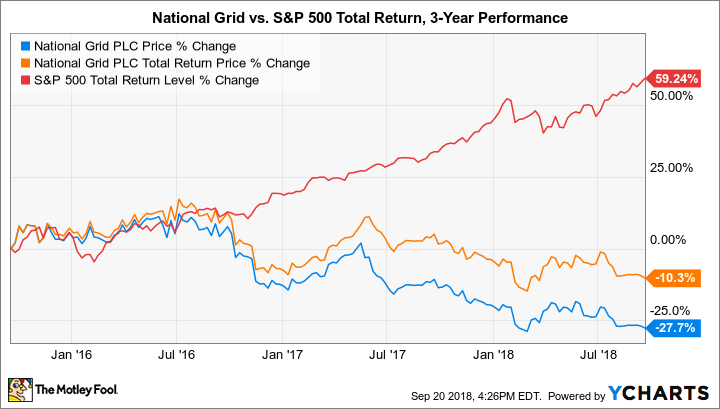 Slow and steady growth with catalysts on the way

The regulated nature of the utility industry means long-term growth is essentially guaranteed, albeit a little slower than other industries. However, that predictability allows utility stocks to distribute handsome dividends and trade at a relative premium.

That makes the nearly 20% slide in National Grid stock in the last year a little eyebrow-raising. A strong U.S. dollar has created some headwinds and increased the value of the company's debt, but a nearly $10 billion decrease in market cap is very much an overreaction. I think that creates a buying opportunity for long-term investors, especially when the near-term catalysts are considered.

Aside from the U.K. natural gas distribution business (National Grid sold a 61% stake in the unit in fiscal 2017), the company's remaining business units are slated for growth in fiscal 2019. The company is in the process of increasing its presence in the United States and continues to invest in future-oriented technologies. Simply put, with fiscal first-half 2018 results -- and the announcement of the next dividend payment -- on the way in November, investors could finally see the stock head in the right direction after years of sliding.